2022 NBA Draft: AJ Griffin, Jabari Smith latest prospects with advantage of being a son of a former pro player 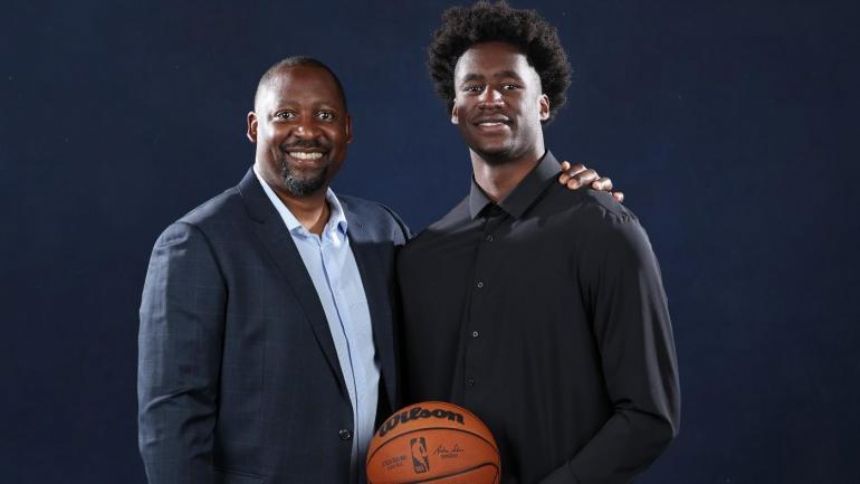 At some point in each of the last five games of the NBA Finals, Golden State deployed a lineup that featured four players whose fathers played in the NBA. While eventual NBA Finals MVP Stephen Curry boasts a well-documented basketball lineage through his father, Dell, it's a trait Curry shares with Klay Thompson, Andrew Wiggins and Gary Payton II from the Warriors' championship roster.

Each of the four are second-generation pros and examples of a trend that will be on full display at the NBA's next big event after the Warriors' championship parade on Monday. When NBA commissioner Adam Silver takes the stage at Barclays Center in New York on Thursday to announce the first pick of the 2022 NBA Draft, it's a near guarantee that he'll be calling the name of a player with a family with a high-level basketball history.'

While there are no guarantees in basketball scouting - even prospects with great familial legacies suffer injuries or meet other struggles - pedigree has emerged in recent years as a key component in the evaluation of basketball talent.'

It's no coincidence that four of the top seven players on the AP Sports NBA Draft Big Board have a parent who played in the NBA, WNBA and/or was a college athlete.

Prospects with an NBA mindset

"It doesn't just mean they're coming in with a more polished skill set or advanced athletic gifts - they're also coming in with a deeper understanding of what it takes to succeed in the NBA and the type of mindset it takes to achieve that success," said David Mincberg, the former director of scouting for the Memphis Grizzlies who most recently worked as an assistant general manager for the Detroit Pistons.

On seven occasions in the last 35 years, teams have used a top-five draft selection on a player whose father was also drafted into the NBA. Four of those seven players went on to become All-Stars. Of the four (Andrew Wiggins, Danny Manning, Al Horford and Kevin Love) three are still active players. Two of the other three (Mike Bibby and Mike Dunleavy Jr.) enjoyed tremendous careers. The third, Jabari Parker, enjoyed significant production early in his career before a bad run with injuries and the evolving expectations of NBA power forwards slowed his production.

It's a small sample size, but the 57.1% hit rate on top-five picks becoming All-Stars if they are the sons of former draft picks, compares favorably to the 39.1% All-Star rate for all other top-five picks from the 2006 through 2015 NBA Drafts. Anecdotally, though, the evidence for family connections as a positive in prospect evaluation is even stronger.

"If a guy's got a pedigree, it's like 'OK, he understands how hard you have to work and he understands the level he'll have to compete at on a nightly basis and why it's important to develop the right habits, be a good teammate and be coachable player,'" Mincberg said. "If he's the son of someone who has played at a high level and has been under that type of scrutiny, he's going to understand what the pressure of playing in the NBA looks like, the grind, the travel, all of it."

As it pertains to the 2022 NBA Draft, no one more than AJ Griffin. His father, Adrian Griffin, played nine NBA seasons, has coached in the league since 2008 and is currently an assistant for the Raptors. AJ's brother Alan played at Syracuse, his sister Aubrey plays for UConn's storied program and his mother Audrey ran track at Seton Hall.'

While Banchero, Smith and Ivey are regarded as sure bets to be selected in the top half of the lottery, projections on Griffin vary more widely. He's the player with the deepest parental ties to NBA basketball, but he also grasps the limitations of his lineage in determining his future.'

The NBA Draft isn't the lone realm in which an athletic family plays a significant factor in evaluating basketball prospects. In fact, 247Sports scouting director Adam Finkelstein believes it is particularly significant in the evaluation of early-stage high school prospects.

"It's really counterintuitive evaluating young kids, because the best long-term prospects more often than not are the ones for who it hasn't clicked physically yet," Finkelstein said. "I think knowing family pedigree is even more important for the younger prospects."

"You get an advantage of the wisdom and the knowledge, but you've still got to learn how to do it on your own, too." ' Duke's AJ Griffin

So while having athletic parents is poised to play a particularly significant role at the top of the upcoming draft, its significance won't be diminishing anytime soon in the collegiate or pro games.'

There is a reason Class of 2023 guard DJ Wagner has been ranked at or near the top of his class over the years. Yes, he is supremely talented and the son of former lottery pick Dajuan Wagner. But the lineage doesn't stop there.

DJ's grandfather, Milt Wagner, is a Louisville basketball legend and longtime pro, meaning DJ is on track to potentially become a third generation NBA draftee as early as 2024.

"Great athletes are unique and certainly rare," Mincberg said. "But when you get to the NBA, once you're at that threshold it's usually something mental or something with your mindset why you don't make it. The importance of having an NBA mindset, it can't be overemphasized. These guys are so impressive."

Fathers and sons who have been selected in the NBA Draft.