After trip back home to Czechia, Krejci returns to Bruins 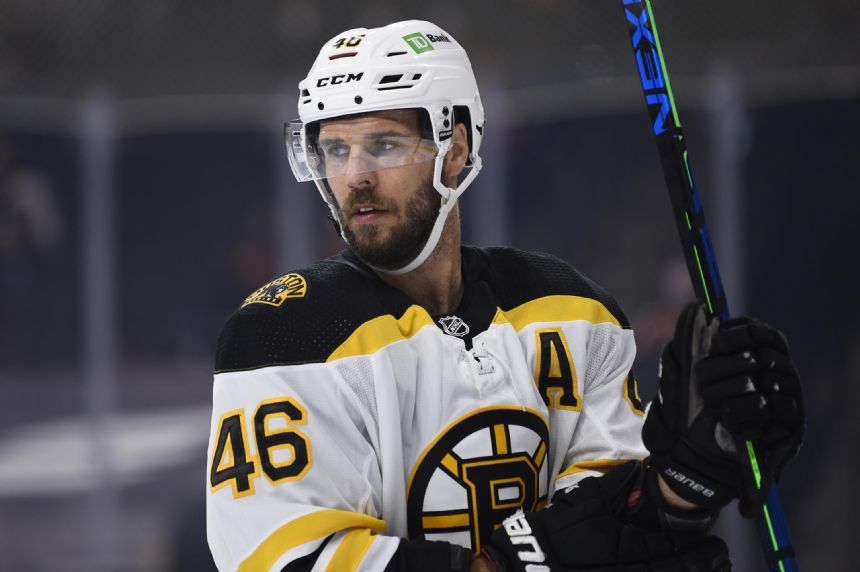 BOSTON (AP) - When David Krejci decided to return to the NHL after a year playing in his native Czechia, there was only one option.

With Bruins captain Patrice Bergeron deciding to play another year and fellow Czech David Pastrnak also recruiting his countryman, Krejci re-signed with Boston this week to make one more run at the Stanley Cup.

"I told my agent: 'Just get a deal done. Do what you've got to do, let's just get it done. I want to be a Boston Bruin next season,'" Krejci told reporters Tuesday, a day after Bergeron had a teleconference to discuss his return.

"Obviously, there was a B plan, but I never wanted to go that way," said Krejci, who will be paid $1 million, with the potential to earn $2 million more in incentives. "I didn't want to play anywhere else. I'm more than happy that I'm a Bruin again."

A 14-year veteran whose 730 career points puts him ninth on Boston's all-time list, Krejci led the team in regular-season and playoff scoring during its 2011 championship run. The team returned to the Stanley Cup Final in 2013 and again in '19.

Krejci opted to play in the Czech Republic last season so that his children could experience his homeland and bond with their grandparents. He led HC Olomouc with 20 goals, 26 assists and 46 points in 51 games.

"It was even better than I thought it would be. Just being with my family pretty much every day, it was special," Krejci said. "I'll remember that forever, it was amazing. Being at home, showing my family where I grew up. My oldest daughter went to school. It was a great experience. I'm obviously going to miss it, miss my family, my friends, my teammates from last year - but I feel like I'm back where I belong."

Krejci said he kept in touch with his Bruins teammates and saw many of them at Tuukka Rask's late July wedding in Italy. Krejci also played with Pastrnak - whom he called "one of the best players in the world" - on the Czech team that won a bronze medal at the world championships.

"That was kind of a turning point in my decision, coming back to the NHL," Krejci said. "Just playing with him, just kind of seeing what we can still do together, it was pretty cool."

After losing in the first round of the playoffs last year, the Bruins fired coach Bruce Cassidy and replaced him with Jim Montgomery. Krejci said he made his decision before the coaching change, and it had no impact on his decision.

"That would be a good story if I would say yes," he said. "But my decision was made before they hired the new coach."

Krejci and Bergeron, 37, help the Bruins avoid a complete roster overhaul. With 34-year-old Brad Marchand, they are the only players remaining from the 2011 NHL championship roster.

But with Pastrnak, who is 25, on offense, 24-year-old Charlie McAvoy on defense and 22-year-old Jeremy Swayman in net, the team could put together one more run at a title before the core of the three-time Stanley Cup finalists completely disbands. (Marchand and McAvoy will miss the start of the year after offseason surgery.)

The Bruins also acquired forward Pavel Zacha - another Czech - from the Devils and signed him this week to a one-year deal worth $3.5 million. Zacha, 25, scored 15 goals with 21 assists for New Jersey last year.

Zacha said he had never played on an NHL team with another player from his homeland. With Jakob Lauko and Tomas Nosek also on the roster, the Bruins have five.

"It's going to be exciting for me to be on a team with some Czech players, but also players that are really, really good players, the guys in the locker room," Zacha said. "So that's it, I'm just super excited to play there."