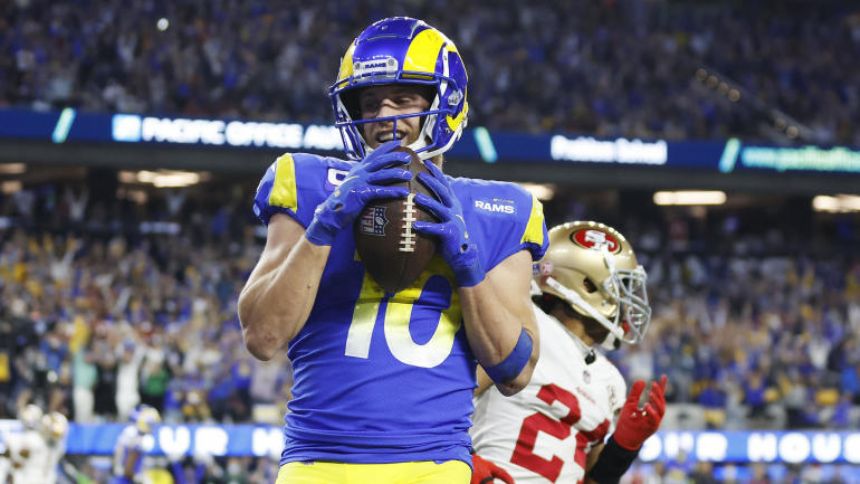 This time last year, Davante Adams, DeAndre Hopkins or Stefon Diggs probably would have been the odds on favorites to produce the greatest NFL season ever for a wide receiver in 2021. Instead, Cooper Kupp trumped them all.

Kupp was named 2021's NFL Offensive Player of the Year because of his efforts. It was just the second time since 1993 that a wide receiver won the award.

Kupp raised his game during the Rams' playoff run. In four postseason games, Kupp caught 33 passes for 478 years with six touchdowns. He earned Super Bowl LVI MVP honors after catching the game-winning touchdown pass with just 1:25 left to play. Over a 17-game season, these numbers project to 140 catches, 2,032 receiving yards and 26 touchdown receptions.

Nobody has ever won the receiving triple crown, NFL Offensive Player of the Year and Super Bowl MVP in the same season. Jerry Rice, who is widely considered as the greatest wide receiver of all time, is the only other player to accomplish these feats during an NFL career.

Kupp's historic season has coincided with the wide receiver market going haywire, which has left him underpaid. He signed a three-year, $47.25 million extension (worth a maximum of $49.5 million through salary escalators) averaging $15.75 million per year in 2020.

Not too long ago, the $20 million-per-year mark was the Holy Grail for wide receivers. That isn't the case anymore. It's beginning to become a common occurrence.

There were four $20 million-per-year wideouts (Keenan Allen, Amari Cooper, Hopkins and Julio Jones) when the offseason began. Ten wide receivers have hit the mark even with the Titans releasing Jones. The number will continue to grow before the 2022 regular season starts because 2019 draftees Terry McLaurin (Commanders), DK Metcalf (Seahawks) and Deebo Samuel (49ers) are in contract years.

The Chargers got the ball rolling by signing Mike Williams to a three-year, $60 million contract with $40 million fully guaranteed before the March 8 deadline teams had to designate franchise players. Williams' deal makes the Chargers the only NFL team with two $20 million-per-year wideouts. Allen signed a four-year contract extension averaging $20.025 million per year with $50 million of guarantees during the 2020 preseason.

The Buccaneers struck next with Chris Godwin. Conventional wisdom suggested Godwin would hit the open market when he tore the ACL and MCL in his right knee late in the 2021 regular season but he was franchised for a second straight year at $19.18 million this time around. He signed a nearly identical three-year, $60 million deal to Williams' shortly after quarterback Tom Brady unretired.

The next big move was the Raiders acquiring wide receiver Davante Adams, who was designated as a franchise player, from the Packers for 2022 first- and second-round picks. Adams signed a five-year, $140 million contract with the Raiders. There are $65.67 million in guarantees, of which $42.75 million was fully guaranteed at signing in the deal. The maximum value of Adams' contract is $141.25 million because of an annual $250,000 Pro Bowl incentive.

Signability became an issue for the Chiefs with wide receiver Tyreek Hill after the Adams deal. He was dealt to the Dolphins for five draft picks: 2022 first-, second- and fourth-round picks in addition to 2023 fourth- and sixth-round picks. Miami gave Hill a four-year, $120 million extension, which has $72.2 million in guarantees with $52.535 million fully guaranteed at signing.

The Bills remedied Diggs being underpaid after outperforming the five-year, $72 million extension (worth up to $81 million through salary escalators) he signed with the Vikings in 2018. He received a four-year, $96 million extension with $70 million in guarantees where $47.985 million was fully guaranteed at signing. Incentives reportedly make the deal worth up to $104 million.

Diggs' $24 million-per-year extension averages signifies that the inflated values of Adams and Hill's deals for bragging rights are being minimized by teams in negotiations. On paper, Adams became the NFL's highest-paid wide receiver (by average yearly salary) ahead of Hopkins, who signed a two-year, $54.5 million extension with the Cardinals in 2020. Adams' five-year, $140 million deal is really $67.5 million over three years because there's $72.5 million in the last two years. He isn't going to play 2025 and 2026 for $36.25 million each when he's 32 and 33 years old. Hill has the distinction of being the NFL's first $30 million-per-year non-quarterback with his four-year, $120 million extension. Realistically, it's a three-year extension for $75 million because of $45 million in 2026, the final contract year.

Most recently, the Titans surprisingly traded 2019 second-round pick A.J. Brown to the Eagles during the first round of the 2022 NFL Draft for 2022 first-round and third-round picks. Brown was rewarded with a four-year, $100 million extension containing $57,220,471 of guarantees in connection with the trade. Fortunately for Kupp, the Rams recognize his pay inequity. Kupp has two years remaining on his contract worth $29.5 million. He is scheduled to make $14.875 million, which is base salary, on an $18.675 million salary cap number this year. There is $14.625 million of compensation in 2023, also base salary, where Kupp's cap number is $18.425 million. Kupp has easily outperformed this contract.

The Rams have dealt with similar circumstances at the wide receiver position in recent years. Nobody expected Robert Woods, who was traded to the Titans in March for a 2023 sixth-round pick, to become one of the NFL's most productive wide receivers when he signed a five-year, $34 million contract (worth up to $39 million with salary escalators and incentives) in 2017 as an unrestricted free agent. Over the 2018 and 2019 seasons, Woods was one of seven players with at least 175 receptions and 2,350 receiving yards. Several days after Kupp's deal in 2020, Woods signed a four-year, $65 million extension ($16.25 million per year) worth up to $68 million through salary escalators when he had two years left on his contract

New deals for Kupp and three-time NFL Defensive Player of the Year Aaron Donald are offseason priorities for the Rams. Kupp would be justified in insisting upon becoming the league's highest-paid wide receiver after his season for the ages. He made it clear that topping the wide receiver pay scale isn't important to him when meeting with the local Los Angeles media three weeks ago as the offseason workout program was starting.

Kupp's mindset should be a relief for the Rams. However, "fair" is a relative term that can be left up to interpretation. Under the concept of fairness, Kupp is likely to concede that $22.5 million and $25 million per year should be used as the values of Adams' and Hill's contracts. If taking a hardline approach to negotiations, which Kupp isn't, he might be adamant about using the artificially inflated amounts of $28 million and $30 million per year, respectively, as the values of these deals.

A range of fairness can be created by calculating the average of the three, five and 10 highest-paid wide receivers. These amounts listed in the chart below use the realistic values of Adams' and Hill's contracts.

Based on this chart, $22 million to $26 million per year can be considered a "fair" deal for Kupp.

Among the wide receivers in the $20 million-per-year club, Diggs' situation is most analogous to Kupp's. Before his new deal, Diggs had two years remaining on his contract. Like Kupp, Diggs had outperformed his contract. He led the NFL in receptions and receiving yards in 2020. Kupp and Diggs are comparable statistically over the last two seasons with Kupp being slightly more productive. Diggs had 230 catches for 2,760 yards with 18 touchdowns in 33 games while Kupp caught 237 passes for 2,921 and scored 19 touchdowns in 32 games.

Both Diggs and Woods signed four-year extensions with two years left on their contracts. There's a big difference in the cash flow of these two deals. Woods' deal is backloaded, meaning there is more new money in the latter part of deal than in the early years. Diggs has a favorable cash flow. It's on par with the four-year extensions quarterbacks have received with two years left on contracts over the last couple of years. This is surprising because quarterbacks contracts customarily have better cash flow than deals at other positions.

The four-year, $134 million extension (worth as much as $147.95 million because of incentives and salary escalators) the Rams gave Jared Goff in 2019 is the most relevant of these quarterback deals. The chart below compares the percentage of new money Diggs, Goff and Woods earn after each new year of their respective contracts. The cash flow for a neutral deal is also included. A neutral deal is neither front-loaded or backloaded.

Kupp should draw the line on cash flow and other structural elements of the deal since he isn't pushing to be the league highest-paid wide receiver. Neutral cash-flow percentages ought to be Kupp's worst-case scenario, which would be a major concession on his part. The closer Kupp is to the $22 million per year low end of fair, the better his cash flow should be.

Fifty million fully guaranteed at signing could be appropriate depending upon where Kupp's deal ultimately is in the range of fairness. This would essentially be fully guaranteeing the first two years of Kupp's deal (2022 and 2023). Overall guarantees comparable to Diggs' $70 million would also seem reasonable under the circumstances.