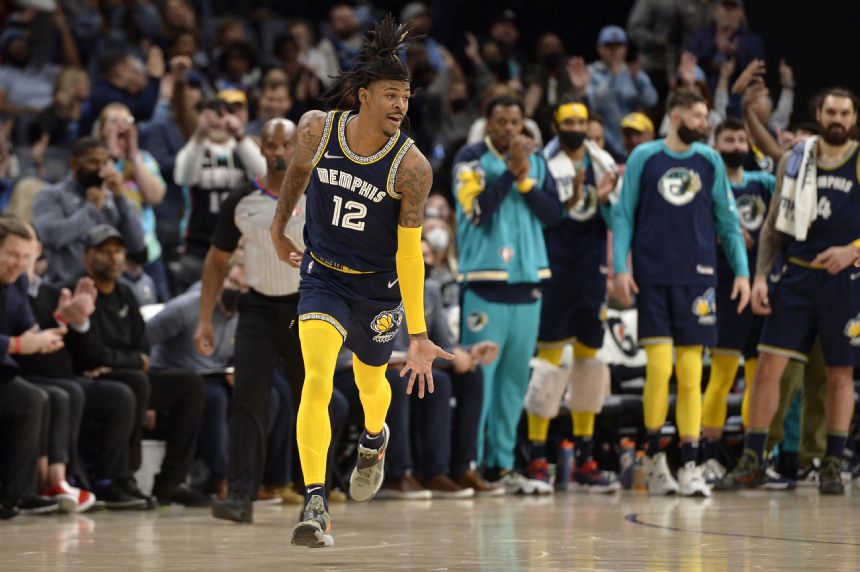 MEMPHIS, Tenn. (AP) - Ja Morant had 30 points, 10 rebounds and 10 assists as the Memphis Grizzlies pulled away in the fourth quarter to beat the Utah Jazz 119-109 on Friday night.

It was the fourth career triple-double for Morant, Memphis' third-year point guard who was named an All-Star starter on Thursday.

Danuel House Jr. led the short-handed Jazz with 21 points, while Mike Conley finished with 15 points and six assists. Bojan Bogdanovic and Jordan Clarkson had 13 points each for Utah, which lost its fourth straight and 10th of 12.

The Grizzlies maintained their hold on third place in the Western Conference, moving 3 1/2 games in front of the fourth-place Jazz.

Memphis led by as many as 14 points before its advantage began evaporating midway through the fourth quarter. The Jazz moved within 105-101 when Royce O'Neale connected on a 3-pointer with 4:40 left.

But Utah got no closer as Memphis built its lead back to double digits.

Jazz: Four years after leaving Memphis, where he played his first 12 seasons, Conley still is beloved in the city. After the fans cheered Conley, they immediately resorted to boos for Joe Ingles. ... Mitchell missed his sixth straight game and Gobert his third.

Grizzlies: Jackson's also also had six blocks against San Antonio on Wednesday and has 45 over his last 11 games. ... Memphis hadn't won a home game over the Jazz since Jan. 15, 2019. ... A video celebrating Morant's first All-Star selection drew a standing ovation during the first timeout.

Jazz: At Minnesota on Sunday.