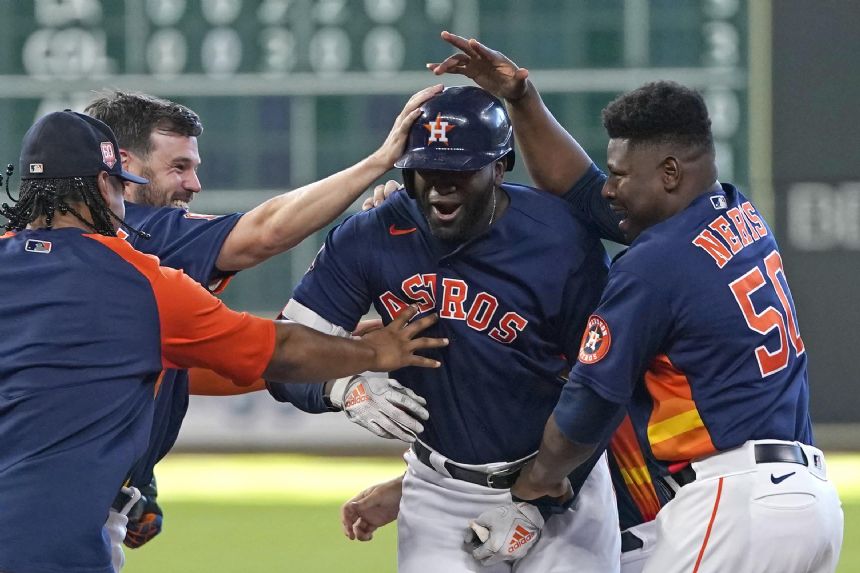 HOUSTON (AP) - Yordan Alvarez hit an RBI single with one out in the 10th inning to lift the Houston Astros to a 3-2 win over the Seattle Mariners on Sunday.

Mauricio Dubon started the 10th as the automatic runner on second and the Mariners intentionally walked Jose Altuve. Dubon advanced to third on a sacrifice fly by Yuli Gurriel. Alvarez then laced a grounder off Brennan Bernardino (0-1), who was making his MLB debut, to left field to send Dubon home and start the celebration.

The Mariners were playing without star rookie Julio Rodriguez, who was placed on the injured list with a bruised right wrist Sunday after being hit by a pitch a night earlier.

The AL-West leading Astros scored two runs in the first inning to take the lead. The Mariners used a two-run homer by Jesse Winker in the eight inning to tie it.

Corey Dickerson also homered for the Cardinals, who broke the game open in the fourth inning against starter Josiah Gray (7-7).

Washington star Juan Soto was 0 for 3 with a walk. Soto is one of several Nationals who could be dealt before Tuesday's trade deadline. Washington has the worst record in the majors at 35-68 and went 6-19 in July.

Pallante (4-4) allowed five hits in eight-plus innings and earned his first road victory for St. Louis. He struck out a career-high eight and walked one.

PITTSBURGH (AP) - Alec Bohm fell a triple shy of the cycle and matched a career best with four hits as Philadelphia completed a four-game sweep of Pittsburgh.

Bohm hit his seventh homer of the season in the sixth, a solo shot that gave him four hits on just five pitches and extended Philadelphia's lead to seven runs. Nick Castellanos also had four hits, with his fourth single coming in the ninth. Kyle Schwarber hit his NL-leading 33rd homer.

Abreu and Leury Garcia had two hits apiece for the White Sox, who trailed first-place Minnesota by three games entering the day.

Cease (11-4) allowed a run and four hits, striking out seven and walking one in winning his fourth straight start. Liam Hendriks picked up his 20th save in 23 opportunities.

BOSTON (AP) - Xander Bogaerts, J.D. Martinez and Christian Vazquez each had an RBI double as Boston won for the fourth time in 17 games.

Boston, which had a season-high eight doubles, was 3-7 on a season-long homestand and 8-19 in July.

Ex Red Sox outfielder Hunter Renfroe hit a two-run homer over the Green Monster for the second straight day and went 4 for 4 for NL Central-leading Milwaukee, which lost for only the second time in nine games since the All-Star break.

ATLANTA (AP) - Austin Riley hit a run-scoring double off Mark Melancon in the ninth inning and Atlanta completed a three-game sweep of Arizona.

Max Fried, Dylan Lee and Kenley Jansen (5-0) combined on a four-hitter for the Braves.

Matt Olson singled with one out in the ninth against Melancon (3-9) and scored when Riley's double hit the fence in right-center on two hops. Olson slid headfirst, easily beating the throw.

Cleveland won its first series against the Rays since August 2017 and ended a long stretch of games on the road with a 6-5 record.

Reliever Kirk McCarty (2-2) allowed one run, four hits and two walks in 3 1/3 innings. Emmanuel Clase worked the ninth to get his 23rd save.

Guardians rookie Steven Kwan extended his hitting streak to 14 games on a first-inning bunt single. He also threw out Brandon Lowe, who tried to score from second on Randy Arozarena's fifth-inning single.

Jeff McNeil singled twice and doubled, and Mark Canha also had three hits for the NL East leaders, who won their sixth straight and finished with a season-high 19 hits - 12 against Lopez.

Lopez (7-6) struck out one in 2 2/3 innings, one of his shortest starts of the season. The Marlins snapped a 20-inning scoreless skid on Jacob Stallings' RBI single in the fifth.

Vladimir Guerrero Jr. and Bo Bichette had RBI doubles as the Blue Jays have won 12 of 15 overall after taking three of four from the Tigers.

Berrios (8-4) allowed three hits, including a solo home run to his brother-in-law, Tigers shortstop Javier Baez. Berrios walked one and struck out six. Jordan Romano finished for his AL-leading 24th save in 27 chances.

The Tigers made four errors Sunday, giving them seven in the four-game series. None of Toronto's runs Sunday were unearned.

CINCINNATI (AP) - Brandon Drury reached 20 homers for the first time in his big league career when he hit a tiebreaking drive in the eighth inning to give Cincinnati a win over Baltimore.

Drury entered as a pinch hitter in the sixth inning and broke a 2-all tie in the eighth with his homer off Felix Bautista (3-3).

Alexis Diaz (3-1) won despite allowing a tying home run in the eighth to Anthony Santander. Buck Farmer got his first career save in six chances.

Santander had three hits, including his 19th homer, and extended his hitting streak to 11 games.