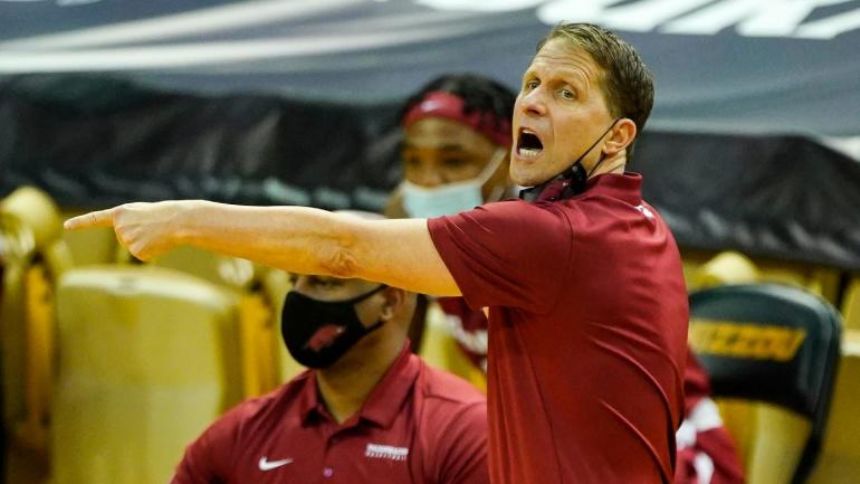 Arkansas coach Eric Musselman will miss at least his team's next two games after undergoing shoulder surgery to repair injuries he suffered in a practice earlier this season, the school announced Thursday. First-year assistant coach Keith Smart -- a former NBA head coach for the Cavaliers, Warriors and Kings -- will serve as interim coach during Musselman's recovery.

The Razorbacks (11-5, 1-3 SEC) play at No. 12 LSU on Saturday and host South Carolina on Tuesday. After losing five of six games, Arkansas got back on track Wednesday night with an 87-43 thrashing of Missouri to send Musselman to the operating room on a positive note. The 57-year-old third-year coach of the Razorbacks tore tendons in his shoulder during what Dr. Wesley Cox described as a "significant collision with a player" during a practice nearly six weeks ago.

"The goal was to use daily physical therapy and treatment as well as a steroid injection to delay the surgery as many weeks as we could, none of which have offered any significant improvement," Cox said in a statement released by Arkansas. "At this time, surgery to repair the tears was necessary due to the amount of pain and instability he was experiencing and to mitigate the risk for significant complications in the future. Coach Musselman is expected to do very well and ultimately make a full recovery."

Coach had successful surgery to repair his torn rotator cuff this morning. He's home resting and won't make the trip to LSU this weekend, but we know the team is in good hands!

Huge thank you to Dr Cox and his amazing staff, and to everyone that has sent prayers and well wishes pic.twitter.com/x4xHpr8Ybw

Smart joined the Arkansas staff this season after last working as an assistant for the New York Knicks in the 2018-19 season following a well-traveled professional coaching career that included a 93-170 record as coach in the NBA for parts of four seasons. He is best known in the college game for hitting the game-winning shot for Indiana in the 1987 national championship game.