Auburn's bats wake up as it bounces Stanford from CWS 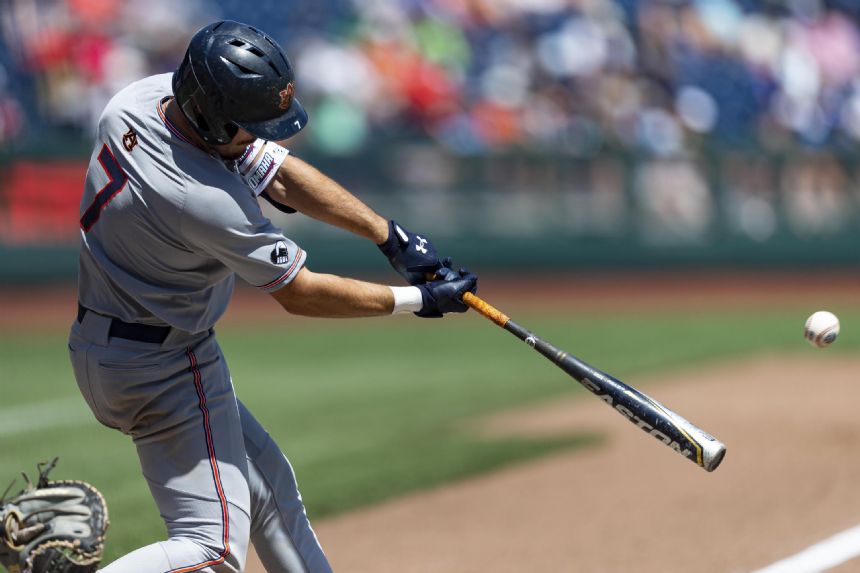 OMAHA, Neb. (AP) - Cole Foster's three-run double in the sixth inning gave Auburn the lead, and the Tigers beat No. 2 national seed Stanford 6-2 in a College World Series elimination game for their first win in Omaha in 25 years.

The Tigers (44-21) will play Tuesday against the loser of Monday night's game between Arkansas and Mississippi.

Stanford (47-18) concluded a short, disappointing stay in Omaha. The Cardinal lost their opener against Arkansas 17-2 - the most lopsided game here in 34 years - and then did next to nothing after taking an early lead against Auburn.

Stanford, which staved off elimination five times in its regional and super regional, went 0-2 in a CWS for the first time in 18 appearances.

Trace Bright (5-4) went five innings for the win and Blake Burkhalter, the Tigers' star closer, struck out six of the eight batters he faced for his 16th save.

The Tigers, who lost 5-1 to Mississippi on Saturday, had managed one run and seven hits in 14 innings before breaking out in the sixth against the Cardinal.

Foster, who doubled twice, was back in the lineup after leaving in the middle of Saturday's game because of illness and dehydration. Auburn coach Butch Thompson said before Monday's game that seven or eight of his players have had a stomach virus.

Stanford starter Drew Dowd, who struggled with his fastball command his last few appearances, was dialed in through the first four innings. But he gave up Brooks Carlson's double leading off the fifth and walked Foster on four pitches to bring on Quinn Mathews (9-2).

Mathews got Stanford out of the inning but ran into trouble in the sixth, giving up two singles, hitting a batter and issuing a walk before Foster's bases-clearing double off the wall in left center put the Tigers up 4-2. Auburn added two more in the seventh.

Stanford had an opportunity to cut into the lead in the seventh when it loaded the bases with two outs against Tommy Sheehan. That's when Auburn called on Burkhalter, and he went to a full count against Brett Barrera before blowing a fastball past him for an inning-ending strikeout.

Barrera and Adam Crampton hit RBI doubles off Bright to put the Cardinal up 2-0. Bright retired 10 of the last 11 batters he faced.