Barcelona sells more assets as it hopes to register players 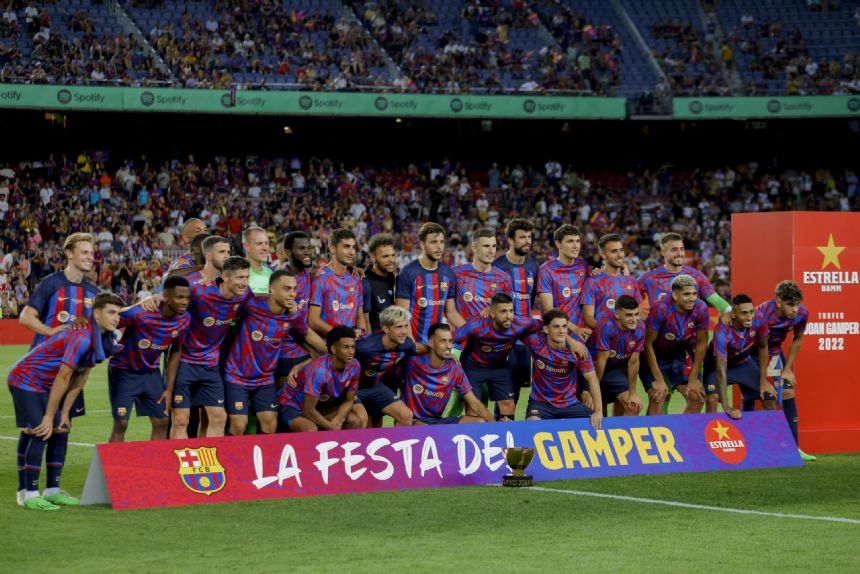 BARCELONA, Spain (AP) - Barcelona has sold off even more of its club assets in the hopes of meeting the Spanish league's financial rules so Robert Lewandowski and its other signings can play in the season opener.

Barcelona said Friday that it had agreed to sell 24.5% of its Barca Studios production hub to Orpheus Media in a deal that would earn it 100 million euros ($103 million).

Last month Barcelona sold an initial 25% stake in its production hub to Socios.com, a blockchain provider, for another 100 million euros as well as 25% of its Spanish league television rights for the next 25 years for nearly 670 million euros ($689 million).

All told, the heavily indebted Catalan club has mortgaged its future for 870 million euros ($895 million) in order to sign Lewandowski from Bayern Munich along with other talented newcomers.

Regarding the sale of nearly 50% of its production hub, Barcelona said in a statement that "with this investment the strategic partners in Barca Studios show confidence in the value of the project and the future of digital content in the world of sport."

It also comes with Barcelona yet to register its new signings with the Spanish league. Barcelona opens the season on Saturday at home against Rayo Vallecano.

Thanks to the money it has made by selling its assets, Barcelona has been able to strengthen its squad by signing Lewandowski, winger Raphinha and defender Jules Kounde for a combined 160 million euros ($165 million).

But the Spanish league has strict financial requirements that limit the amount clubs can spend on players' salaries and transfers based on the clubs' financial health. Despite efforts to reduce costs and pay down its debt, Barcelona still holds 1 billion euros ($1 billion) in debt and has seen its salary cap slashed by the league in recent seasons.

So, as of Friday morning, it had not registered Lewandowski, Raphinha, Kounde, free agent arrivals Franck Kessie and Andreas Christensen, or Ousmane Dembele and Sergi Roberto, who both signed new contracts recently after their old ones had expired and so are considered new signings by the league.

This new injection of another 100 million euros should help Barcelona's financial balance that it presents to the league and increase its chances of being able to register all those players.

The club is also pushing to sell players such as Samuel Umtiti and Martin Braithwaite that are either unwanted by coach Xavi Hernandez or have big salaries like Frenkie de Jong.

Teams have until the end of the month to register new players if they want to play in the Spanish league this season. Real Betis is also still waiting to register several players.

Barcelona club president Joan Laporta said recently that he was confident that his club will be able to field its latest acquisitions.

But it would be yet another blow to Barcelona's reputation if its star signings are not able to play at Camp Nou on Saturday.