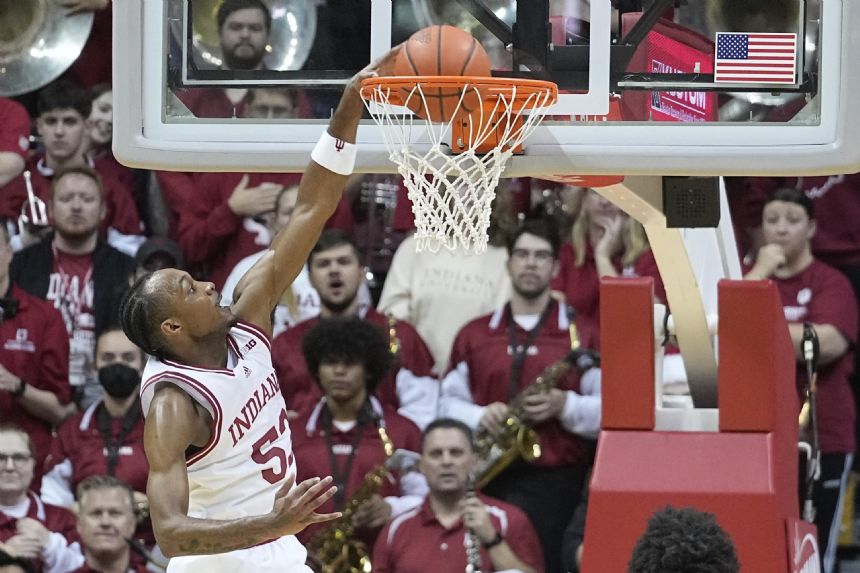 Johnson and Bates each made four 3-pointers and had four assists to help the Hoosiers start 6-0 for the second straight season. Preseason All-American Trayce Jackson-Davis finished with 11 points and five rebounds in 19 minutes after sitting out Wednesday's game with a sore back.

Jackson State was led by Trace Young with 13 points. Ken Evans Jr. had 10 points and seven rebounds for the Tigers (0-5), who trailed by double digits for the final 30 minutes.

Johnson's back-to-back 3s spurred the initial 14-3 burst that gave the Hoosiers a 25-13 lead midway through the first half. Bates then scored nine points in an 11-2 spurt that made it 36-15.

Jackson State closed to 41-28 in the final minute of the half, only to see Bates knock down a shot-clock buzzer-beating 3 with 5 seconds left. And Johnson made another 3 early in the second half when the Hoosiers sealed the outcome with a 10-0 run.

Jackson State: Not much has gone right in coach Mo Williams' first season. It blew an 18-point lead against Little Rock on Sunday, came up short Wednesday at Michigan and struggled mightily at Indiana. While it seems things can only get better from here, Jackson State needs to make steady improvement to become more competitive.

Indiana: The Hoosiers are exactly where they expected to be heading into next week's showdown with No. 1 North Carolina. They're unbeaten, have won five straight at home and are building momentum. Now come the more challenging tests, which will show Indiana where it actually fits in this season's college basketball pecking order.

As the Hoosiers keep winning, they appear to be on the cusp of cracking the top 10 for the first time since 2017. All they need now is a little help from other teams this holiday weekend.

Indiana: Hosts No. 1 North Carolina on Wednesday in the ACC-Big Ten Challenge.