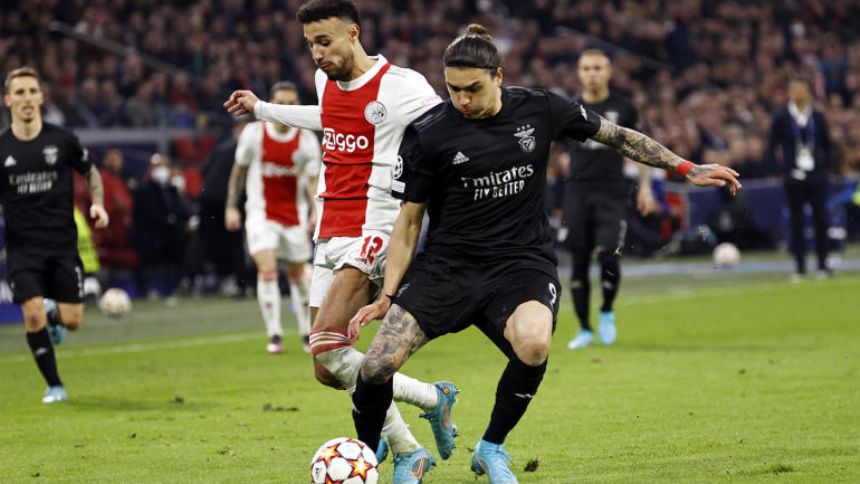 SL Benfica are the surprise name in the UEFA Champions League quarterfinal draw after eliminating AFC Ajax 2-1 on aggregate after Darwin Nunez secured a 1-0 victory at Johan Cruyff Arena on Tuesday against the odds.

Erik ten Hag's men were heavily fancied to advance at their Portuguese opponents' expense, but the way of relentless attacking which was expected never materialized as Nelson Verissimo's side limited their hosts to just two shots on target and scored with their only effort.

Sebastien Haller had scored at both ends in Lisbon as Dusan Tadic and Roman Yaremchuk also tallied at Estadio da Luz in an open and entertaining first leg, only for attacking chances to be at a premium the second time around as Benfica kept Ajax at bay brilliantly.

Nicolas Otamendi shook off an ankle knock to partner Toekomst graduate Jan Vertonghen upon his return to the Dutch capital while Alex Grimaldo got forward brilliantly on the left and provided the only goal of the game 13 minutes from time with a perfect set piece delivery onto Nunez's head.

The Uruguay international is now only second to Nuno Gomes' five-goal tally from 1998-99 as Benfica's best single-season Champions League scorer in the modern era after getting his fourth here which points to a remarkable result akin to FC Porto knocking out Juventus to reach last season's quarterfinals.

It was a late sucker punch and one which the Aguias had been playing for pretty much all game and pulled off expertly to secure an unexpected place in the Champions League's final eight to add their own pedigree of two historic titles to the mix.

It is the first time since 2016 that Benfica have reached the quarterfinals and that outing against Bayern Munich was the 18th time the Portuguese powerhouse had made it that far until now with Bela Guttmann's 100-year curse from 1962 still holding strong.

Verissimo's men will be fancied by pretty much every side left in the draw, but they have shown themselves capable of upsetting the apple cart in the group stage by advancing ahead of Barcelona and again by ousting this Ajax side -- who is to say they will not find another way through?

Meanwhile, for Ten Hag and his players, the dream of another deep Champions League run is over and there will now be a realization that for many this might have been the final chance to make it to the final stages with talismanic playmaker Dusan Tadic among those uncharacteristic ageing stars.

The warning signs were there in the weeks between Leg 1 and Leg 2 and perhaps Ajax's unconvincing form showed Benfica the way past them but there will be no underestimating the disappointment felt at how their attack was foiled.

11 - Sebastien Haller is the first player to score 11+ goals in a Champions League season without playing in at least the quarter-final stage. Support-act. #UCL pic.twitter.com/Q5bJkV3M0q

Haller will be especially devastated as his 11 goals make him the first player to hit that tally without reaching the quarterfinals while Ajax should be worried by the fact that they have not won in their last nine home Champions League knockout games.

Benfica deserve their last eight berth based upon their second half on home soil and their entire 90 minutes in Amsterdam but there will be few, if any, winnable draws to come from here and it might be a challenge to keep things respectable against those who have proved more prolific than Ajax.