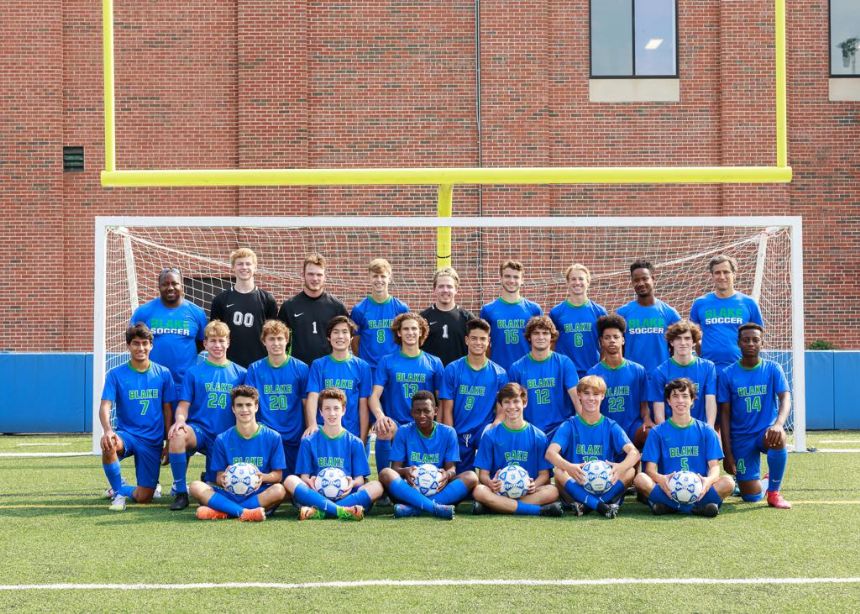 CHESTER, Pa. (AP) - Andre Blake shook his head at the photo that captured the Jamaican goalie carried off the pitch on the shoulders of his Philadelphia Union teammates.

Blake was swooped up by the Union after stopping two penalty kicks that ushered the franchise straight into easily the biggest game in its Major League Soccer history - Sunday's Eastern Conference final against New York City FC. Blake's Instagram photos and stories this week were loaded with action shots and Union players mobbed in celebration. He even threw in an inspirational quote from Muhammad Ali.

Unlike the pressure-packed kicks faced against Nashville, the "great picture" gave Blake pause.

"I intentionally did not post that picture at all because I didn't like it," Blake said. "It almost shows like I'm on top of everybody else, which for me, is never the case. It's teamwork. I was able to make a few big plays but there was a lot that happened before that."

The Union made pretty much all the big ones and won the shootout against Nashville 2-0 after the teams remained tied at 1 after 30 minutes of overtime. Jack Elliott scored for the Union in the PK and 18-year-old Jack McGlynn stroked a left-footed shot - then stoked the fans that had the home stadium of more than 18,500 shaking when he tapped his right foream to show ice flowed through his veins.

No one has been quite as cool under pressure as Blake.

The 31-year-old out of May Pen, Jamaica long ago delivered on Philadelphia's decision to take him with the No. 1 pick of the 2014 draft. He's a two-time MLS Goalkeeper of the Year and had 12 shutouts this season (11 wins, one draw), making 76 saves and posting a 0.96 goals against average in the regular season.

But if Blake needed any more reason to prove why his name will one day end up in the Union's Ring of Honor, his case was cemented against Nashville.

He hit the ground to his right and smothered MVP candidate Hany Mukhtar's first penalty kick for Nashville. Mukhtar buried his face in his hands as Union fans roared. Blake, waving his arms in net like he's doing jumping jacks, then got air on a dive to his right and used every inch of his wingspan to deny Anibal Godoy. With Blake in their heads, Nashville missed wildly on the next two kicks to seal their defeat.

"When you see your best kicker miss, naturally it's going to send a message," Blake said this week at the Union's training field. "I think that really had an impact on them, a negative impact. Following up with the second save, I think they were done because those were their two better players on the field. To see those two players miss, I think after that, they were a little rattled.

"We all know what happened after that."

Up next, a first shot in their 11th season at playing for the MLS Cup.

The Union caught a huge break when New York City FC upset the top-seeded New England Revolution that meant the East final would be played in front of nearly 20,000 fans at Subaru Park, along the Delaware River waterfront.

The Union caught another break when NYCFC's Valentin Castellanos, who won the MLS' Golden Boot award as the league's top scorer, was suspended for the East final for getting two yellow cards against the Revolution.

Led by the rabid supporters group called "Sons of Ben," the final sold out within 24 hours and standing-room only tickets - of which the Union make about 1,000 available - inched toward $200 a pop this week on the secondary market.

With the Phillies locked out, and the Flyers and 76ers scuffling this season, the Union have become a hot topic in Philly sports. The Union delivered a more improbable upset when they knocked the Philadelphia Eagles off the backpage of Monday's Delaware County Times - complete with the Blake photo - that ran with a "Spot On" headline.

The triumph was felt in Blake's hometown, where friends and family packed the Kick Out Sports Bar & Lounge he opened in May Pen ("you want to try the jerk chicken pasta, for sure") and all TVs on Sunday will be turned on to the Union.

Blake has tried to take his stardom in stride, leaning on his faith and humble roots in Jamaica where he was one of seven boys in his family. He played cricket and soccer and admits his first love wasn't stopping goals, it was scoring them - he was a promising striker as a teen.

"Every time I get a chance to run around, I do it," he said. "I just have a love for soccer. I can play any position. Maybe not as good as goalkeeper. But you put me anywhere, I understand the game."

Blake caught the attention of a local scout who recommended the prospect to UConn coach Ray Reid. Blake had a sensational career with the Huskies and had 36 shutouts over three seasons. He had serious talks at the draft combine with Vancouver and thought his MLS career would start up North, until the Union - which feigned little interest in him - made a surprising draft-day trade with rival D.C. United to pick him.

"People forget, Andre had to fight to get his starting job, even on this team," seventh-year coach Jim Curtin said. "It took a little while, it tooks years before he was the starter. But when he got a hold of it, he ran with it."

Blake's career has taken him around the world, and he's the starting goalie for the Jamaican national team. He still has his sights set on a job in the Premier League, the top level of European football.

"I'm not going to give up on that dream until it's over," he said. "If I could sign myself, I would have been there already. Unfortunately, that's not how it goes. They say flourish where you are."

"I'm still trying to calm down and stay back grounded after that big one," he said. "It's just kind of finding a way to almost forget what happened and be ready for Sunday."

Maybe this time instead of getting hoisted off his feet, Blake will be the one doing the heavy lifting.

"We can lift the trophy," he said.