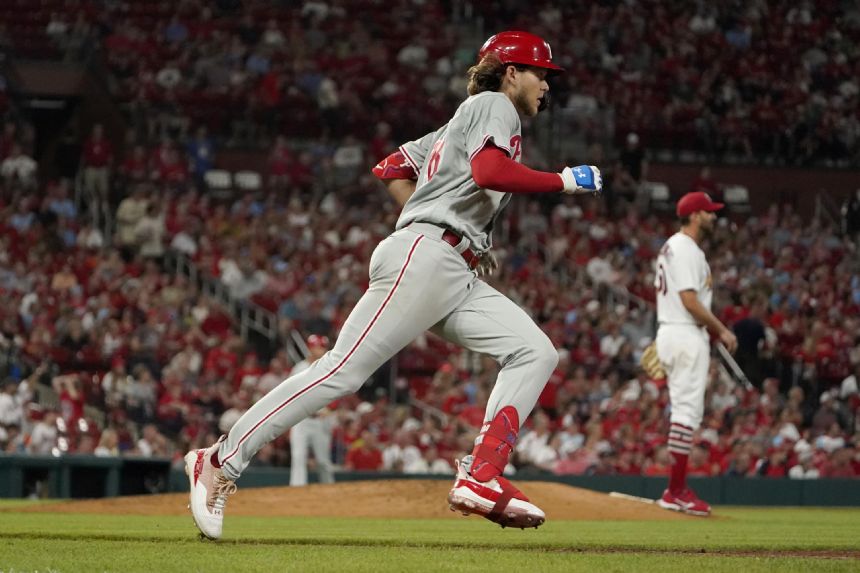 Bohm homered 419 feet to center field to lead off the sixth inning for the Phillies' first run. He hit his sixth homer of the season into the left field seats with two outs in the eighth for his first career multihomer game.

The first of a four-game series began with a 56-minute rain delay.

'The Phillies won for the sixth time in eight games, and the Cardinals have lost seven of their last eight.

Wheeler (8-4) duplicated his performance from Sunday night against St. Louis by pitching seven scoreless innings. He limited the Cardinals to five hits with one walk and struck out five. Seranthony Dominguez pitched the eighth, and Brad Hand came in for the ninth to get his fourth save in five opportunities.

The 40-year-old Wainwright (6-7) pitched nine innings for his longest outing this season. He allowed five hits and struck out three with no walks.

He made his fifth consecutive start without Yadier Molina behind the plate. The last time Wainwright made five starts without Molina was a six-start stretch from July 14-Aug. 10, 2019, when Molina was out with a right thumb tendon sprain. Molina, who has been behind the plate for 316 of Wainwright's career starts, has been sidelined since June 15.

Paul Goldschmidt has been voted as starter at first base for the National League, beating New York Mets star Pete Alonso in the two-person voting finals. Goldschmidt garnered 67 percent of the vote for a spot in the starting lineup at the 92nd Midsummer Classic at Dodger Stadium in Los Angeles on July 19. It is Goldschmidt's first time to be chosen as a member of the Cardinals and first since 2018. He was voted to the team in his previous six seasons with the Arizona Diamondbacks.

Cardinals: Activated LHP Genesis Cabrera (COVID-19) from the IL. ... RHP James Naile was optioned to Triple-A Memphis and Redbirds RHP Angel Rondon was designated for assignment. Cabrera, who threw a live bullpen on Tuesday in Atlanta, has missed the previous 12 games since June 25.

Cardinals: OF Tyler O'Neill (left hamstring strain) has his return delayed after he was hit by a pitch on the left wrist in a at-bat in Memphis on Wednesday. A MRI revealed some bruising but no fracture. The club will conduct more tests and evaluate him Monday. ... OF Corey Dickerson (calf muscle) has rejoined the major league club and will likely be activated off the IL this weekend. ... John Mozeliak, president of baseball operations, said RHP Jack Flaherty (right shoulder strain) is not expected to return before the trade deadline on August 2. ... Mozeliak said C Molina (right knee inflammation) is feeling better but not quite ready to resume baseball activities. He is rehabbing in Puerto Rico and will go on a rehab assignment before rejoining the club.

Phillies: Kyle Gibson (4-3, 4.91 ERA) struggled on the mound in his previous start last week against St. Louis, giving up seven hits and six runs across four innings on the mound, including four straight home runs to begin the game.

Cardinals: Dakota Hudson (6-5, 4.29 ERA) had a difficult start against Monday in Atlanta, where he allowed nine hits and six runs. It was the second nine-hit and six-run appearance of the season for Hudson.