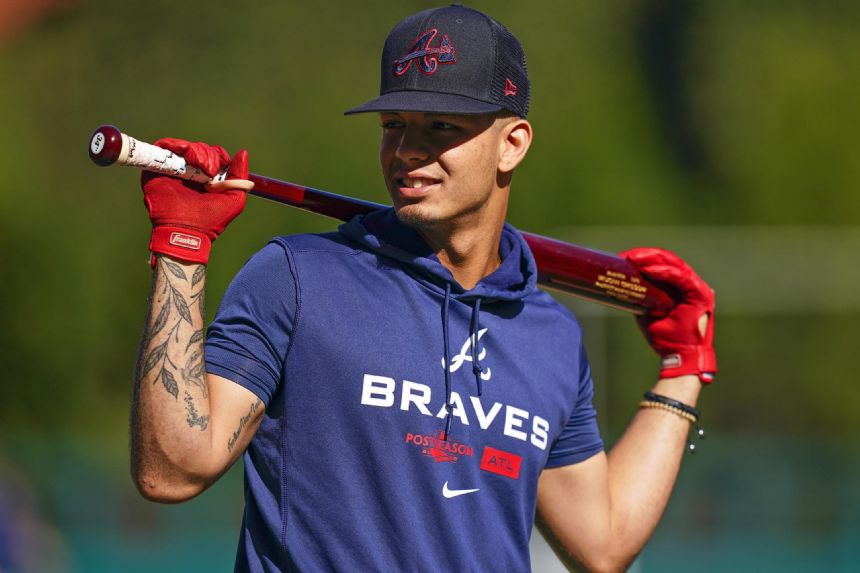 ATLANTA (AP) - The Atlanta Braves' commitment to giving Vaughn Grissom a chance to win the starting job at shortstop can't be questioned.

First, the Braves, who must replace Dansby Swanson, scheduled Grissom for three offseason visits with third base coach Ron Washington for intense fielding drills, each lasting at least one week.

On Saturday, manager Brian Snitker said he hasn't even considered giving Grissom the chance to compete for playing time in left field this spring. Snitker and the Braves want Grissom to spend all his time at shortstop.

Then, Grissom was included with other prominent players made available to reporters at the Braves Fest for fans on Saturday. Projected starters at every position other than left field took turns in the media interview room. Grissom was the only shortstop on the list.

Grissom started 39 games at second base as the fill-in for the injured Ozzie Albies and only one game at shortstop last season. At 6-foot-3 and 210 pounds, Grissom has a big build for a shortstop, and some doubt his defense will be strong enough to hold the job.

Washington, the 70-year-old former Texas Rangers manager respected for his defensive drills, has assured the Braves that he'll have Grissom ready by the start of the season.

"That's probably one of the most valuable pieces I have in my life right now, being able to bounce stuff off him," Grissom said of Washington.

Washington volunteered for the offseason work with Grissom.

"He was like, 'Let me have that kid for three different times,'" Snitker said. "It was great Vaughn took the time out of his winter and went down there and saw the value in it. It will be good. He's definitely going to have a leg up getting to spring training and having all of that."

Grissom pounced on the opportunity.

"I was stoked," he said. "I loved it. I couldn't wait to go for my first time already."

The 22-year-old Grissom will compete with Orlando Arcia to replace Swanson, who signed a $177 million, seven-year deal with the Chicago Cubs. Like first baseman Freddie Freeman, who signed with the Dodgers as a free agent before the 2022 season, Swanson was a respected team leader, and his departure leaves a void.

There will be a spotlight on either Grissom or Arcia.

"We're going to be fine," Snitker said. "We'll use the sum of our parts to make it happen."

Snitker left open the possibility that Grissom and Arcia could share the job.

"I think that's two really good options we could probably team up and not abuse either one of those guys and have a really good product," Snitker said.

Grissom said he's ignoring speculation that positive reviews from Washington make him the favorite to win the starting job.

"It's reassuring in a sense," Grissom said. "It's cool, but baseball is a crazy sport. It's very humbling. I know you have to keep your head down and grind. ... To me, in my mind the job is not mine. I still have to earn it. I try not to listen to that stuff at all."

NOTES: RHP Mike Soroka, attempting a comeback from his second torn right Achilles tendon, said he expects to have no restrictions at the start of spring training. He'll compete for the No. 5 spot in the rotation. ... OF Ronald Acuna Jr., who played through knee soreness last season following surgery in 2021, said through a translator: "I think I'm back to feeling normal and healthy, feeling 100%. I definitely don't want to play DH anymore."