Braves' run reminiscent of '93 -- but stakes are different 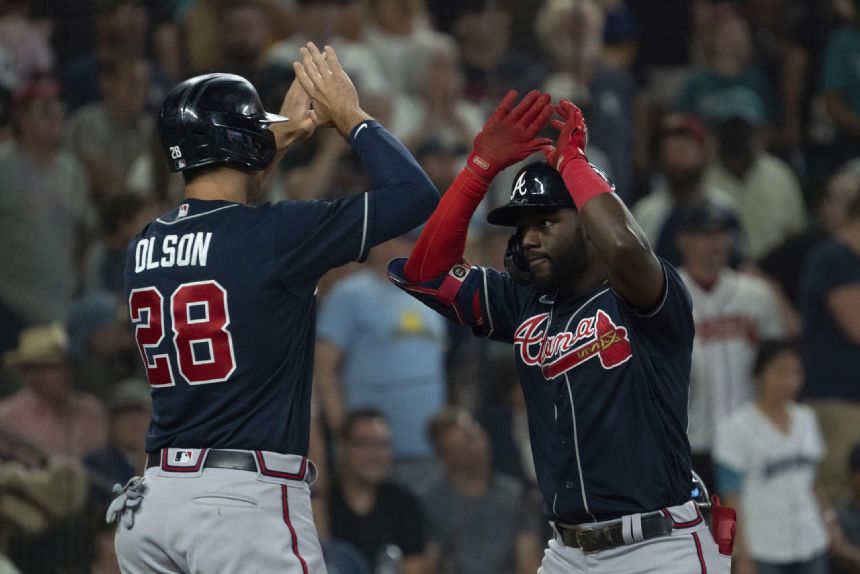 Atlanta finally passed the New York Mets - then the Braves ran into their mirror image from the American League.

That would be the Seattle Mariners, who took two of three from the Braves and are now 50-22 in their last 72 games. Atlanta has played at an even better clip, going 64-26 since the start of June. That helped the Braves erase a 10 1/2-game deficit in the NL East, even though the first-place Mets never played all that badly.

Atlanta moved a half-game ahead of New York when it won the opener of its series in Seattle on Friday night, but now the Braves trail by 1 1/2 games after a wild finish Sunday. Atlanta scored five runs in the top of the ninth to take a one-run lead, only for Julio Rodriguez and Eugenio Suarez to hit solo homers in the bottom half for an 8-7 Seattle victory.

The Mariners are closing in on their first postseason appearance since 2001. The Braves are trying to defend the World Series title they won last year. The race atop the NL East is starting to resemble another famous one involving Atlanta - from the NL West in 1993.

That was the final postseason before wild cards, so the Giants were left out of the playoffs entirely. The Mets and Braves don't have to worry about that this year, barring a massive collapse. But the winner in this NL East chase - in which both teams are on pace for at least 100 wins - would probably end up with a bye into the Division Series. That's no small thing.

THAT TIME OF YEAR

The Los Angeles Dodgers, who are an incredible 59-20 in their last 79 games, have already clinched a postseason berth. Their magic number to wrap up the NL West is down to three.

The next-lowest magic number to win a division belongs to Houston at 12 in the AL West. But as well as Seattle is playing, that could still take a little while.

In 1993, Atlanta and San Francisco had a combined four 20-game winners. Who were they?

LINE OF THE WEEK

There's a bit more separation in the American League wild card race now. Toronto saw to that by taking three of four at Baltimore. The Blue Jays now lead the Orioles by 5 1/2 games for the third wild card.

Toronto started that series with a doubleheader sweep Monday, and Bo Bichette homered three times in the second game. He had six hits and seven RBIs in the doubleheader.

COMEBACK OF THE WEEK

The St. Louis Cardinals scored five runs in the bottom of the ninth to beat Washington 6-5 on Wednesday night. The winning hit came with two out when Tommy Edman's drive to left field bounced off outfielder Alex Call's glove, allowing both runners on base to score.

It was the first time this season a team won after trailing by four or more runs entering the ninth. While the Nationals were batting in the top of the ninth, the St. Louis win probability dipped to 1.1%, according to Baseball Savant.

Honorable Mention: The Cardinals weren't done with big comebacks. On Sunday, they scored four in the ninth to erase a two-run deficit and went on to beat Pittsburgh 4-3. Albert Pujols put St. Louis ahead to stay with a two-run homer - the 697th of his career, moving him past Alex Rodriguez and into sole possession of fourth place on the career list.

On Tuesday night, Colorado came back from a 6-1 deficit and beat Milwaukee 10-7 in 10 innings.