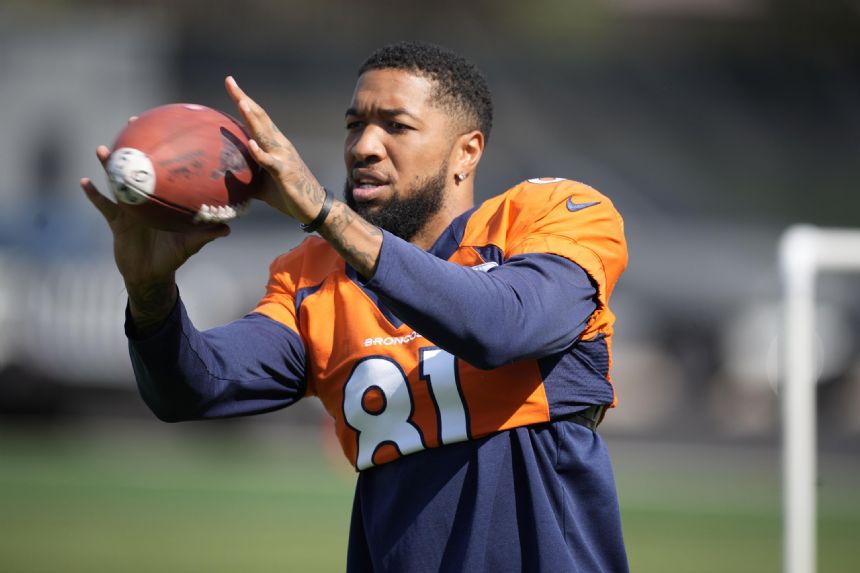 ENGLEWOOD, Colo. (AP) - Wide receiver Tim Patrick was carted off with a right knee injury after catching a pass from Russell Wilson at the Denver Broncos' training camp practice Tuesday.

Patrick made a leaping grab over cornerback Essang Bassey but his right knee buckled as he made his first move after the catch.

Patrick was taken for an MRI, as was second-year running back Damarea Crockett, who hobbled off with a knee injury earlier in practice. Coach Nathaniel Hackett didn't have any updates on their status after practice.

Patrick's teammates gathered around him when he fell to the grass, offering him encouragement as he was carted off the field.

"Tim is such an impactful person for this team, a leader, a vet," wide receiver Courtland Sutton said somberly. "He's the vet that you want to mold your young guys after."

Patrick signed a three-year, $34 million contract last year in the midst of his best NFL season when he caught 53 passes for 734 yards and five touchdowns.

He and Sutton together would give Wilson a pair of 6-foot-4 targets. Patrick's loss hovers as a big blow to the team's new quarterback and its first-year head coach as they build their offense.

"We can't replace a guy like that," safety Kareem Jackson said.

Patrick's injury is the latest blow to the team's nicked-up offense.

Tyrie Cleveland left Monday's practice after getting hit in the throat, Jerry Jeudy has dealt with a string of injuries over the last year, KJ Hamler is making his way back from hip and knee operations and rookie tight end Greg Dulcich has missed all of camp with a pulled hamstring.

Aside from Sutton, there's not a lot of experience in Denver's remaining wide receiving corps.

"All of those guys are going to have to rally together," Hackett said. "It's part of this game and it's the worst part of this game is when things like that happen. But it also has to bring your team together. We've got to find a way to fill that void."