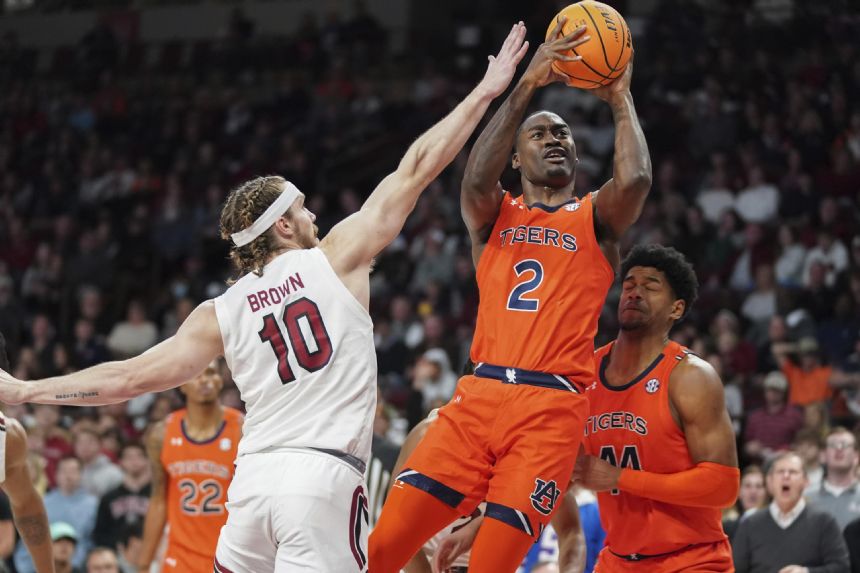 COLUMBIA, S.C. (AP) - Johni Broome had a season-high 27 points and 11 rebounds as No. 16 Auburn took control late in the opening half to run past struggling South Carolina 81-66 on Saturday.

He hit 12 of his 17 shots in 30 minutes for his sixth double-double this season and fifth against an SEC opponent.

Auburn got out in front early, but the Gamecocks (8-11, 1-5) were still in the game despite shooting less than 20% from the floor and not hitting a field goal for more than five minutes in the first half. That's when the Tigers closed the half with a 12-3 run and eventually led by as many as 26 points in the final 20 minutes.

The Gamecocks finished a three-game homestand with three double-digit losses, all after a stunning win over Kentucky at Rupp Arena on Jan. 10. South Carolina has not led any SEC home game at any point this season.

Wendell Green Jr. had 16 points and Jaylin Williams had 12 for Auburn.

Meechie Johnson was South Carolina's only other player in double figures with 11 points.

Auburn: The Tigers are hunting, having won five straight and about to head back home where they'll have a chance to extend the nation's longest active home winning streak. Auburn has won its last 28 games at Auburn Arena and took over the lead after Gonzaga lost at home to Loyola Marymount on Jan. 19 to end a 75-game home winning streak.

South Carolina: The Gamecocks are simply trying to be competent in their first season under coach Lamont Paris. A .500 record for the season would be considered very successful, considering he took over a team so bereft of talent that even adding an NBA prospect in Jackson wasn't going to offer much help.