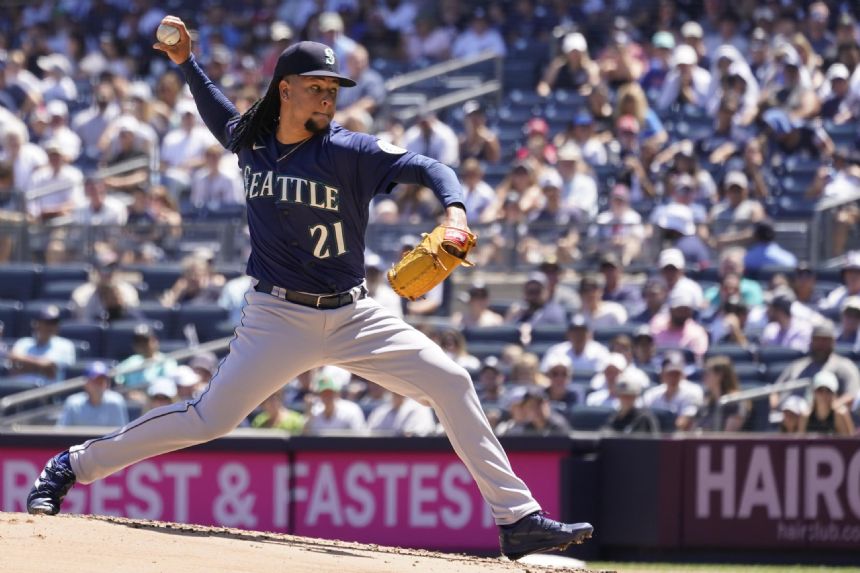 NEW YORK (AP) - Luis Castillo pitched five-hit ball into the seventh inning in his Seattle debut, and the Mariners used a fast start to beat Gerrit Cole and the New York Yankees 7-3 on Wednesday.

Castillo (5-4) struck out eight in 6 2/3 innings in his second start in the Bronx in less than a month. The right-hander allowed three runs and walked three.

The 29-year-old Castillo was acquired by Seattle in a trade with Cincinnati on Friday night for four prospects.

Kyle Higashioka hit a two-run homer for the Yankees.

The Phillies looked to be down to their final three outs when J.T. Realmuto grounded into what was ruled an inning-ending double play with the Braves nursing a 1-0 lead.

But Philadelphia challenged the call, and the replay showed Realmuto's foot getting to the bag ahead of the relay throw while Rhys Hoskins trotted home from third.

With the game now tied at 1, Collin McHugh (2-2) fell behind 2-0 in the count before grooving one to Castellanos, who connected for his ninth homer.

Zack Wheeler (10-5) pitched seven innings for the win. David Robertson, acquired Tuesday in a trade with the Chicago Cubs, worked a scoreless ninth for his first Philadelphia save.

Orlando Arcia homered for Atlanta, which had won four straight.

Siri led off the Tampa Bay sixth with a single off Adam Cimber (8-4). He stole second and scored on Peralta's tiebreaking single.

Peralta had two of Tampa Bay's six hits, all singles, after they managed just two hits in Tuesday night's 3-1 loss.

Peralta was acquired in a trade with Arizona on Saturday, and Siri came over from Houston in a three-way trade on Monday.

Ryan Thompson (3-2) got the win after pitching two hitless innings. Jason Adam worked the ninth for his fifth save in six attempts.

Teoscar Hernandez drove in Toronto's runs with a first-inning double and his 15th homer in the fourth.

MINNEAPOLIS (AP) - Jorge Lopez got his first save with his new team and newcomer Sandy Leon drove in two runs, leading Minnesota to the win.

Carlos Correa and Gio Urshela each drove in a run for the AL Central leaders. Joe Ryan (8-4) pitched five innings of one-run ball, bouncing back nicely after a rough outing at San Diego.

Lopez, an All-Star acquired Tuesday from Baltimore, earned his 20th save of the season with a 1-2-3 ninth inning.

Rosario's 450-foot drive to dead center was the longest of the season at Progressive Field.

Shane Bieber (6-6) struck out eight over six innings in his 100th career start, extending his winning streak in interleague games to eight.

The Guardians remained one game behind AL Central-leading Minnesota.

Alek Thomas and Geraldo Perdomo homered for the Diamondbacks.