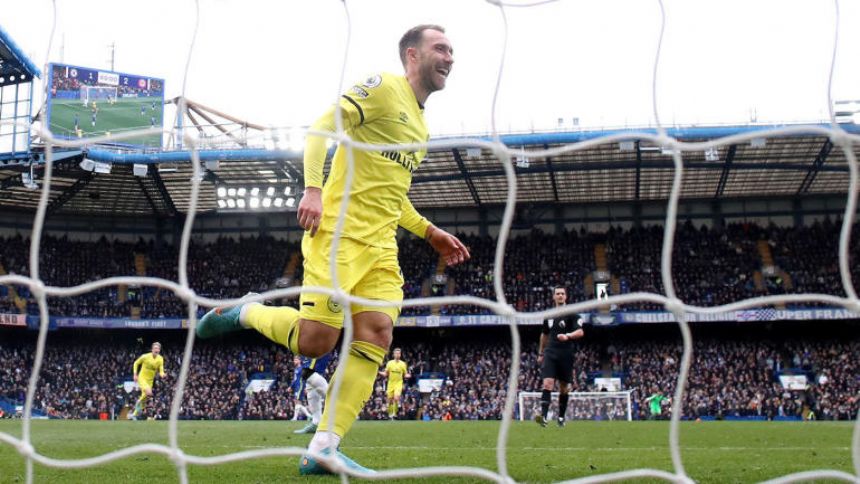 It's a glorious day for the Bees and Christian Eriksen as they've seen off Chelsea by a remarkable 4-1 score. Eriksen is fully back in the thick of things after recovery from the heart attack he had on the field for Denmark at Euro 2020. Scoring in three straight for club and country, Eriksen has clawed Brentford back from the fringes of the relegation battle and now dealt Chelsea an embarassing blow.

Eriksen made his first appearance for the Bees on February 26th. Since then, they've been a top-half side again collecting nine points in six matches. Defeating Norwich, Burnley, and Chelsea is just what they needed to put daylight between them and a fight for relegation. Eriksen has been at the center of everything.

Eriksen's first goal for the Bees was a special one, and came at the end of a furious bit of action where the ball found its way into the back of the net three times.

Brentford lead 2-1. There have been THREE Goals in the past 8 minutes!
??: @USA_Network #MyPLMorning | #CHEBRE pic.twitter.com/yzvrBYHquj

Chelsea struggled to make anything happen during the first half but started off the second period in a big way with an Antonio Rudiger belter from outside the box that David Raya had no chance on. With an xG of .02 on the goal, he shouldn't have had a chance either but sometimes it pays to be adventurous.

Brentford took that goal personally as they bounced back quickly as Bryan Mbeumo assisted both Vitaly Janelt and Eriksen scoring goals within four minutes to put them ahead 2-1. Thomas Tuchel made an immediate change hooking Marcos Alonso for Reece James returning after his recovery from injury but it wouldn't help.

Janelt completed his brace in the 60th minute, this time scoring with thanks to an assist from Ivan Toney. Chelsea did all they could to change the tide with N'Golo Kante and Timo Werner being taken out for Romelu Lukaku and Mateo Kovacic but it wouldn't be enough. James thought that he created a goal from a free kick but it was disallowed due to a hand ball from Kai Havertz in the box.

Yoane Wissa came into the match in the 85th minute and, at this point, teams should be scared of him entering as only a minute later he put Brentford up 4-1. This was the third goal from the bench for Wissa during this season as he has been Thomas Frank's sparkplug all year long.

It was a fully deserved victory for the bees in an open game where they took 17 shots despite Chelsea dominating possession. The Blues mustered an xG of 1.64 to Brentford's 2.30. This loss will also means that even if Chelsea remain perfect Arsenal have the ability to catch them for third thanks to a looming date at Stamford Bridge on April 20th. There will be a lot to play for as the teams are only separated by five points in the table with Arsenal having a match in hand.