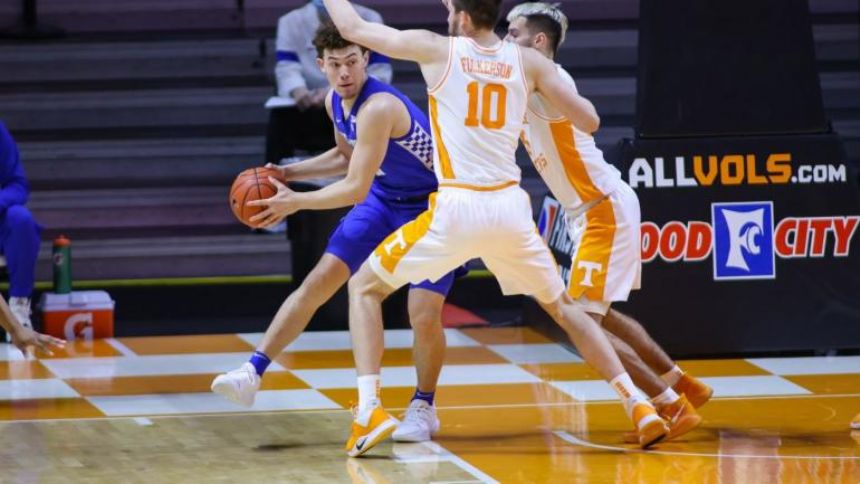 With the College Football Playoff wrapped up, college basketball now has center stage in the college sports universe, and Saturday's slate brings a solid marathon of action on the hardwood. The early afternoon window will be particularly loaded as No. 18 Kentucky hosts No. 22 Tennessee and No. 15 Iowa State hosts No. 21 Texas in a pair of critical early-season conference battles.

It will be past midnight ET when the last ranked team is done as No. 3 UCLA and No. 5 USC start league contests at 10:30 and 11 p.m. ET, respectively. In between, there will be plenty of action, including a bounce-back opportunity for No. 1 Baylor as the Bears look to recover from their first loss by hosting Oklahoma State at 5 p.m.

Another of the day's appealing Big 12 contests pits No. 9 Kansas against West Virginia in a battle of teams with identical 13-2 (2-1 Big 12) records. That one will be broadcast live on AP and is among the big games that our experts have picked below.

Here is the full breakdown of the day's biggest tilts from the AP Sports squad.

1 p.m.| ESPN, fuboTV(Try for free) -- Having primary point guard Sahvir Wheeler available would be nice for Kentucky against a Tennessee defense ranked No. 2 nationally by KenPom.com. But even if he remains absent due to the lingering effects of a Jan. 4 neck injury, the Wildcats have proven they can function. Freshman phenom TyTy Washington set a program record with 17 assists last Saturday against Georgia and can guide a surging UK offense to a relatively comfortable victory here. Prediction: Kentucky 75, Tennessee 65

West Virginia at No. 9 Kansas

2 p.m.| AP,APSports.com,AP Sports App(Free) -- Kansas struggled a week ago against Texas Tech's tenacious defense and now faces a similar challenge going up against a great West Virginia defense. With point guard Remy Martin still day-to-day because of a knee injury, the Jayhawks may have trouble getting into an offensive rhythm. This is by far WVU's toughest test so far this season, so it would be a surprise if the Mountaineers go on the road and win outright. But if Taz Sherman can keep pace with Ochai Agbaji, they should keep the game close and have a chance at the end. Prediction: Kansas 68, West Virginia 65

2 p.m.| ABC, fuboTV(Try for free) -- After dropping five straight, including losses against Richmond and Wright State, NC State has now won two of its last three after crushing Louisville 79-63 on the road Wednesday. The Wolfpack are a guard-oriented squad capable of scoring in bunches, which makes them similar to the Miami team that upset Duke last Saturday. If the Blue Devils haven't shored some things up defensively, they could end up in another battle. Prediction: Duke 78, NC State 70

2 p.m.| ESPN+ -- The Cyclones are off to a 1-3 start in the Big 12 but gave No. 1 Baylor and No. 9 Kansas all they could handle. Now comes another huge test as Texas comes to town looking to build off a defensively dominant 66-52 win over Oklahoma on Tuesday. Both teams allow fewer than 60 points on average, and Texas gives up just 53 per game, which is first nationally. Hilton Coliseum should be enough to give ISU a slight edge in a low-scoring brawl. Prediction: Iowa State 60, Texas 59

Oklahoma State at No. 1 Baylor

5 p.m.| ESPN, fuboTV(Try for free) -- Baylor should be amply motivated after suffering its first loss of the season at home against Texas Tech on Tuesday. The Cowboys pose a similar type of challenge as a gritty, defense-oriented squad. OSU actually forces more turnovers and blocks more shots than Texas Tech. But offense has been a struggle for the Cowboys, and their guards aren't quite as physical as Texas Tech's. Baylor should be able to stifle Oklahoma State and get back in the win column without too much drama. Prediction: Baylor: 77, Oklahoma State 68

No. 4 Auburn at Ole Miss

8:30 p.m.| SEC Network, fuboTV(Try for free) -- With No. 1 Baylor suffering its first loss this week, Auburn could have a case to be the nation's new top-ranked team if it can take care of business here. The Tigers are already No. 1 in Gary Parrish's Top 25 And 1 and have been wildly impressive during a 12-game winning streak. In theory, they should crush an Ole Miss team that just lost by 16 at Texas A&M. But the Rebels soundly beat a decent Mississippi State team at home just a week ago and should keep this one closer than many expect. Prediction: Auburn 75, Ole Miss 70