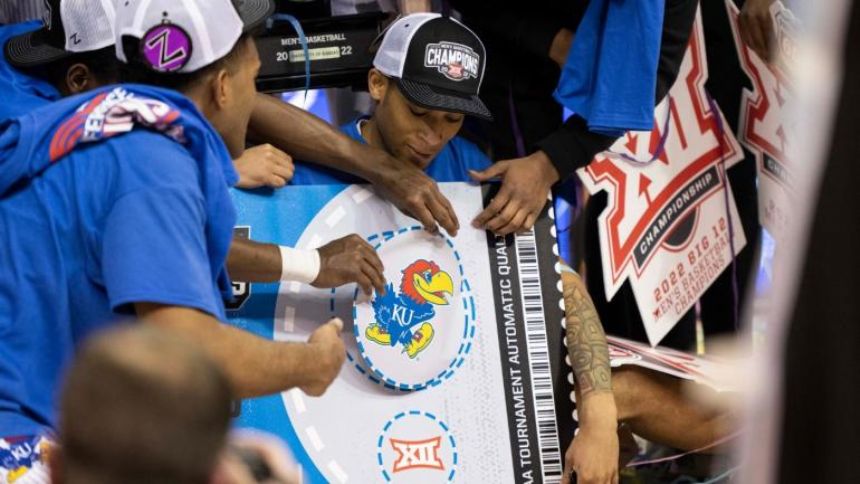 Unlike in the 2020-21 season, when reasonable minds could disagree over which conference closed the campaign as the best in college basketball, there should be little debate over the matter following the 2021-22 season. Not only did the Big 12 produce its second straight national champion in Kansas, but the league was consistently excellent throughout the season.

Aside from the No. 1 seed and title-winning Jayhawks, the conference produced a second No. 1 seed in Baylor and saw Texas Tech and Iowa State both reach the Sweet 16. While KU was the only Big 12 team to go beyond the Sweet 16, the overall NCAA Tournament performance of the Big 12 stood out since each of the league's six teams in the Big Dance won at least one game.

Though the league had seven teams in the 2021 NCAA Tournament, the Big 12 was arguably deeper in 2022 as last season's bottom-feeders bounced back to create a top-to-bottom competitiveness that made for compelling theater throughout the season. Unlike in 2021 when Iowa State and Kansas State dragged down the league's average NET ranking by finishing at 224 and 176, respectively, there were no serious slackers from the conference. All 10 teams from the conference finished in the top 75 of the NET.

Elsewhere around the country, the Pac-12 suffered a serious backslide after it burst onto the scene with a memorable 2021 NCAA Tournament. While the ACC salvaged its reputation by comprising three of the Elite Eight in the NCAA Tournament, it was still a down season by the standards of a historically proud basketball conference.

Draft prospects were taken from the latest'AP Sports NBA Big Board, which features the top 75 prospects for the 2022'NBA Draft. Here is

Each of the 10 teams in the Big 12 were in the NCAA Tournament conversation, at minimum, during parts of league play. Even Kansas State and West Virginia, which each finished below .500, proved the ability to compete with and beat quality opponents. Every night in the Big 12 was a fight, and the fact that the conference's six NCAA Tournament teams all won at least one game in the Big Dance proves how well-prepared they were after the conference gauntlet. With Kansas hoisting the national championship trophy in the end, there is little doubt the Big 12 takes the title as the nation's top conference for the second year in a row..

The Big Ten slipped a bit off the pace it set during the 2020-21 season, when it had four teams finish in the top 10 of the final AP poll. Just one team - Purdue - finished in that realm this season, and the Boilermakers were No. 10. Only two of the league's nine NCAA Tournament teams reached the Sweet 16, and both were eliminated in that round as the Big Ten's national title drought stretched to 22 years. In the end, though, the league's sheer volume of NCAA Tournament teams and professional prospects helps it stand out as college basketball's second-best conference.

With Auburn, Kentucky and Tennessee eliminated each eliminated by double-digit seeds on the first weekend of the NCAA Tournament, the SEC once again needed Arkansas to help it save face. The Razorbacks were the only SEC team to reach the Sweet 16 as they reached the Elite Eight for a second straight season. It was by no means a banner year for the conference, but the SEC's regular-season bona fides and top-level talent give it a slight leg up on the ACC and Big East in the final rankings.

The Big East rises two spots in this year's ranking after sending six teams dancing and seeing Villanova reach the Final Four. The ineptitude of the league's bottom-dwellers - we're looking at you Georgetown - was an issue, but the Big East's upper-echelon provided high-quality, entertaining basketball all season. Providence's emergence as a national player and Marquette's return to relevance in Shaka Smart's first season as coach helped the Big East to a fine season.

The ACC's excellent NCAA Tournament performance, highlighted by a historic Final Four showdown between Duke and North Carolina, gave it a case to be higher than No. 5 in this season's ranking. But in the end, a rough regular season was too much for the conference to overcome. After sending nine teams to the Big Dance in 2017 and 2018, the ACC produced just seven in 2019 and 2021. That number was down to five this year as Duke spent much of the season as the league's only ranked team.

At a time when many programs around the country returned oodles of veteran talent due to the extra season of eligibility allowed by the NCAA amid the COVID-19 pandemic, the Pac-12 found itself replacing a surprising amount of talent this season. Every team in the conference except UCLA lost its leading scorer, and that exodus of production was evident as the league failed to build off its exceptional performance in the 2021 NCAA Tournament. Of the three teams who reached this year's Big Dance, No. 1 seed Arizona and No. 4 seed UCLA were bounced in the Sweet 16 and No. 7 seed USC lost in the first round. There is no way around the fact that it was a top-heavy and disappointing season for the Pac-12.

Houston continued to carry the AAC's banner as the Cougars reached the Elite Eight following a Final Four run in 2021. The NCAA Tournament success for coach Kelvin Sampson's squad came after it won the AAC regular season and conference tournament titles. The AAC did see marginal improvement in its average NET ranking and had a second team, Memphis, win a game in the NCAA Tournament. But on the whole, the league continues to underperform relative to what was expected when UConn and Louisville were among the founding members for the 2013-14 season.