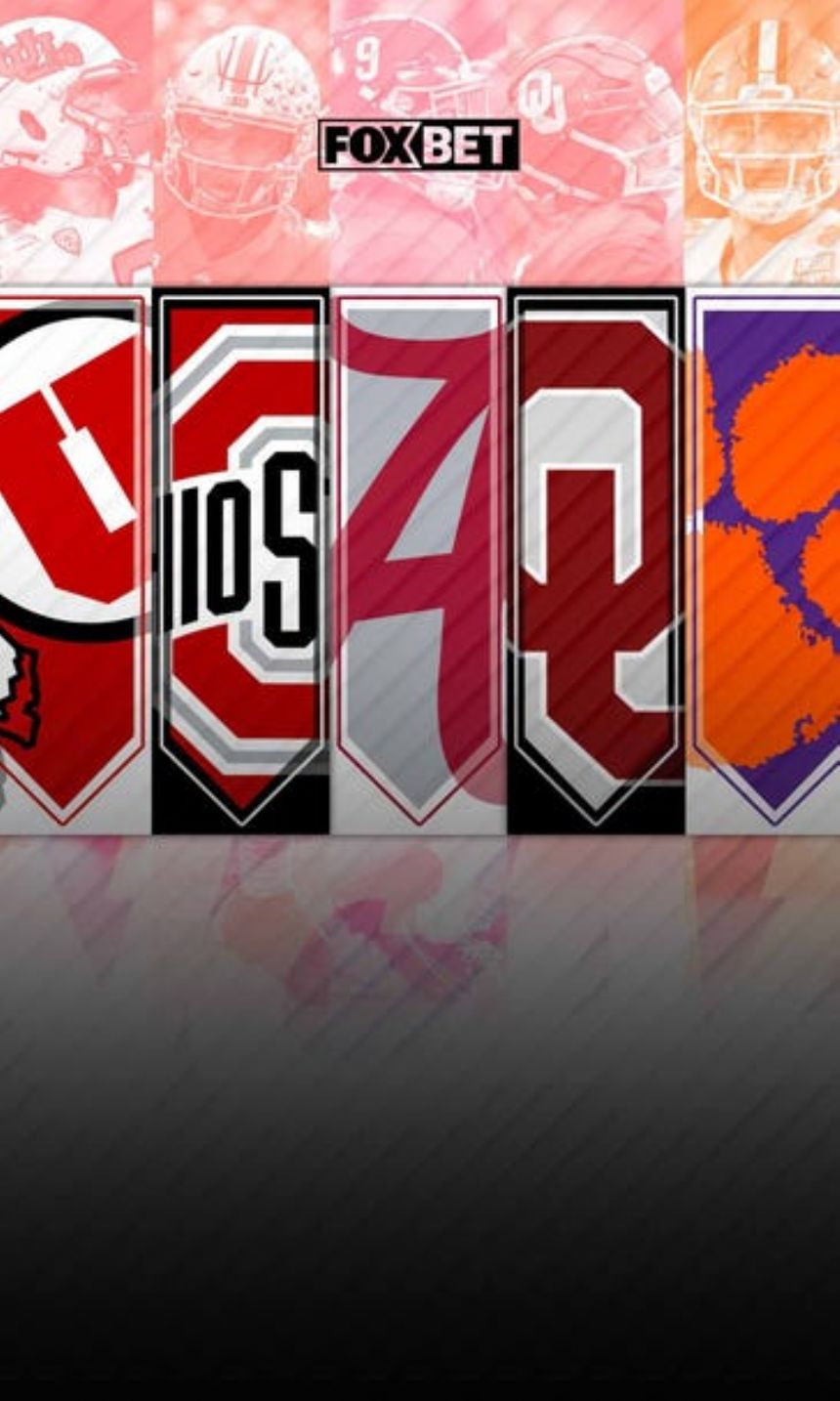 The dog days of summer are quickly coming to an end, and bettors are excited about getting the chance to cash in on some college football action.'

And when it comes to the College Football Playoff (CFP), other than last year's outlier Cincinnati team, the four-team tournament has been dominated by blue blood, Power 5 programs. Essentially, all roads to the natty go through the SEC, Big Ten, ACC, Pac-12 or Big 12. And if we're being brutally honest, the path to the title really goes through the SEC.

Ahead of the season, fans and gamblers speculate about which team will come out on top of each conference. Between the NFL Draft, the transfer portal and unfortunate injuries, no team's roster look identical from one year to the next. So deciding where to budget your bucks on conference winners can be challenging. That's where our very own AP Sports analyst Geoff Schwartz steps in to save the day.

Geoff - former Oregon Duck and NFL lineman - breaks down his best bets to win every Power 5 conference. Will the national champion Georgia Bulldogs avenge last season's loss in the SEC Championship game, or will Nick Saban coach his Tide to the conference title again? Can Clemson have a rebound year in the ACC while Michigan tries to go back-to-back in the Big Ten?

Let's dive into where our expert thinks you should place your conference championship wagers ahead of this exciting college football season, with all odds via AP Bet.

This one is simple. Take Alabama or Georgia, and you can hedge with the other side when they meet in the SEC championship game. But for my best conference bet, I'm rolling with the Tide here.'

Alabama returns a roster that is 89% blue chip players - roughly nine out of 10 players were either a four- or five-star recruit. Plain and simple, the Crimson Tide are the most loaded squad in the country. Yes, they lost multiple players to the NFL Draft as usual, but they return Heisman-winning quarterback Bryce Young and the best player in the sport at defensive end, Will Anderson.'

So I'll take the most talented roster in the country with the opportunity to hedge in the title game.

The Big Ten is sticking to the old script and letting whichever teams win their respective divisions advance to the Big Ten Championship Game. Basically, this means that Ohio State will win the game and the conference.'

Ohio State plays in the tougher Big Ten East Division with Michigan, Michigan State and Penn State. After the Buckeyes finish running through that division, the Championship Game in Indianapolis will be a cakewalk. Why is that? Well, the Buckeyes will be facing a team from the Big Ten West that probably won't be able to score more than 21 points a game. OSU has one of the best offenses in the country, so if the Buckeyes stay healthy, the Big Ten Title Game will be a blowout.

Sorry, Iowa and Wisconsin fans, but y'all just aren't beating "The" Ohio State.

The most talented teams usually take the conference every year, so those are the teams I'm picking to win - the most stacked, most talented squads. Notice I said usually and not always. The way the ACC unfolded last season is one reason I must choose my words carefully.'

Let's look at Clemson. They had an insanely talented roster last season and even won 10 games. But those wins still fell short of the lofty expectations, and Pittsburgh won the ACC. Pittsburgh! That won't happen again this year.

The reason behind that Panther surprise was that the Tigers had a dreadful offense last season. They finished 71st in the country in efficiency and 114th in explosive play rate.'Quarterback DJ Uiagalelei, a top recruit, struggled during his first season as the Clemson starter. He only completed 55% of his passes with nine touchdowns and 10 interceptions. Clemson has a new offensive coordinator who will need to light a fire into this offense. The talent at skill positions is there and a slight improvement to the playbook will have the unit good enough to win the conference. '

Clemson's defense will play a huge part in the Tigers claiming the ACC crown this season. While they lost long-time DC Brent Venables to Oklahoma, this unit returns monsters at all three levels. Clemson did lose three secondary pieces, but again, the Tigers replaced those guys with blue-chip recruits.

I'm picking Clemson for these reasons, but I'm also mindful of the talent around the conference. If Clemson's offense improves, is there a team that could take the Atlantic Division title or beat the Tigers in the ACC Championship game? Wake Forest has defensive concerns, Florida State has concerns all the way around and NC State is always just good enough but not great. Clemson will likely face Miami in the ACC Championship game, and the Hurricanes are still at least a year away from having the talent needed to compete against Clemson.

I would love to homer this pick and take my Ducks, but I think the Utes right now are in a slightly better spot because they know exactly what they've got in quarterback Cam Rising. Cam is the best QB in the conference entering this season, and he has the most productive running back returning to his backfield. The Utes do have to replace two linemen, but they return the best tight end group in the conference. On defense, they are talented both on the line and in the secondary. Overall, Utah is always well-coached, consistently has excellent special teams and rarely loses at home.'

Oregon, on the other hand, has a more talented overall roster. The Ducks' defense is special, and they've got some spectacular weapons playing offensive skill positions. But they have a new coach in Dan Lanning, and they've got a first-time play caller in Kenny Dillingham. I'm high on the coaching ability of this staff, but I need to see them in action before I pick them to win the conference. Plus, I'm slightly worried about quarterback transfer Bo Nix being able to clean up the turnover problems.

So I'm putting my allegiance to my alma mater aside and taking Utah to win the conference in back-to-back years.

Maybe I'm old-fashioned, but I'll continue to ride with the most talented and best-coached team in the conference.'

Oklahoma won the Big 12 for six years in a row before losing the crown to Baylor last season. Yes, the Sooners went through some changes after that painful loss; former head coach Lincoln Riley bolted to USC and brought the starting quarterback (Caleb Williams) and the best receiver (Mario Williams) along with him.'

Oklahoma replaced Riley with long-time Clemson defensive coordinator Brent Venables, giving the career assistant his first opportunity'to be a head coach. The Sooners also snagged Dillion Gabriel from UCF to quarterback an offense that's led by new offensive play-caller Jeff Lebby. Lebby is a former Sooner who crafted explosive offensives at Baylor, UCF and most recently, Ole Miss. OU has an outstanding offensive line coach, and the squad has weapons all around Gabriel. This Sooner offense will be just fine without Lincoln Riley.'

Despite all of the winning from Riley at Oklahoma, his defense held him back from winning playoff games. That will not be an issue anymore. Venables brings his aggressive defensive tactics from Clemson, where the Tigers had one of college football's best defenses for years. While the existing personnel isn't quite what Venables is used to - Riley recruited smaller, quicker defensive players - I still expect this defense to be the best it has been in a decade.'

The Sooners currently have the conference's most talented roster, the motivation to show they do not need Lincoln Riley to win and they will be much improved on defense.'

I have to give the edge to the Sooners to win the Big 12.