College Football Playoff dark horse contenders: One team from each Power Five conference to watch in 2022 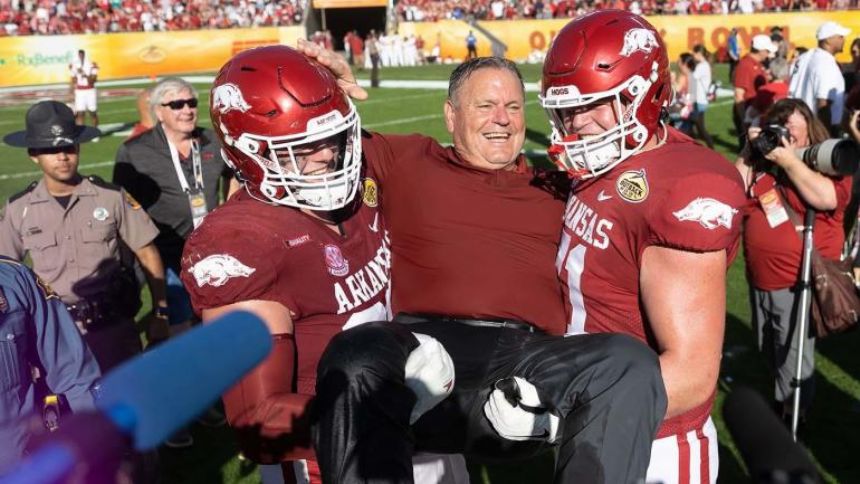 When spring practice broke in 2021, there would be no way to guess that Michigan and Cincinnati would be in the College Football Playoff field with'Clemson and Oklahoma'sitting at home. College football always hands us the unexpected, but it's never too early to call our shots with dark horse contenders for this season's CFP.'

To limit our scope of "dark horse" teams, we're excluding the 14 teams with 50-1 or better odds including Alabama, Notre Dame, Utah and a number of other options. Don't worry, that still leaves more than 50 teams jockeying for position.'

Here are teams from each Power Five conference that fit our dark horse criteria that could shock the world and make the field.'

The Wolf Pack have hovered right on the edge of good and great for effectively the last decade. Dave Doeren's squad has won between seven and nine games all but one season since 2014, including a 9-3 year in 2021 that could have led to more if not for the bowl game being canceled.'

Now, North Carolina State is the only postseason top 15 squad to rank top-15 in returning production. Specifically, the Wolf Pack rank No. 5 in defensive returning production, but potential All-ACC quarterback Devin Leary will ensure that the offense keeps moving.'

NC State was right on the edge of competing for the conference championship in 2021 but came just short. Circle a matchup on the road against Clemson on Sept. 30 - it could decide the ACC Atlantic.'

Penn State is a quarterback away, again. Unlike last season, the Nittany Lions have more than one serviceable signal-caller in the room to raise the floor.'

Sean Clifford is back for another opportunity to rewrite the Penn State record books after an injury-plagued season. However, all eyes will be on freshman Drew Allar, the No. 1 quarterback and No. 3 overall prospect in the'Top247 rankings. Additionally, backup Christian Veilleux has shown some encouraging signs.'

Penn State has built a consistent defensive reputation and should be able to keep it going after losing two star defenders in the second round of the draft. However, the deep roster of options at quarterback could be what Penn State finally needs to enter the playoff mix.'

The Bears are defending Big 12 champions, but their 60-1 odds still push them outside of the top 15 of national championship odds. Despite losing six players to the NFL Draft, Baylor still has an intriguing shot to make its first College Football Playoff.'

Baylor boasts the Big 12's best trenches on both sides of the ball with four offensive linemen and every defensive lineman back. The Bears also added intriguing interior lineman Jaxon Player from Tulsa to bolster the unit next to future NFL Draft pick Siaki Ika at nose tackle.'

The big question about Baylor taking the step comes at quarterback. The Bears elevated sophomore Blake Shapen to the starting job after Gerry Bohanon led the most successful team in program history. While Bohanon was solid, Shapen brings a new level of upside that could prove useful with Oklahoma and BYU on the schedule.'

The three teams with real playoff chances all rank within 50-1 odds, so heading to the Pac-12 forced us to get creative. Ultimately, it took us back six years to find one of two programs in the conference with a playoff appearance to its name.'

Washington was 4-8 last season, but the off-field disaster surrounding Jimmy Lake's tenure masked what has consistently been one of college football's most consistent programs. The offense was notably bad, but new coach Kalen DeBoer has produced dynamic units everywhere he has coached. If the defense doesn't drop off much, there's two-way potential.'

The Huskies ranked No. 17 nationally in talent composite in 2021, right in the range of Michigan, Penn State and Florida State. DeBoer added a top 25 national transfer class, including Indiana quarterback Michael Penix and four skill position players. The ingredients for a turnaround are heading to Seattle.'

Obviously, finding a dark horse in the SEC takes a little extra legwork with so many easy contenders in the field. If there's one team ready to ruin some Saturdays in the fall, Sam Pittman's Hogs are that team.'

The Razorbacks built on a strong debut with a 9-4 campaign and victory over Penn State in the Outback Bowl. Arkansas won five of its last six games down the stretch, and only lost to then-No. 2 Alabama by seven points.'

A few key parts are off to the NFL, but quarterback KJ Jefferson should only keep growing behind an offensive line that should always be excellent. The Razorbacks get Cincinnati, South Carolina and Texas A&M in the first four weeks of the season leading into Alabama. We'll know what to expect quickly.'

On Saturday, Rich Strike pulled off the biggest upset in the since 1913. Upsets make sports great, so we decided to pull together a few more underdog betting options that either match or exceed Rich Strike's 80-1 odds to win it all.'

Kentucky (125-1): Hey Will Levis, want to live up to Chris Trapasso's way-too-early 2023 mock draft slotting you as the No. 1 pick? I've got just the thing. Kentucky won 10 games last year for the second time and returning star running back Chris Rodriguez next to Levis. With an always-excellent defense on the other side and a manageable schedule leading up to a showdown with Georgia on Nov. 18, why not the 'Cats?'

BYU (200-1): Rating BYU below North Carolina, Iowa State and UCLA feels insane, but I'm no oddsmaker. The Cougars have an impressive schedule with Baylor, Oregon, Notre Dame and Arkansas on the docket. BYU also returns a number of stars from a fantastic team, including quarterback Jaren Hall and receiver Puka Nacua. The perfect mix of talent and opportunity is there, especially in what could be a tumultuous 2022 season.'

Houston (300-1): Like BYU, these Cougars technically don't land on our list for being a Group of Five program. But with Cincinnati graduating nine NFL players, Houston might be the new smart bet to make the College Football Playoff field from the AAC. UH went 12-2 with a win over Auburn in the Birmingham Bowl, and returns star quarterback Clayton Tune and receiver Nathaniel Dell. With UTSA and Texas Tech on the nonconference slate, there'll be manageable opportunities to create momentum.'