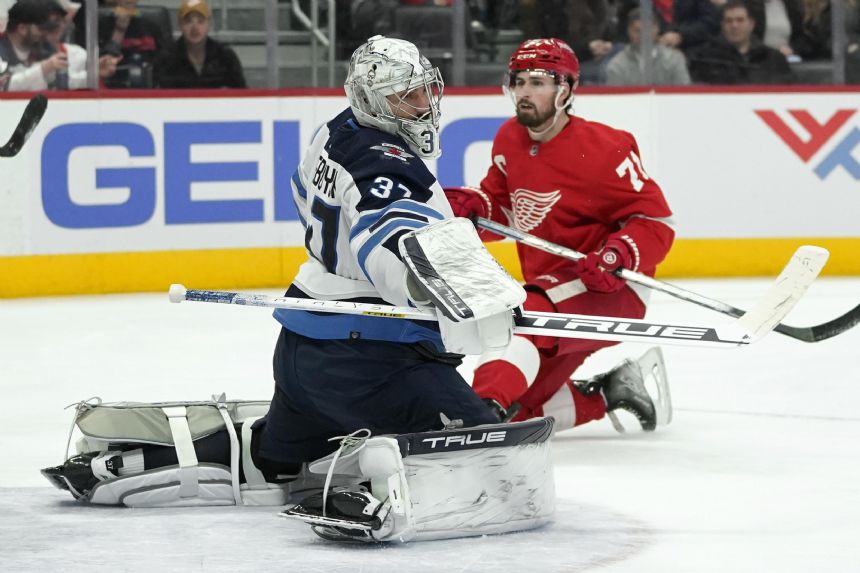 DETROIT (AP) - Connor Hellebuyck made 33 saves for his second shutout of the season and Andrew Copp scored twice in the Winnipeg Jets' 3-0 victory over the Detroit Red Wings on Thursday night.

Kyle Connor added an empty-net goal in Winnipeg's first game since a 7-1 loss in Colorado a week ago and just its fourth since Dec. 19. The Jets, who dressed six players on emergency recall, had seven postponements during that stretch.

Alex Nedeljkovic stopped 29 shots for Detroit. The Red Wings were shut out for the fifth time this season.

Copp opened the scoring at 5:41 of the first period. He flicked a shot near the left boards that deflected off defenseman Nick Leddy and caromed behind Nedeljkovic. Defenseman Dylan Samberg, making his NHL debut, was credited with an assist.

Copp's second goal and 10th of the season came just after Winnipeg killed off a penalty. He lifted a shot over Nedeljkovic's right shoulder midway through the second period.

The Red Wings had a 5-on-3 advantage for 47 seconds late in the third period and emptied the net for an extra skater. They still couldn't get the puck past Hellebuyck. Connor fired the puck from his own zone just before the second penalty for his 20th goal of the season.

The Jets are 12-0 when leading after two periods. ... Paul Stastny, Brenden Dillon and Eric Comrie joined on Thursday a handful of other Jets players in COVID protocol. ... Declan Chisholm made his NHL debut for Winnipeg. ... The Red Wings placed center Carter Rowney on injured reserve, retroactive to Jan. 4. ... Detroit's Dylan Larkin and Winnipeg's Connor were selected to play in the All-Star Weekend. ... The teams will meet in Winnipeg on April 6.

Jets: At Washington on Tuesday night.