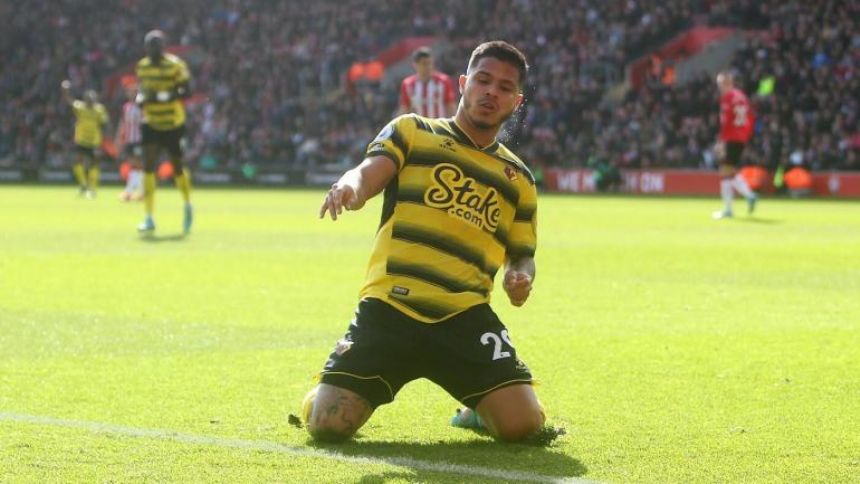 The Columbus Crew's attack could be getting a lift with the impending arrival of Juan "Cucho" Hernandez on a club-record deal. According to various reports, the Crew are close to adding Hernadez after Watford's relegation from the Premier League.'

The current record transfer for the club is held by Lucas Zelarayan, who moved from Tigres for $8 million. It's a move that has worked out so far for the Crew after 20 goals and six primary assists, while also winning MLS Cup and the Campeones Cup.'

While the Crew haven't confirmed the move yet, they did release a cryptic tweet pointing to something happening.'

Hernandez is a 23-year-old Colombian forward, and that would make the video make sense considering the country's production of coffee.'

In 25 Premier League matches, he scored five goals and assisted two more playing as a right winger mainly, while also appearing as a center forward or popping up on the left. While those numbers may not jump off the page, considering that Watford only scored 34 goals all season, which was the second-worst number in the Premier League, being involved in seven goals isn't bad at all.

Since moving Gyasi Zardes to the Colorado Rapids in April, there was speculation as to what the Crew would do to fill their void at forward now that they had an open designated player spot. Mauro Manotas was a name that came up, but Hernandez was their top target over the former Houston Dynamo striker. With the club in 11th place out of 14 in the Eastern Conference, landing him could get them into the playoff push.

Why are the Crew chasing Hernandez?

To begin, we have to head down a rabbit hole of underperforming forwards. This season, the top scorer on the Crew is Zelarayan, which is expected, but due to injuries, he hasn't logged 900 minutes yet this season. Miguel Berry, who gave the Crew the confidence to move Zardes, has only scored two goals, assisting none. It left quite a void atop the formation for Caleb Porter's men that hurt the attack as a whole. Derrick Etienne has been highly effective with three goals and five assists from the wing, but he and Zelarayan can't do it alone.'

Hernandez would be able to step in taking set plays when Zelerayan isn't available and offer an aerial target as he won about three headers per 90 minutes played in the Premier League. Offering a high work rate and above-average finishing, Hernandez can help the Crew attack push the pace and create quite a dangerous attack to go around. While he'd primarily play as a striker, the ability to play every position in an attacking three is also valuable for Porter as it allows him to mix and match his lineups.

Why would Hernandez want the move?

around the world as they're able to come to America, and if they perform well, get a bigger move elsewhere. For Hernandez, if he wants to prove that he can play as a striker and not a winger, MLS is the perfect place for him to do it as leading the Crew to the playoffs with a 15-goal season or better would surely see him move back abroad.

If things don't work out that way, MLS is still a great destination with good play, dedicated fans, and top-notch facilities, which is why you're seeing more and more Europe-based players make the move stateside. While the move likely means that teams in Europe didn't want to meet Watford's asking price, it also could see Hernandez come to the Crew with a chip on his shoulder to try and move back. That would be a win-win for both parties.

Being a summer signing is hard as there is immediate pressure to come in and help the team perform. The Crew have struggled this season as they are currently three points below the playoff line but would need to pass four teams to get there. The good news is, while they have struggled, the defense has been pretty good allowing only 17 goals across 14 matches. There is plenty of room for improvement in an attack that has been one of the worst in MLS, hence the need for Hernandez, but with Darlington Nagbe, Zelerayan, and Etienne, the core is there so Hernandez won't need to do everything.

Assuming the move happens, he could begin training with the team and have a bit of time to get settled before the summer transfer window opens on July 7th. This would see him potentially debut on July 9th away against the Chicago Fire. The two to three weeks of training could be all that he needs to hit the ground running for the remaining 20 games of the season. I'd mark being involved in ten goals as a success for him, assuming he's available for every match, but something along the lines of a goal contribution every other game would be quite a boon. It would also likely see the Crew make the playoffs, which is quite a success in year one.