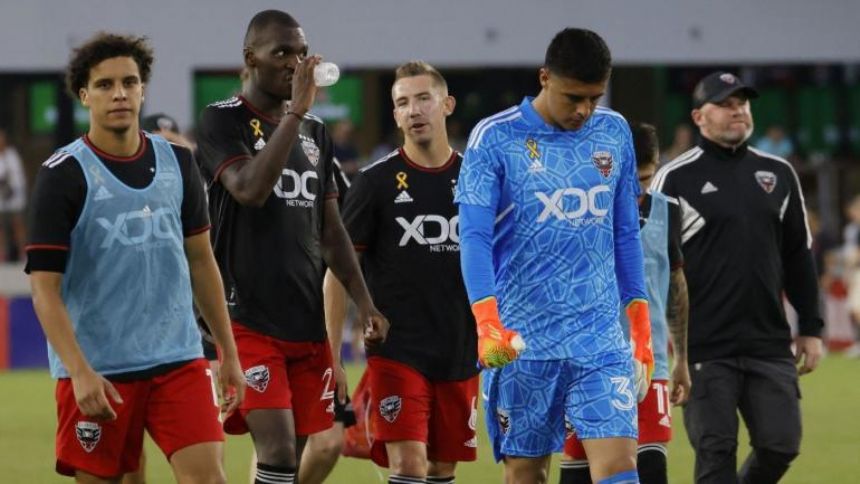 Inter Miami got above the playoff line with a 3-2 victory over D.C. United on Suday thanks to a brace from Leonardo Campana. It should've been a victory worth celebrating but for Phil Neville and the team, but it was overshadowed when the match was almost not completed thanks to an incident in the 59th minute which resulted in a scuffle between United's Taxiarchis Fountas and Damien Lowe followed by the match being stopped.

Fountas "called [Lowe] the N-word." right back DeAndre Yedlin said after the match. "When we saw Aime [Mabika] react the way he did, we knew it was serious. As soon as I heard what he said, I got pretty emotional, as well."

Miami players told Neville that the team wouldn't continue the game until something was done with Fountas. After Neville spoke to Wayne Rooney, Fountas was removed from the match but not before yellow cards were issued to both him and Lowe.

We stand united on and off the field. pic.twitter.com/pC3Yg7THpM

When asked about the incident after the match, head referee Ismail Elfath said, "Both Damion Lowe of MIA and Taxi Fountas of DCU were issued yellow cards for lack of respect of the game displayed during the original altercation prior to any reporting of a racial incident." He then added that, "No official heard any racist or abusive language. The VAR and AVAR also did not hear any such language and did check the incident."

And Fountas himself denies using the language.

"D.C. United are aware of the allegations involving a player during the match against Inter Miami CF. The club will work closely with Major League Soccer and Inter Miami to investigate the incident.", D.C. United said in a statement issued after the game.'

In a statement to AP Sports an MLS spokesperson said, "MLS has zero tolerance for abusive and offensive language and we take these allegations very seriously. An investigation into this matter will begin promptly. Further information will be provided upon completion of that investigation."

Neville did praise how Rooney and the head referee managed the situation but it's also obviously one that they shouldn't have been put in as it should be a player's responsibility to understand the weight of words said on the pitch. Rooney didn't have much to add to the situation outside of confirming that Inter Miami had a complaint that will be investigated but DeAndre Yedlin, a member of the Black Players for Change group within MLS said that hopes that the league and D.C. United will take further action.

If it was left to him, Yedlin said he would issue a lengthy suspension, so it will be interesting to see what the league does in this situation given the leagues public stances on how there's no place for racism. New programs to increase representation were put in place in reaction to racism from Dell Loy Hansen that led to his forced sale of Real Salt Lake. But the last league investigation also found no wrongdoing in Franco Fragapane reportedly directing a slur at Diego Chara which is why the handling of this investigation will be critical.

"It shouldn't take something like this to have these conversations and unfortunately, it's at that point over and over again so it's like beating a dead horse. That's why it's going to be very interesting to see what kind of stance the league takes against this because I believe that the league can make a very powerful statement so we'll see how serious they are on this topic." Yedlin said, "We have a lot of campaigns. You can wear t-shirts, we can have signs to say no to racism and all. But at the end of the day, it keeps happening so at what point is there going to be a real stand made that says no bullshit."

Being a veteran leader, Yedlin wanted to make sure to be there for his guys as the team and himself were emotional after the match. The hope is that the situation is handled properly as Miami has a playoff race to focus on but Miami is a strong team with a solid core of leadership behind them. Yedlin said, "sometimes you have to go through adversity to realize how much you truly love each other" so the team can bounce back stronger from this to close out their last two matches of the season.