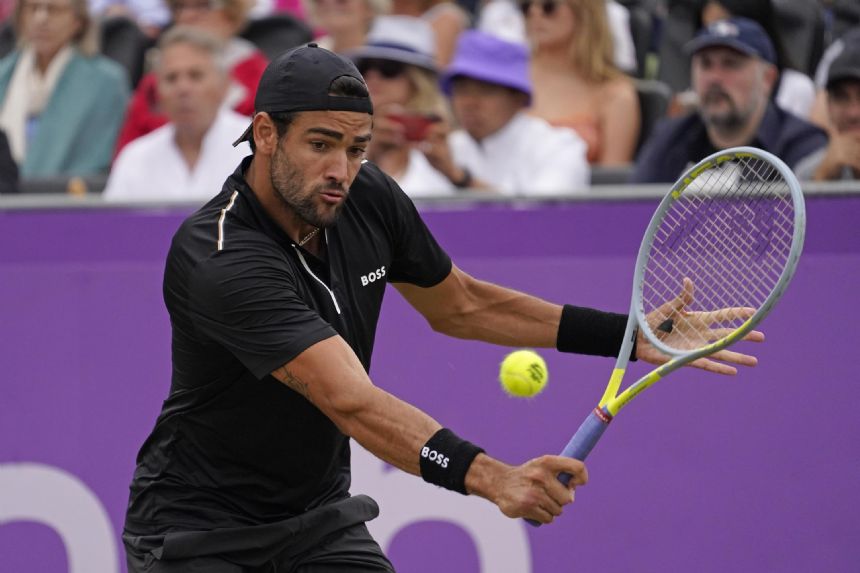 LONDON (AP) - Matteo Berrettini was unfazed by a rain delay in beating Botic van de Zandschulp on Saturday to reach the Queen's Club final for a second straight year and deftly handled a marriage proposal.

During his on-court interview, the second-seeded Italian was propositioned from someone in the crowd.

" Let me think about it," a smiling Berrettini responded.

Berrettini has won 19 of his last 20 grass-court matches with the only loss coming to Novak Djokovic in last year's Wimbledon final.

He will play Filip Krajinovic of Serbia or Marin Cilic, the two-time champion from Croatia, in Sunday's final.

The Italian hasn't lost since his return to competitive play after three months out with a hand injury. He beat Andy Murray in Stuttgart last week to claim his third grass-court title.

Berrettini dropped only four points on his first serve Saturday and hit 24 winners to nine unforced errors. He called the win his best of the week.

"Today was really tough match, we stopped for the rain," he said of the delay in the second set.

Berrettini broke the Dutchman on the first point back after play resumed to take a 4-2 lead.

"We have to adjust to everything," he said. "We have to be ready to stop and then to come back. I was ready when I had to be ready."