Deshaun Watson settles with 20 of the 24 women who sued him, plus ranking the NFL's top 10 tight ends 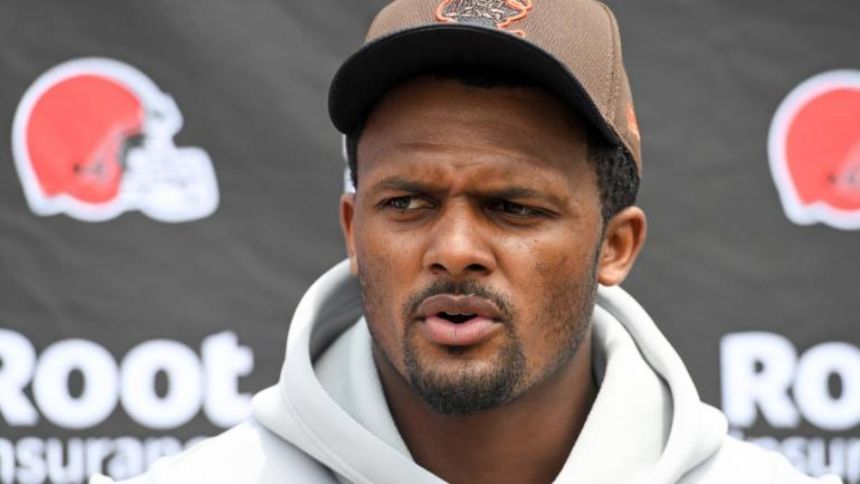 Welcome to the Tuesday edition of the Pick Six newsletter.'

The end of June is usually a slow period for NFL news, but um, someone must have forgotten to tell the NFL that because the last 24 hours have been kind of crazy.'

Over the past day alone, we've seen:'

1. Deshaun Watson that were filed against him.'
2. Ndamukong Suh that he likely won't be returning to the Buccaneers in 2022. '
3. Chase Claypool trying to convince the world that he's one of .'

We'll be covering all of that today and more, which means I should probably stop yapping now so we can get to the rundown.'

The Pick Six podcast is usually hosted by Will Brinson, but he's on vacation this week so we had to bring in a special guest host, and surprise, surprise, that guest host was me. That's right, I'm pulling double-duty this week: I'm writing this newsletter and hosting the podcast. I'm a true renaissance man... if writing a newsletter and hosting a podcast count as being a renaissance man.

For Tuesday's show, I was joined by Bryan DeArdo and we discussed the top 10 running back seasons in NFL history. During the podcast, DeArdo revealed his top 10 and then I did my best to make him justify each one of his picks.'

So why was Barry Sanders' 1997 season so impressive?'

"Barry runs for just 53 yards in the Lions' first two games combined because the new coach (Bobby Ross) put a fullback in front of him, which Barry hated. They get rid of the fullback and Barry runs for 2,000 yards in his final 14 games," DeArdo explained. "He finished the year with 14 100-yard games, which is still the record for most 100-yard games in a season. He also had an average of 6.1 yards per carry, plus he had 2,358 yards from scrimmage, which is the sixth-most all-time."

Sanders had such a prolific season that he ended up winning MVP even though the Lions finished just 9-7 that year.'

Anyway, if you want to hear DeArdo and I go through each of the top 10 seasons on the list, then'be sure to click here'so you can listen to today's show. On the other hand, if you want to see how handsome I looked in the host's chair, you can watch today's episode on YouTube by clicking here.'

If you don't feel like listening or watching the podcast today, you can also'.

With Deshaun Watson potentially staring at a , the Browns quarterback made a major move to put his legal troubles behind him Tuesday by that were filed against him. '

Here's the latest information on the Watson cases:'

Like we mentioned yesterday, the NFL has a long history of dumping suspensions and other bad news on the Friday before the Fourth of July, so it won't be surprising at all if the league were to make an announcement about the Watson case on July 1. For now, I'd say that's the next date to keep an eye on.'

As you may or may not have noticed, we love to rank things here at APSports.com and because of that, we thought we would spend the next few weeks ranking every position group heading into the 2022 season.'

After ranking the NFL's top 10 wide receivers Monday, we're going to move on to tight ends today. The top 10 list below was put together by Jordan Dajani, and if you'd like to tell him how perfect it is, you can do'that by clicking here. That link will take you to his Twitter profile, where you can also argue with him if you don't like his list.'

One noticeable absence from this list is Rob Gronkowski. This list is meant to rank the top 10 tight ends going into the 2022 season, and since we don't know , he was left off the list.

If you want a detailed explanation of Jordan's rankings, then be sure to'.'

Between the draft and free agency, nearly every team in the NFL has made a quite a few moves this offseason, but that doesn't necessarily mean they've managed to fill every hole on their roster. As a matter of fact, most teams could still stand to make at least one more move.'

With that in mind, we decided to make a list of the one remaining offseason priority for each AFC team.'

Here's a look at four of the teams from the list, along with a breakdown from APSports.com's Josh Edwards on why the listed need is still a big one.'

With the dead part of the NFL calendar officially upon us, the NFL news cycle can sometime screech to a halt, but that's not going to happen this week thanks to Chase Claypool, who had some very interesting things to say during .'

Let's go over a few of those things:'

If you want to see the entire interview with Claypool, you can check it out on YouTube by clicking here. '