Devils hope they have right mix of youth, veterans 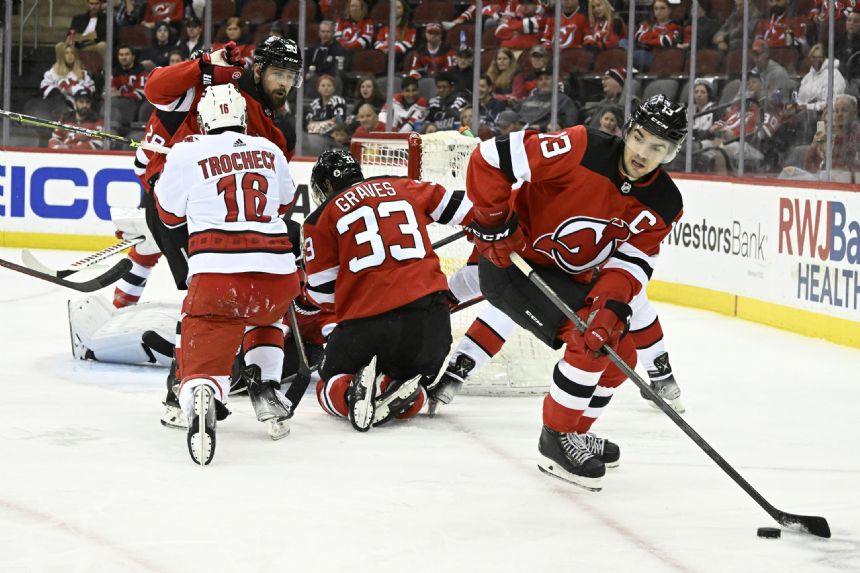 NEWARK, N.J. (AP) - The New Jersey Devils have been one of the youngest teams in the past four seasons and missed the playoffs every time.

The COVID-19 pandemic year was the only one in which they came close to making the postseason, only because the league increased the number of playoff teams from 16 to 24 to compensate for a shortened season.

The story is getting old, but the kids are, too, and the Devils' Jack Hughes, Nico Hischier and Jesper Bratt want to do something about it.

There's no doubt Lindy's Ruff's team has scoring talent with those three and the addition of free agent Ondrej Palat up front. There's also the continued development of forwards Yegor Sharangovich and Dawson Mercer. To shore up the league's fourth-worst defense, the Devils signed free-agent defenseman Brendan Smith and made trades to acquire goaltender Vitek Vanecek from Washington and defenseman John Marino from Pittsburgh.

"I just could sit here and lie to you ... but I really don't know," Hughes said of his expectations for the season. "I think we just want to be competitive and take it one game at a time, one month at a time and stay in the mix. We want to be in the race all year."

The Devils posted a 27-46-9 record last season and finished with 63 points, the third-worst record in the Eastern Conference. While their goal scoring increased to 248 goals - 19th in the league -they gave up 307 playing seven different goaltenders in a year marked by illness and injury. The number was topped only by Montreal (319), Arizona (313) and Detroit (312).

"You'd like to think as we continue to ascend, Father Time has to help that the top teams that have been the top teams for a while start declining because it's only natural," general manager Tom Fitzgerald said. "So that's kind of your hope. But you can't control that."

Over the past few years, the Devils have added defensemen Dougie Hamilton, Jonas Siegenthaler and Ryan Graves and forward Tomas Tatar, all experienced players.

They are hoping that having Vanecek, who was 20-12-6 last season with 2.67 goals against average for the Caps, will move the team forward.

Here are five things (or people) to watch this season:

The No. 1 overall pick in 2019, Hughes had a breakout year last season with 26 goals and 30 assists. The career-highs came despite being limited to 49 games by a dislocated shoulder early and a knee injury late.

When on the ice, Hughes dominated play with his puck control, passing and skating.

"I think everybody saw a glimpse of that with Jack last year," Fitzgerald said. "He's just fun to watch."

Palat isn't a flashy high scorer. He does the grunt work and was responsible on both ends of the ice so players like Nikita Kucherov, Steven Stamkos and Brayden Point could do their thing - like winning two Stanley Cups.

The Devils traded a couple of familiar faces, sending Pavel Zacha to Boston for Erik Haula and Ty Smith to the Penguins for Marino. Defenseman P.K. Subban, one of the faces of the franchise the past few seasons, retired at 33 after 13 seasons and one Norris Trophy.

Top draft pick Simon Nemec, 18, may have trouble making the roster on defense but Alexander Holtz (20) and Fabian Zetterlund (22) are close after good AHL seasons.

It didn't help last season that Hamilton, one of the top defensemen on the power play, missed 20 games with a broken jaw.

Lindy Ruff, 62, is entering his third season as the old hand behind the bench. The players respect and like his approach to the game, which combines transition offense and defensive responsibility. However, if the Devils struggle early, Brunette is a proven commodity behind the bench - Fitzgerald didn't bring him here just to run the power play.