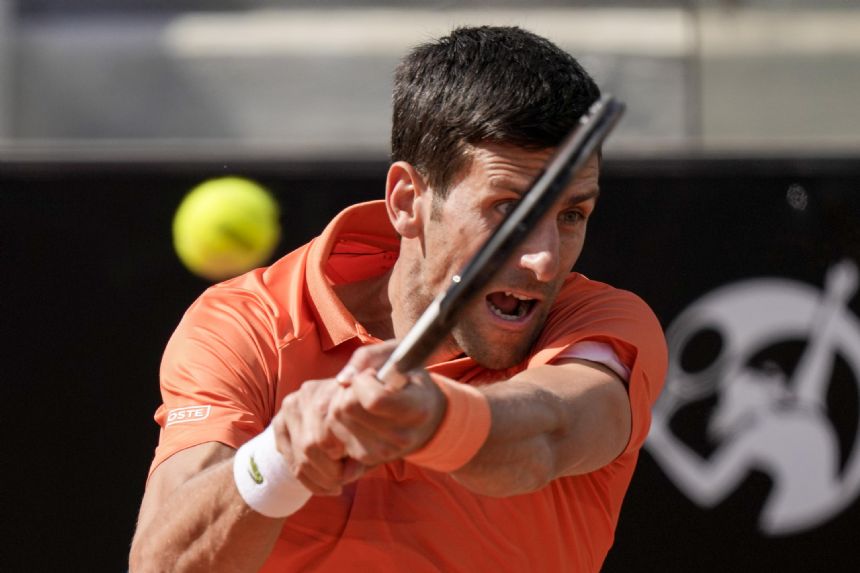 ROME (AP) - Still attempting to get his nearly unbeatable form back following his time away from the tour, Novak Djokovic took another step in the right direction with a 6-3, 6-2 win over Aslan Karatsev in his opening match at the Italian Open on Tuesday.

The top-ranked Djokovic, who is bidding for a sixth Rome title, showed off some vintage scrambling abilities late in the first set when he ran down one shot near the net post then sprinted back across the net to dig out a low backhand volley winner.

It was the type of point that Djokovic pulled off day after day last year when he came within one match of completing a calendar-year Grand Slam - sweeping all four major titles in the same year.

Playing on a court that is one of his favorites, Djokovic celebrated the point by making a gesture with his hands that urged the Campo Centrale crowd to applaud even louder - bringing many fans to their feet.

"You always hope you can play some exciting and attractive points and come out as a winner of those points and celebrate with the crowd," Djokovic said. "That's what the crowd is looking for - they're looking for energy, excitement, fight and they want to see some good tennis.

"We had some nice points today. It's always great to play in the colosseum of tennis," the 20-time Grand Slam champion added.

It was a fairly clean performance for Djokovic, who had only 10 unforced errors to Karatsev's 36.

Djokovic needs to reach the semifinals in Rome to stay No. 1. Otherwise, Daniil Medvedev will take the top spot and the top seed at the French Open, which starts in 12 days.

Djokovic missed several key tournaments earlier this year because he was not vaccinated against the coronavirus - which led to him being deported from Australia ahead of the year's first Grand Slam.

Still seeking his first title of 2022, Djokovic lost the final in his home Serbia Open to Andrey Rublev then was beaten by 19-year-old Carlos Alcaraz in the Madrid Open semifinals last weekend.

In the women's tournament, there was a first-round matchup later between two U.S. Open winners - reigning champion Emma Raducanu and Bianca Andreescu, who raised the trophy in 2019.

Amanda Anisimova, another American and a French Open semifinalist in 2019, held off Czech qualifier Tereza Martincova 6-2, 0-6, 6-4 and will next play Olympic gold medalist Belinda Bencic.