Dolphins' Tyreek Hill responds to Tua Tagovailoa criticism after viral video: 'Can y'all chill or nah?' 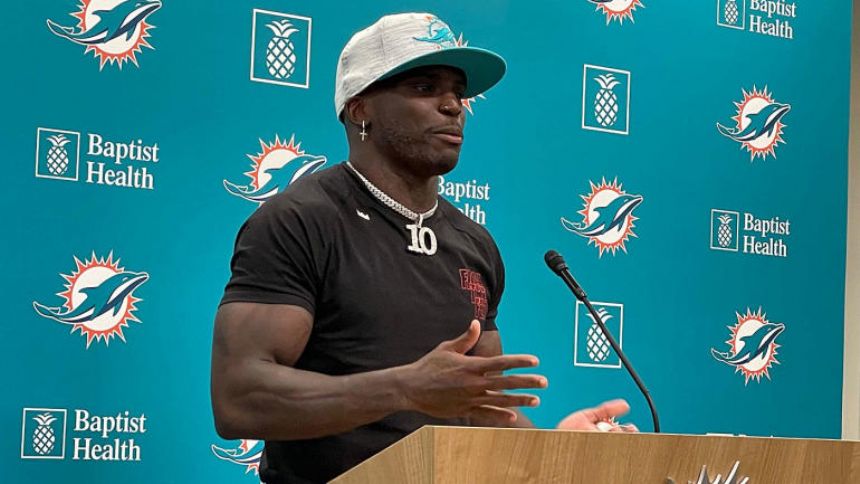 All-Pro wide receiver Tyreek Hill will be playing for a new team in 2022, as the Kansas City Chiefs dealt the speedy pass-catcher to the Miami Dolphins after failing to agree on a contract extension.'Tua Tagovailoa is not the same quarterback Patrick Mahomes is, which has led many to wonder if Hill will have the same impact with his new team.

Earlier this week, the Dolphins tweeted a video of Tagovailoa throwing a deep ball to Hill in workouts. Despite the rocket emoji the Dolphins used in the tweet, Hill clearly had to wait on the long pass and reach behind him to reel it in. This was noticed by fans, who caused the video to go viral.

Hill noticed the criticism his new signal-caller was taking, so he responded indirectly on Twitter with a few workout highlights of his own.'

"Can y'all chill or nah? We talking about practice."

Can y'all chill or nah ? We talking about practice ?????? @Tua ??#Dimez # Uno #soulrunner pic.twitter.com/HO6QnRuZxD

Dolphins offensive coordinator Frank Smith that the offense will not be limited vertically with Tagovailoa in 2022,'per David Furones of the'Sun Sentinel.

The book of Tuanigamanuolepola Tagovailoa is still unfinished, as the 24-year-old has a chance to develop into a star -- especially with what he has around him now. Miami has a new offensive-minded head coach in Mike McDaniel, new weapons in Ced Wilson and Hill, new starters on the offensive line and then three new running backs who all have legitimate starting experience. The stage is set for him to take a big step forward in 2022.'