Dortmund licks wounds, pivots to rebuild for next season 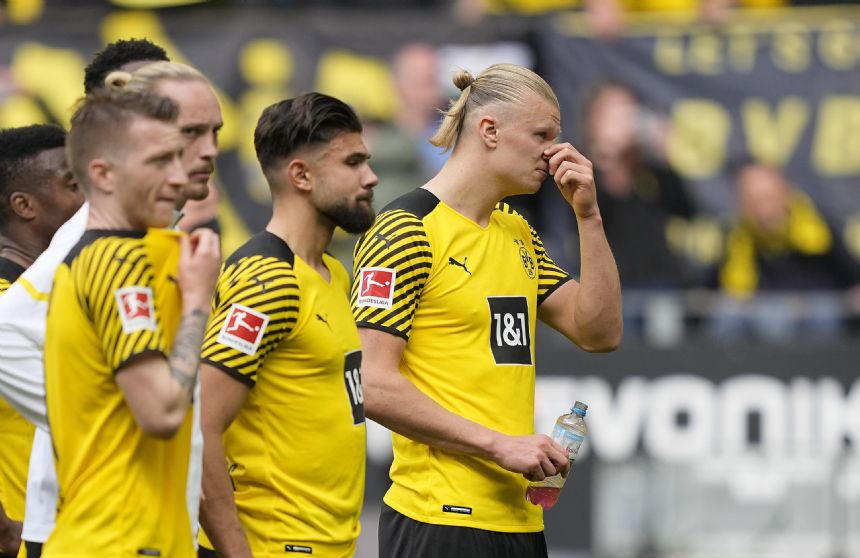 BERLIN (AP) - Frustrated and disappointed by its failure to live up to expectations this season, Borussia Dortmund is already looking ahead to the next.

Star player Erling Haaland won't be there to score a goal a game after his transfer was agreed Tuesday with Manchester City, but his loss was expected and the club has moved to address problems in other areas.

Defenders Niklas Sule and Nico Schlotterbeck are joining from Bayern Munich and Freiburg, respectively. The hope is they can help shore up a defense that has conceded 51 goals in the Bundesliga so far - the worst record for any team in the top seven.

Dortmund also moved to soften the blow of Haaland's departure by announcing the signing of forward Karim Adeyemi from Salzburg, though he is seen more as a replacement for Jadon Sancho, who left the previous summer for Manchester United.

All three new arrivals are Germany internationals. Together with other targets they are supposed to raise the level of the team and instill a winning mentality.

"The aim is to create a group that is able to win big games," Dortmund coach Marco Rose said. "We want to align ourselves in such a way that we ultimately have the chance to attack at the top."

Too often this season, Rose's team simply failed to compete in big games, getting knocked out in the group stage of the Champions League, then falling to Rangers at the first hurdle in the Europa League.

Second-division St. Pauli knocked Dortmund out the quarterfinals of the German Cup, while its league campaign was undone by losses to Bayern, Leipzig, Hertha Berlin, Freiburg and Borussia Monchengladbach. Bayer Leverkusen racked up a 5-2 win in Dortmund. There were also dropped points against Cologne, Bochum and Augsburg.

Dortmund hosts Hertha on Saturday for its final league game. While Hertha is fighting for survival, Dortmund has little to play for after blowing its chance of challenging perennial champion Bayern for the title.

Dortmund's 3-1 loss in Munich on April 23 only confirmed what had long been apparent - that Bayern would win its 10th consecutive league crown. Even those at Bayern bemoaned the lack of a worthy challenge this season.

Dortmund fans were left questioning the players' will to fight for the club's aims.

"I didn't have the feeling that the team squeezed everything out of itself this year," Dortmund managing director Hans-Joachim Watzke told a radio show hosted by local newspaper "Ruhr Nachrichten."

The three signings so far are unlikely to conclude Dortmund's summer transfer activity. Sebastian Kehl is taking over from Michael Zorc as sporting director and his first priority will be to find a goal-scorer that can compensate somewhat for Haaland's loss.

"We need someone we can rely on so we're competitive," Kehl said. "Speed is important in modern soccer, but we also need a certain physicality."

Roman Burki, Axel Witsel, Marcel Schmelzer, Marin Pongracic and Brazilian midfielder Reinier are all set to leave the club, while the futures of defenders Nico Schulz and Manuel Akanji are uncertain. The latter is reportedly in contact with Manchester United. Portugal left back Raphaël Guerreiro is another who could potentially leave.

Bayern will also move to strengthen its squad, so it remains to be seen if Dortmund's rebuild can bring it any closer to the Bavarian powerhouse.

"The same champion 10 years in a row, it can't go on like this forever," Watzke said.