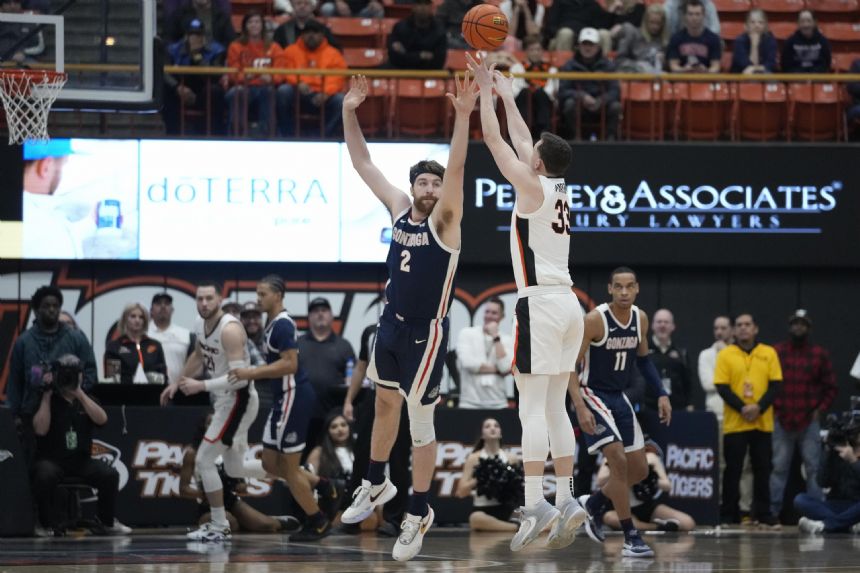 STOCKTON, Calif. (AP) - Drew Timme scored 24 of his career-high 38 points in the second half, including 18 straight points during one stretch, and No. 6 Gonzaga pulled away in the closing minutes for a 99-90 win over Pacific on Saturday night.

Gonzaga (17-4, 6-1 WCC) rebounded after seeing its 75-game home win streak come to an end with Thursday's stunning loss to Loyola Marymount. It wasn't the strongest defensive effort by the Bulldogs, but Timme and fellow forward Anton Watson were unstoppable on the interior.

Timme made 17 of 23 shots and almost all of them within a couple feet of the rim. Watson added 16 points and 13 rebounds, and the Bulldogs outscored Pacific 58-38 in the paint. Timme's night would have been even bigger, but he was just 4 of 10 at the foul line.

Rasir Bolton added 16 points for the Bulldogs, who had won their previous three road games in conference play by a combined eight points, and Julian Strawther had 15.

Gonzaga avoided losing consecutive games in conference play for the first time since late in the 2014 season when the Zags dropped back-to-back games at BYU and San Diego. Gonzaga has not lost consecutive games at any point since December 2018.

Jordan Ivy-Curry led five Pacific players in double figures with 17 points. Nick Blake scored 16 before fouling out. Keylan Boone finished with 15, Luke Avdalovic added 13 and Judson Martindale finished with 12. Pacific (10-12, 3-4) made eight 3-pointers in the first half and was tied at 47 at halftime, but the Tigers were just 1 of 8 from deep in the second half.

After Watson's dunk to open the second half scoring for Gonzaga, Timme took over. He scored the next nine field goals for the Bulldogs, all around the rim and Gonzaga built a 61-49 lead.

Pacific hung around and was within 65-63 when Timme scored his ninth consecutive field goal to push the lead back to four and Gonzaga finally got a basket from someone else when Bolton scored on a layup with 11:46 remaining.

Gonzaga finally created separation in the final four minutes after Strawther's 3-pointer and consecutive baskets by Timme gave the Zags a 12-point lead.

Gonzaga: Timme was unstoppable on the interior in part due to Pacific's decision not to double-team. Timme moved into second place on the school's all-time list for career made field goals. Timme has 782 and moved past Jim McPhee, who had 774 from 1986-90.

Pacific: The Tigers lost their 19th straight to the Bulldogs and have not defeated Gonzaga since joining the WCC. Pacific's only win over Gonzaga came in 1976.

Gonzaga: The Bulldogs are at Portland next Saturday night.

Pacific: The Tigers are at Santa Clara next Saturday night.