Expansion San Diego Wave FC and Angel City FC are atop the NWSL, how have the two new sides started so hot? 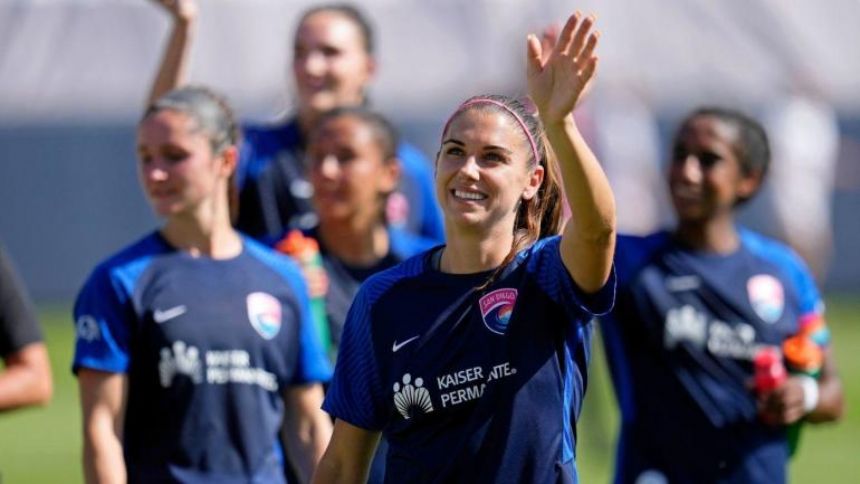 The 2022 NWSL regular season wrapped up its third week on Sunday. Due to overlap with the Challenge Cup and a game rescheduled due to COVID-19 protocols, only seven of the leagues 12 teams have played three matches. Only one time has won three games, and that's California expansion team San Diego Wave FC. Only one team has even won two matches, and that's the other expansion team, Angel City FC. After struggling in the Cup, the league's newest expansion franchises are reintroducing themselves to NWSL audiences in the regular season, and over the last three weeks, the league's newest teams have taken down four 2021 NWSL playoff teams.'

Let's take a look at exactly how these California sides have been picking up results against established NWSL teams:

San Diego are an attacking force thanks to Alex Morgan

Head coach Casey Stoney and her squad are the only club to kick off their regular season with three consecutive wins after defeating the Chicago Red Stars 2-1, on Sunday. In that match it took them almost until the hour mark to break through, thanks to an Alex Morgan penalty.

"I think I played it first to Alex [Morgan] and then she played me again," Sofia Jakobsson said of the play. "I could run and felt like I would have a good opportunity to score, but then [Kayla Sharples] fouled me and then we got a penalty." While fouls can be lucky, San Diego are committed to making their own luck. They've take 35 touches per match in the opposition penalty area so far this season, that's more than any other NWSL team.

In general San Diego has simply buried teams with shots and chances, and trusted that eventually that would turn into goals. They take 18 shots per match, tied for the most with the Portland Thorns, and their total of 2.7 expected goals (xG) per match is much higher than Portland's second-highest total of 1.7 xG. One slight note of caution is that the Wave have had three penalty kicks already this season, all converted by Morgan, but even if you strip those out, their 1.9 xG per match still leads the league.

The Morgan penalty was also her fifth goal on the season, and she's now scored five of her team's seven goals, which is some cause for concern as eventually San Diego will need to add some support to their star striker. Late in the game on Sunday it was Kayla Riehl who added an insurance goal which turned out to be needed as they immediately turned around and conceded on the other end.

But Ava Cook gets one back for the Red Stars ?? pic.twitter.com/47quSMu8dE

For Wave assistant head coach Rich Gunney the lack of the team's ability to close matches out is concerning, and after the match he addressed it, saying, "Chicago came with a lot of heart and determination, especially at the end there. We'll be frustrated and disappointed with how we closed the game out, so we have some learnings there ... I'm really pleased with the mindset and the attitude of the players coming out in the second half. We put a lot of pressure on Chicago, got the goal and we should've closed out with it being 2-0."

Realistically, though, the sides defensive performances have also been some of the strongest in the league this season. They concede 9.3 shots per match, the fewest of any team in the league, and only 0.5 xG per match, also the best figure. Coaches always need something to worry about, but if this team can continue to suppress opponents like they've done so far this season, and like they did against Chicago on Sunday, they won't have to worry much about giving away leads. Especially given the kind of character that Gunney believes this team has.

"We showed some character in the Challenge Cup, we've had some adversity we've had to respond to, we've gone to Houston which is a tough place to go and play, and we've worked hard and gotten the result," said Gunney.'

"I think the group has shown already across the whole team, players, staff, that it's going to take a big team effort together and the mentality piece is important."

Want more coverage of women's soccer? Listen below and make sure to follow Attacking Third, A AP Soccer Podcast devoted to bringing you everything you need to know from the NWSL and around the globe. '

Angel City's presence at the top of the table is somewhat more confusing. The Los Angeles expansion side are sitting in second place on the league table after wins against 2022 Challenge Cup champions North Carolina Courage and the 2021 NWSL Champions Washington Spirit, sandwiched around a loss to the Orlando Pride.

As the regular season is only three weeks old, so is Angel City's current NWSL competitive history. Los Angeles struggled during their six matches in the Challenge Cup, but what they've shown recently is they're at least a team capable of capitalizing on a schedule that has them catching opponents at the right time.

Angel City closed out their Challenge Cup group stage with a 1-0 win over a depleted Portland Thorns side impacted by several players out due to COVID-19 protocols. Then, the franchise hosted their historic regular season home opener against a North Carolina Courage side still competing in the Cup, with a semifinal showdown with the Kansas City Current on the horizon. After scoring two goals in the opening 13 minutes, hung on for the victory as the Courage grew into the game.

And now, the club now has another another narrow victory, this time against the Spirit, who limped into week three after three games in 12 days that included a Challenge Cup final defeat. And even that victory was a narrow one, with a 1-0 scoreline thanks to an impressive finish from star forward Christen Press.'

Manager Freya Coombe said the chance came because of their tactical approach, but also conceded a lot of it was down to some individual quality. "We know that they sent their outside back a little higher on that side, and there was an opportunity of getting that rotation coming inside and then also how they jump. So being able to switch was really important," she said.

"It's important for us to be a little bit varied in our attack and not always give it the same look each time. So that was something that we had worked on and identified, but obviously the finish as well and that was all Christen."

And really, even against the tired legs of the Spirit, who were without midfielder Ashley Sanchez, it wasn't exactly a dominant performance. Angel City had 11 shots but for only 0.47 xG, while the Spirit's nine shots were worth 0.65 xG. Three points is three points, but Angel City were handed a depleted opponent and still needed a bounce or two to go their way to take the match.

Angel City's record is so good because they are making the most with the little they are producing. Angel City have scored three goals while conceding two over their first three weeks of the season, while ranking 10th out of 12 clubs in total possession averaging 45 percent. Their xG per game of 0.9 is 11th suggesting the low total of goals scored isn't a fluke, it's a fair representation of the chances they're creating.

The one place they do have strong numbers is defensively. They concede only 1.0 xG per game, third best in the league. And shutting down the Spirit's midfield, even without Sanchez is no small feat. "There were moments in the game where they were able to play through us a little bit too easily, but we went back in and rebuilt the block to try and prevent them from playing for us, forcing them outside," Coombe said after the match.

So there really is something here for Angel City to build on. Despite the lackluster numbers, the team is sitting in second place on the league table behind San Diego, and will be back at home to face Kansas City Current on Saturday. Meanwhile, they'll hope to get Ali Riley back, the team captain who as been out thanks to COVID-19 protocols.'

Given their stats and their schedule, it's reasonable to have a healthy skepticism about Los Angeles early in the season, but on the other hand despite all the problems Angel City is doing something other established NWSL clubs have failed to do in the opening weeks of the regular season, win.'