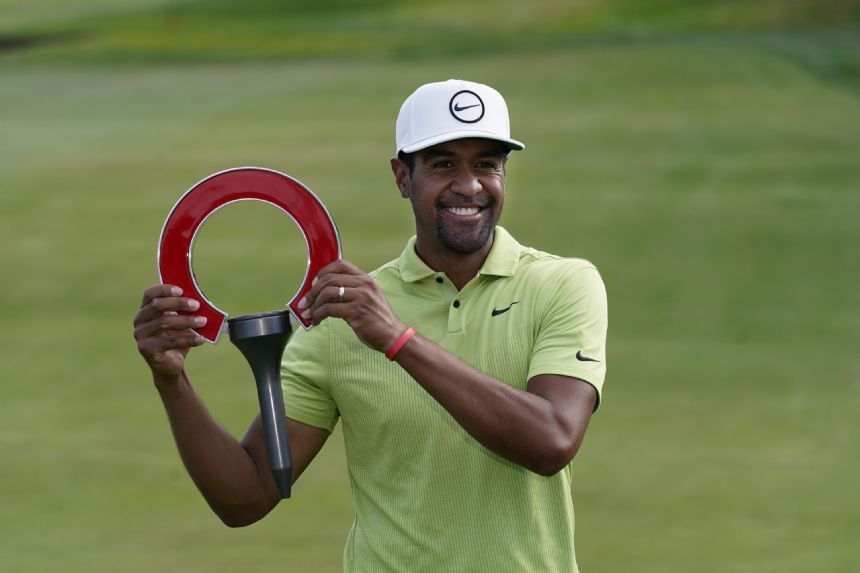 Finau coasted to his fourth career victory, a third title in under a year. He was the 3M Open winner last week in Minnesota, where he rallied from five strokes back to win by three. Brendon Todd was the last to win two straight in the regular season, doing it in 2019.

Finau, the Salt Lake City native with Tongan-Samoan heritage, began his stretch of success last August at The Northern Trust, where he had his first victory in five years and 142 PGA Tour starts.

Finau stopped another drought in Detroit, winning for the first time in six attempts when he had or shared the 54-hole lead in a PGA Tour event. With his sixth birdie at No. 17 and a closing par, he broke Nate Lashley's tournament record of 25 under set in 2019 during the inaugural PGA Tour event.

The PGA Tour will close the regular season next week at the Wyndham Championship. Players on the bubble will have one last shot to finish in the top 125 of the FedEx Cup standings to earn a spot in the playoffs and a full card next season.

BEDMINSTER, N.J. (AP) - Henrik Stenson's decision that cost him the Ryder Cup captaincy paid large and immediate dividends when the Swede won the LIV Golf Invitational at Bedminster and picked up more than $4 million for three days' work.

Staked to a three-shot lead going into the third and final round at Trump National, Stenson opened with a 20-foot birdie putt and never led anyone closer than two shots the rest of the way.

He closed with a 2-under 69 for a two-shot victory over Matthew Wolf (64) and Dustin Johnson, who birdied the last hole for a 68.

Stenson, five years removed from beating a field of more than 20 players, picked up $4 million for winning and an additional $375,000 for his team finishing second.

The big payoff - not including a signing bonus reported to be about $50 million - comes less than two weeks after Stenson decided to join the Saudi-funded LIV Golf series.

Stenson had pledged full support to the European tour when he became Ryder Cup captain and March, and the tour stripped him of the job four months later when he changed his mind.

IRVINE, Scotland (AP) - Ayaka Furue of Japan ran off six straight birdies in the middle of her round and rallied from a four-shot deficit with a 10-under 62 to win the Women's Scottish Open for her first LPGA Tour title.

A seven-time winner on the Japan LPGA - once as an amateur - Furue became the second rookie to win on the LPGA Tour this year, and she did it in style at Dundonald Links.

Starting the final round four shots behind Celine Boutier of France, the 22-year-old finished the front nine with four straight birdies and added two more to start the back nine. She never let up, playing bogey-free to win by three.

Boutier was still in good shape until making three bogeys on the back nine for a 69.

Furue finished at 21-under 267 and won $300,000, along with valuable momentum going into the final major of the year next week in the Women's British Open at Muirfield.

ST. ANDREWS, Scotland (AP) - American Sean Crocker held off a spirited challenge from Eddie Pepperell to claim his first European tour title with a wire-to-wire victory in the Hero Open on Sunday.

Crocker closed with a 4-under 68 at Fairmont St. Andrews to finish 22-under par and one shot ahead of Pepperell, who had piled on the pressure with a closing 65.

Crocker, who was born in Zimbabwe and raised in California, lost his two-shot overnight lead early in the final round as Pepperell and Denmark's Oliver Hundeboll both made flying starts, but a birdie on the sixth and three more in four holes from the 10th restored his advantage before Pepperell's birdie on the 18th set up a nervous finish.

Pepperell reached a ranking of 32nd following the second of his two wins in 2018, but has struggled in recent seasons and had his first top-five finish in three years.

Xiaowen Yin of China closed with a 4-under 68 and won on the first hole of a playoff by making a 12-foot par to beat Gina Kim in the FireKeepers Casino Hotel Championship on the Epson Tour. It was Yin's first professional victory. ... Todd Clements closed with a 4-under 68 and sailed to a six-shot victory in the Irish Challenge at The K Club for his first Challenge Tour title. Tom McKibbin of Northern Ireland had a 66 to finish second. ... Noah Goodwin wrapped up his first pro win with a 4-under 67, giving the former U.S. Junior Amateur winner a seven-shot victory in the Ontario Open on the Mackenzie Tour in Canada. ... Jaco Prinsloo completed a wire-to-wire victory with a 3-under 69 for a three-shot victory over Jean Hugo in the FNB Eswatini Nkonyeni Challenge on the Sunshine Tour in South Africa. ... Alex Cejka won another senior title, this one in Europe, as he closed with a 2-under 70 for a two-shot victory over Paul McGinley in the JCB Championship on the Legends Tour. ... Minami Katsu capped off her dominant performance on the Japan LPGA by closing with a 1-under 71 for a five-shot victory in the Rakuten Super Ladies.