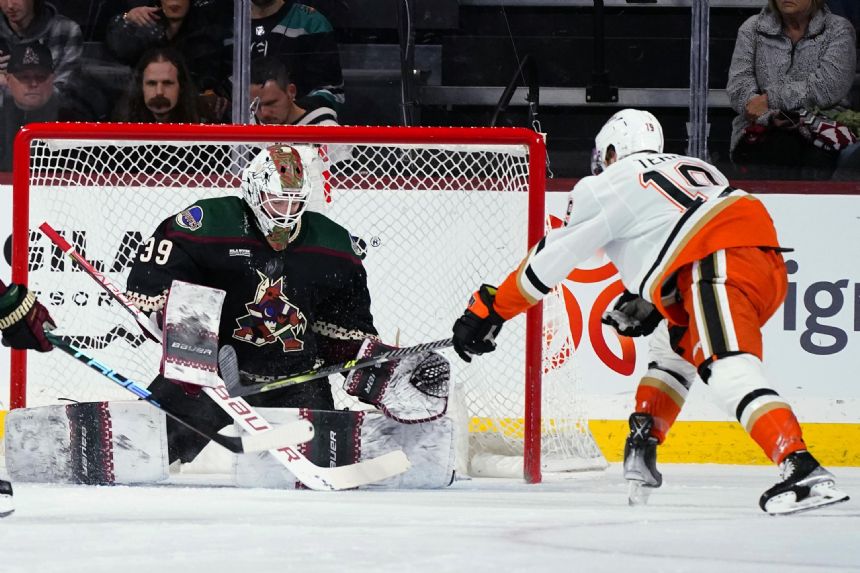 Plagued by slow recent starts, the Ducks jumped on the Coyotes early and took advantage of a game misconduct on Arizona's Juuso Valimaki to build a 4-0 lead. Troy Terry had a goal and two assists for Anaheim, with Frank Vatrano adding a goal and an assist.

Arizona picked up the intensity after Fowler's second goal, cutting Anaheim's lead in half on goals by Barrett Hayton and Nick Schmaltz.

Adam Henrique ended the Coyotes' hopes of completing the comeback on an empty-net goal with 3 1/2 minutes left.

The Ducks had to rally from three-goal deficits their last two games, beating Columbus 5-3 and losing to Buffalo 6-3.

Anaheim got off to a much better start against Arizona, scoring late in the first period when Vatrano beat Ingram with a one-timer from the slot.

In the second period, Anaheim took advantage after Valimaki received a five-minute game misconduct for a retaliatory slash to the back of Max Jones.

Terry scored before Valimaki was sent off, using some nifty stick handling to get around Dylan Guenther then beating Ingram to the glove side on a delayed penalty. Fowler made it 3-0 on the power play, beating Ingram through traffic from just inside the blue line.

Fowler scored again from near the blue line early in the second period on a shot Ingram had trouble seeing through a screen.

The Coyotes fought back.

Hayton scored on a short breakaway midway through the third period after Ducks defenseman Simon Benoit turned it over in his own end. Schmaltz scored on a power play less than four minutes later, punching in a rebound after Jakob Chychrun broke his stick on a shot.

They couldn't keep it up and Henrique finished it off.

NOTES: Arizona F Milo Kelemen made his NHL debut after being called up from Tucson of the AHL. The 23-year-old Slovakian had one shot and three hits in 10 minutes of ice time. ... Anaheim D John Klingberg didn't play due to an illness. ... The Coyotes signed Valimaki to a one-year contract extension earlier Tuesday. The 24-year-old Finnish player has five goals and 23 assists in 125 career NHL games with Arizona and Calgary. ... Anaheim F Trevor Zegras had an assist on Fowler's first goal to extend his point streak to six games.

Ducks At at Colorado on Thursday night.