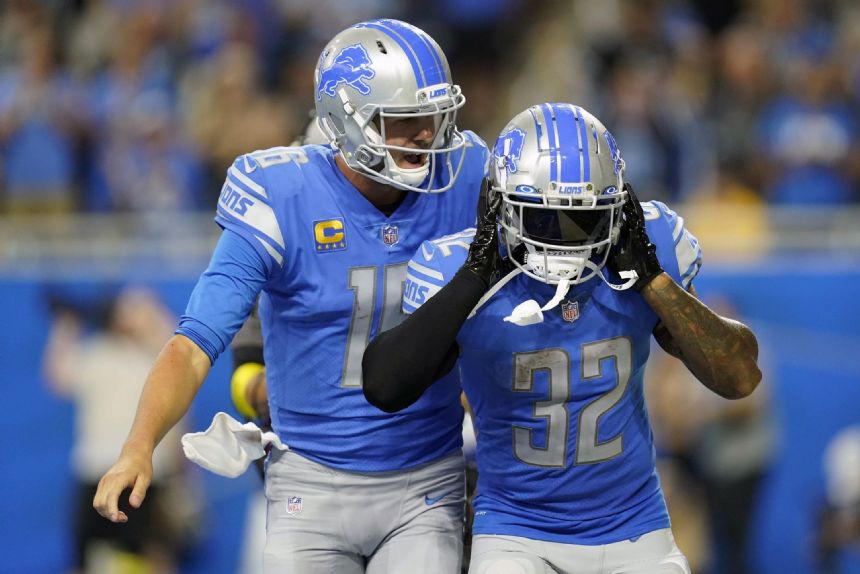 Aidan Hutchinson had three sacks in the first half to help the Lions (1-1) lead 22-0 at halftime, and Will Harris had an interception in the second half to stunt the Commanders (1-1) as they tried to rally.

Washington made adjustments to give Carson Wentz more time in the second half. Wentz took advantage, pulling his team within seven points in the third quarter with a 15-yard touchdown pass to Curtis Samuel, a 20-yard pass to Logan Thomas and 2-point conversion to rookie Jahan Dotson.

Detroit restored its cushion when Goff converted a third down by barely getting a pass off under pressure to D'Andre Swift, who slipped to the turf before regaining his footing and cutting across the field for a 22-yard touchdown.

Washington went for it on fourth-and-1 from its 26 on the ensuing possession and Terry McLaurin made the gamble pay off with 7 yards on an end-around. The speedy receiver converted a third down later in the drive with a 17-yard catch that helped set up Antonio Gibson's 1-yard run.

Commanders coach Ron Rivera went for a 2-point conversion and Wentz was picked off, allowing Detroit to keep an eight-point lead.

Goff's threw an 11-yard touchdown to St. Brown on the ensuing drive, giving Detroit a 36-21 lead.

Wentz connected with Dotson for a 1-yard touchdown with 1:56 left and Joey Slye missed the extra point to the right, allowing the Lions to lead by nine and raising more questions about Rivera's decision to go for a 2-point conversion.

Slye's onside kick went about 5 yards, ending Washington's slim chance to come back against a team that was favored to win earlier in the week for the first time since late in the 2020 season.

In a matchup of the top two picks from the 2016 draft, Goff outplayed Wentz.

Detroit's quarterback was 20 of 34 for 256 yards with four touchdowns. Wentz completed 30 of 46 passes for 337 yards with three touchdowns and an interception, leading an offense that didn't have a first down until its sixth possession.

St. Brown had nine receptions for 116 yards with two touchdowns. He's the first player in league history to have six straight games with at least eight catches and a score. The second-year pro tied an NFL record with eight-plus catches in eight consecutive games.

Hutchinson, the No. 2 pick overall, joined Julius Peppers (2002) and Chip Banks (1982) as top-10 selections to have three sacks within the first two games of their career. The 22-year-old Hutchinson is the fourth-youngest player with a three-sack game, slightly older than Vernon Maxwell, Nick Bosa and Greg Townsend when they pulled off the feat.

Lions: Play at Minnesota on Sunday.