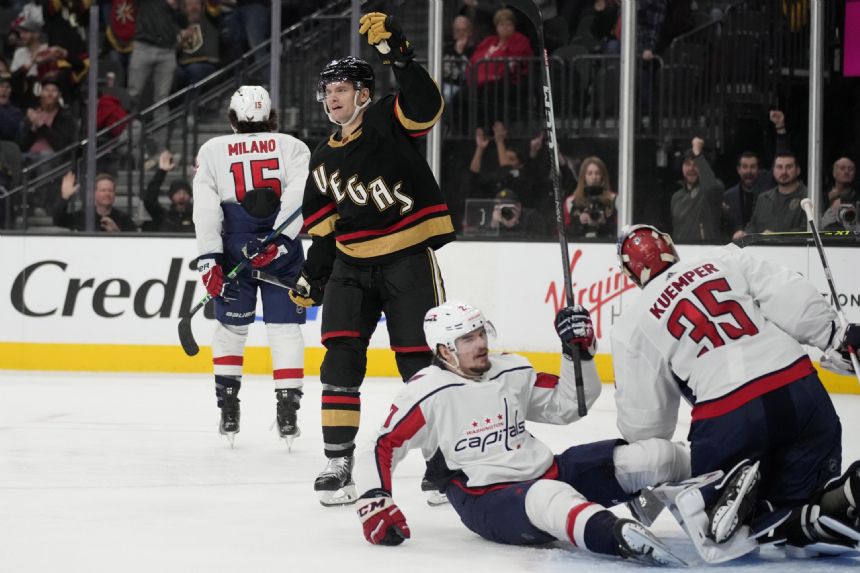 Washington captain Alex Ovechkin didn't play because of a lower-body injury and is listed by the Capitals as day to day. He leads the team with 30 goals and 52 points.

Even if Ovechkin had been on the ice, the Capitals might have had trouble against the Knights, who had looked anything but sharp in losing four of their previous five games. They went 3-4 on a homestand and don't return to T-Mobile Arena until Super Bowl Sunday.

Nicolas Roy had a goal and two assists for the Knights, Alec Martinez a goal and an assist and Alex Pietrangelo and Chandler Stephenson two assists apiece. Goalie Logan Thompson saved 20 shots to run his career record against Washington to 3-0.

Knights coach Bruce Cassidy has bemoaned Vegas' slow starts during the lull. Opponents had scored the opening goal in five consecutive games before the Capitals came to town.

Vegas came out firing, scoring two goals in the first 7:36. Martinez buried a rebound when Stephenson's shot hit the left post, and Roy scored off a pass from Jonathan Marchessault to complete a 2-on-1 breakaway.

The Knights added three goals in the second period - from Michael Amadio, Byron Froese and Cotter - to go up 5-0. It was the first goal of the season for Froese, who has spent most of the season playing for the Knights' American Hockey League affiliate in Henderson.

The Capitals finally scored with 1:40 left in the second when Erik Gustafsson fed T.J. Oshie for the goal.

Both teams traded goals in the third period, with Cotter scoring for the Knights and Marcus Johansson for the Capitals.

Capitals: At Colorado on Tuesday night.