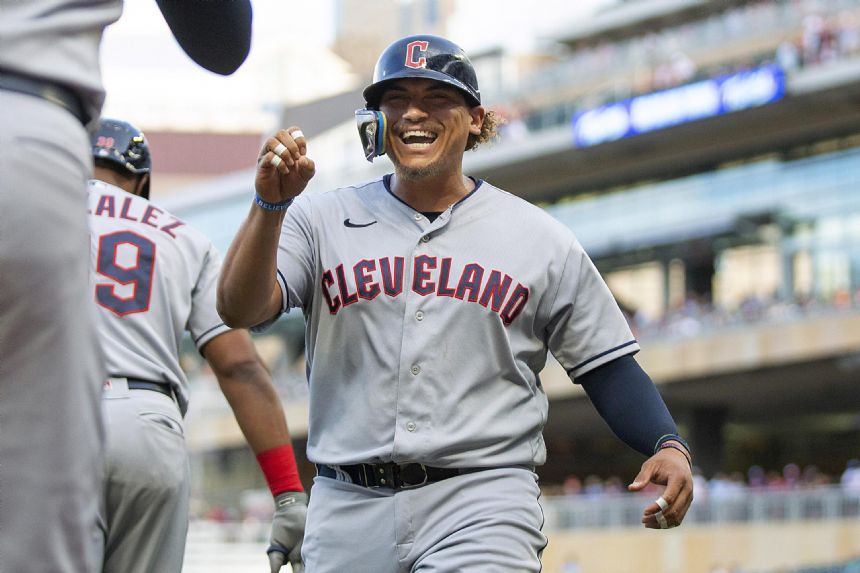 MINNEAPOLIS (AP) - Andres Gimenez had an RBI single in the 11th inning and the Cleveland Guardians beat Minnesota 6-5 Tuesday night to move percentage points ahead of the Twins atop the AL Central Division.

Bryan Shaw, Sam Hentges and Trevor Stephan each tossed a scoreless inning of relief before Emmanuel Clase earned his 16th save in 18 chances for the Guardians, whose 35-28 (.556) record is narrowly ahead of Minnesota's 38-31 (.551). The teams will square off seven more times by the end of June.

With Oscar Gonzalez on second, Gimenez singled to center field with one out and the Guardians improved to 10-2 in their last 12 games and 16-4 since May 30. The teams play

Stephan (3-2) struck out Carlos Correa, Max Kepler and Gary Sanchez, Minnesota's 3-4-5 hitters, with two-on and nobody out in the 10th.

Luis Arraez hit a three-run home run in the seventh to give Minnesota a 5-3 lead, but Franmil Reyes, in his first game in nearly a month, lined a two-run homer off Emilio Pagan with two outs in the eighth to tie it.

A right hamstring injury had sidelined Reyes since May 24. He struck out in his other four at bats.

Down 3-2, Arraez, who leads the majors with a .362 batting average, drilled an offering from Eli Morgan to the seats in right-center for his fourth home run. A few "MVP, MVP!" chants were heard as he rounded the bases.

Morgan had not allowed an earned run in 19 1/3 innings since May 8.

Josh Naylor lofted a home run to the first row of seats in right field for a 3-0 lead in the third, a much better Target Field experience than 51 weeks earlier. Naylor's 2021 season ended June 27 when the right fielder sustained multiple leg fractures and torn ligaments in a gruesome collision with second baseman Ernie Clement on a fly ball in short right field. He was on the COVID-19 list when the teams met in Minneapolis last month.

Steven Kwan had four hits for Cleveland and Jose Ramirez was 1 for 5 with a bloop double in his return to the lineup after missing two games with a right thumb injury. He leads the American League with 62 RBI.

Minnesota's Joe Ryan allowed three earned runs in his first three innings, but bounced back to post three straight scoreless frames. In total, he allowed seven hits and struck out seven, including his final three batters.

Guardians: OF Oscar Mercado was designated for assignment to make room for Reyes. ... RHP Nick Sandlin was optioned to Triple-A Columbus in a corresponding move to Civale's return.

Twins: RHP Josh Winder, out since May 18 with a right shoulder impingement, is scheduled to throw 70 pitches Wednesday in a rehab assignment for Triple-A St. Paul. ... SS Royce Lewis had surgery Tuesday in Dallas to repair his torn right ACL. "Everything seems to have gone well," manager Rocco Baldelli said. ... Out since June 13 with lower back tightness, 2B Jorge Polanco has yet to start full baseball activity, but Baldelli said it won't be too long until he does.

The scheduled starters for Wednesday's second game of this three-game set are RHP Triston McKenzie (4-5, 2.96) for Cleveland and RHP Sonny Gray (3-1, 2.09) for Minnesota.