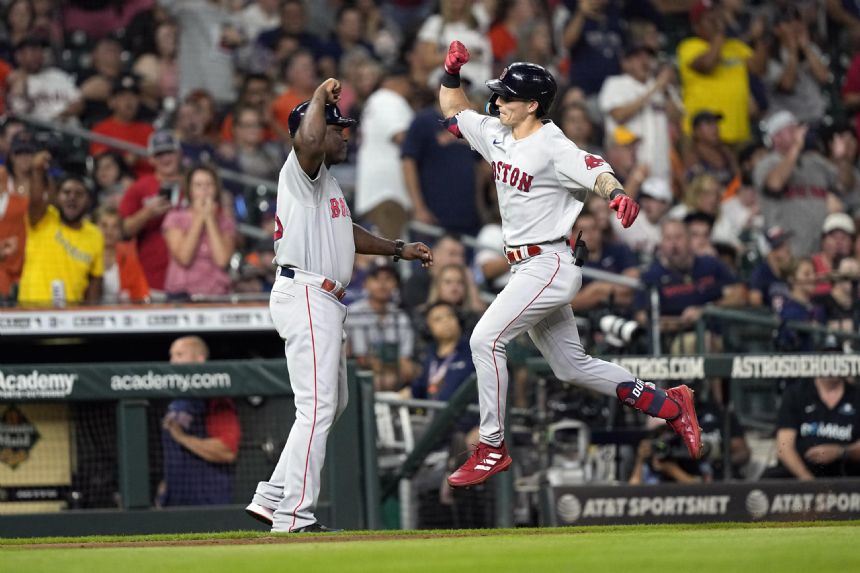 HOUSTON (AP) - Jarren Duran homered and drove in a career-high three RBIs, and the Boston Red Sox overcame sloppy fielding early for a 3-2 win over Houston on Monday night, as the Astros made a pair of important moves a day before the MLB trade deadline.

Houston led 2-1 after scoring twice, thanks to errors in the third inning.

The Red Sox still trailed by a run when Bobby Dalbec walked to start the fifth. There were two outs in the inning when Duran smacked his second homer of the season into the seats in right field to make it 3-2.

The 25-year-old Duran got the Red Sox on the board in the third inning when he drove in a run with a ground-rule double.

Nathan Eovaldi (5-3) allowed four hits and no earned runs with six strikeouts in 6 1/3 innings to get his first win since June 8.

Martin Maldonado singled with one out in the seventh to chase Eovaldi. He was replaced by John Schreiber, and Jose Altuve grounded into a double play to end the inning.

Tanner Houck pitched a scoreless ninth for his seventh save.

It was a busy day for the Astros, who made two significant deals on the eve of the trade deadline. Houston acquired first baseman Trey Mancini from the Baltimore Orioles in a three-team trade, and then added catcher Christian Vazquez in a deal with the Red Sox.

Vazquez was in the Red Sox lineup before being scratched just minutes before the game. Now, with a move to the other clubhouse at Minute Maid Park, he'll try to help the Astros make another deep playoff push.

The Astros went 1 for 8 with runners in scoring position while playing without third baseman Alex Bregman, who went on the paternity list Monday after his wife Reagan went into labor with their first child.

Dalbec doubled to open the third and scored on the ground-rule by Duran to put the Red Sox up 1-0.

The Astros tied it when Altuve scored on a sacrifice fly by Yordan Alvarez. A double by Aledmys Diaz came next to send Gurriel home and put Houston up 2-1.

Astros: RHP Lance McCullers will make his third rehabilitation start for Triple-A Sugar Land on Tuesday night. McCullers, who has been out all season with a forearm strain, threw 52 pitches in three innings in his last start and is expected to pitch longer Tuesday. ... INF Taylor Jones was recalled from Sugar Land to take Bregman's spot on the roster.