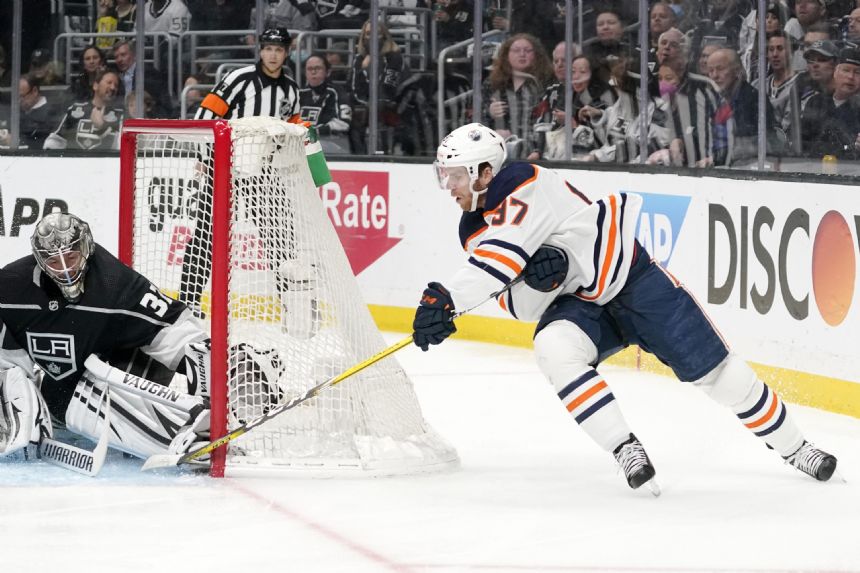 LOS ANGELES (AP) - Evander Kane had two goals and an assist, Connor McDavid added a goal and two assists, Tyson Barrie scored the go-ahead goal in the third period and the Edmonton Oilers avoided elimination with a 4-2 victory over the Los Angeles Kings in Game 6 of their first-round Western Conference series.

Cody Ceci added a pair of assists and Mike Smith stopped 30 shots for the Oilers, who host the deciding game Saturday night in Edmonton.

Sean Durzi and Carl Grundstrom scored for Los Angeles, which was looking to wrap up its first series since defeating the New York Rangers in the 2014 Stanley Cup Final. Jonathan Quick made 33 saves.

Barrie gave the Oilers a 3-2 lead at 14:50 of the third with a snap shot inside the far post after getting the pass from Leon Draisaitl. Kane then added an empty-net goal with one minute remaining.

McDavid scored on a wraparound 1:40 into the game for his third goal of the series. It was the third-fastest goal by an Edmonton player when facing elimination.

Kane extended the lead with a redirect of Brett Kulak's shot from the point at 1:50 of the second period. It was his first goal since he had a hat trick in the Oilers' 8-2 victory in Game 3.

Rookie defenseman Durzi got Los Angeles on the board at 13:59 of the second period on the power play with his first goal of the postseason, a one-timer from the center point.

Grundstrom had the equalizer 29 seconds into the third with a slap shot over Smith's blocker after getting the feed from Matt Roy.