Kansas vs. Texas Tech score: No. 5 Jayhawks survive scare from No. 13 Texas Tech in double-overtime thriller 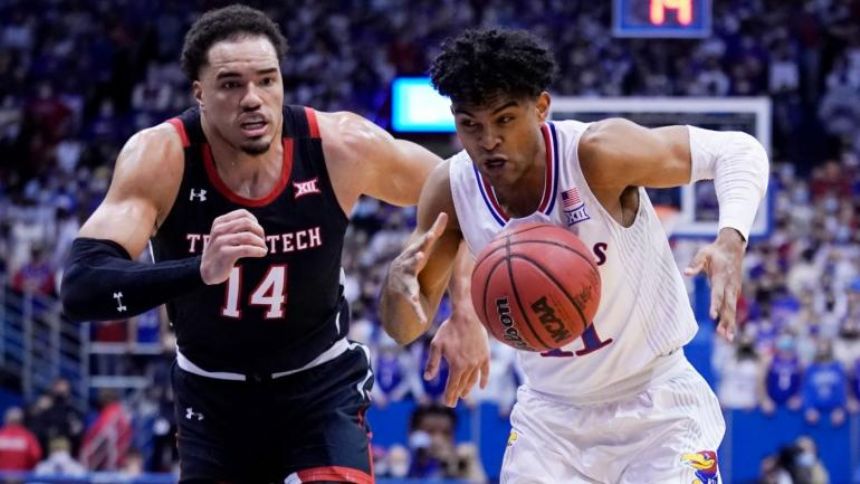 Justtwo days after Kansas logged a school-record comeback in a breathe-into-a-paper-bag-close win at Kansas State, the Jayhawks tested their fans' cardiac limits once again in an instant classic, with No. 5 Kansas escaping No. 13 Texas Tech 94-91 in double overtime. Kansas rallied from five points down in the final 1:30 in the first overtime to tie the game at 86 on an Ochai Agbaji 3-pointer with seven seconds left, then made its free throws late in the second overtime to pull out the victory.

For much of the game, Kansas didn't look like the team that would have to pull off a daring comeback. The Jayhawks, a new No. 1 seed in Jerry Palm's latest Bracketology, led 70-58 with just under six minutes remaining. But Texas Tech, buoyed by a dominant performance from Bryson Williams, ended regulation on a 17-5 run, finishing the first 40 minutes deadlocked at 75 when Agbaji's final attempt missed.

In the second overtime, Kansas took a one-point lead at 92-91 on a free throw from Jalen Wilson, then stretched that to three points on two more by Christian Braun with 10.1 seconds left. Texas Tech's final attempt, an off-balance 3-pointer from Terrence Shannon bounced to Kansas guard Dajuan Harris, who dribbled out the clock.

Agbaji set new career highs in points (37) and made 3-pointers (seven), including the game-tying 3-pointer late in the first overtime. Kansas needed all of those points to fend off Jayhawk-killer Williams, who scored 33 for the Red Raiders. In three games against the Jayhawks over the last two years, Williams averaged 26 points per contest.

The victory earned Kansas (17-2, 6-1 Big 12) a season split with the Red Raiders (15-4, 5-3), while also providing an extra game's distance over one of the league's contenders. Baylor now sits alone in second place at 5-2 in league play. Both teams will next take the court in Saturday's SEC/Big 12 Challenge, with Kansas hosting Kentucky and Texas Tech inviting Mississippi State to Lubbock, Texas.