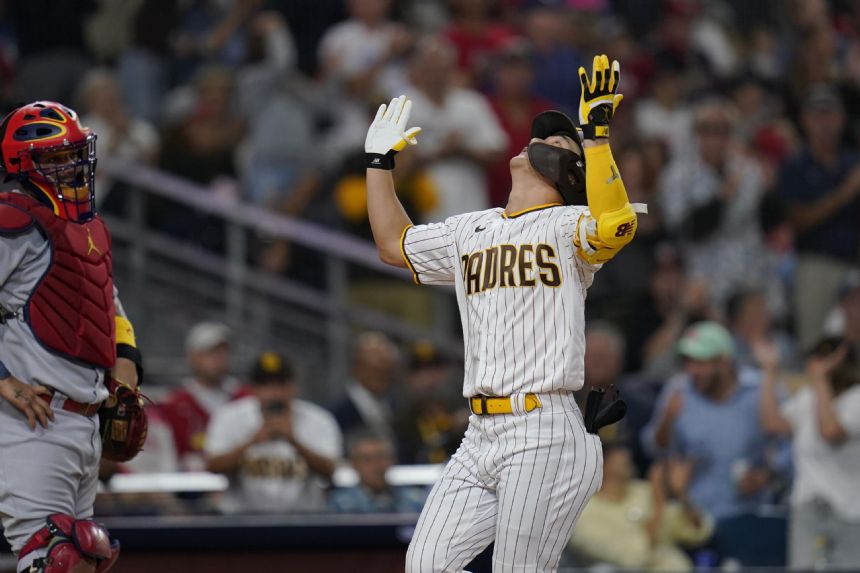 SAN DIEGO (AP) - Kim Ha-seong homered and Mike Clevinger had a strong outing for the San Diego Padres, who shut down Albert Pujols and the NL Central-leading St. Louis Cardinals 5-0 Tuesday night to clinch their first winning record in a full season since 2010.

Pujols remained at 698 career homers. He's trying to become the fourth major leaguer to reach 700 homers, following Barry Bonds (762), Hank Aaron (755) and Babe Ruth (714). He walked and singled off Clevinger, grounded out to shortstop against Nick Martinez and singled off Luis Garcia with two outs in the ninth.

The Padres winning record in a full season is the first for general manager A.J. Preller, who took over late in the 2014 season. The Padres were 37-23 in the pandemic-shortened 2020 season, when they won a wild-card series against the Cardinals before being swept in the NL Division Series by the eventual World Series champion Los Angeles Dodgers.

Kim homered to left off Adam Wainwright (11-10) with two outs in the fourth, his 10th, for a 3-0 lead. Manny Machado lobbed an RBI single into shallow right with one out in the fifth and Juan Soto hit a run-scoring single to right off Packy Naughton with two outs in the seventh.

Jake Cronenworth hit a two-run, opposite-field single with two outs in the first.

Clevinger (6-7) held the Cardinals to three hits in 5 2/3 innings while striking out three and walking two. Padres starters have a scoreless streak of 20 2/3 innings. The right-hander got the hook after allowing a double to Paul Goldschmidt with two outs in the sixth and then hitting Nolan Arenado with a pitch. Martinez came on and retired Corey Dickerson.

Wainwright allowed four runs and six hits in six innings, walked two and struck out one.

Hall of Fame closer Trevor Hoffman and third baseman Manny Machado of the Padres presented custom surfboards to the retiring Pujols and Yadier Molina at home plate before the game. Pujols got a longboard while Molina got a regular surfboard. The boards feature photos of the players, their names, numbers and nicknames - The Machine and Yadi. Cardinals manager Oliver Marmol accepted on behalf of Molina, who was warming up Wainwright in the bullpen.