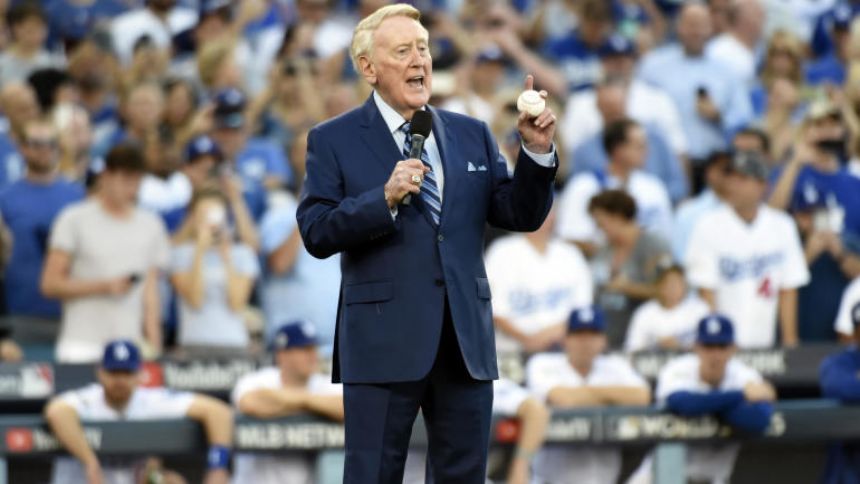 Long-time and legendary broadcaster Vin Scully died Tuesday, the Dodgers have announced. He was 94 years old.'

"He was the voice of the Dodgers, and so much more. He was their conscience, their poet laureate, capturing their beauty and chronicling their glory from Jackie Robinson to Sandy Koufax, Kirk Gibson to Clayton Kershaw.' Vin Scully was the heartbeat of the Dodgers - and in so many ways, the heartbeat of all of Los Angeles," the team said in a statement.'

"Vin Scully was the heartbeat of the Dodgers -- and in so many ways, the hearbeat of all of Los Angeles."'

Scully started his broadcasting career in 1949 after attending Fordham University, where he studied journalism and was a student broadcaster. He joined the Dodgers radio and television booths in the 1950 season, when they were still in Brooklyn. Scully came with the Dodgers to Los Angeles in 1958 and stayed with the club until his retirement in 2016.'

He also worked national broadcasts for Major League Baseball, the NFL and the PGA Tour. He worked for AP Sports from 1975-82 and NBC Sports from 1983-89.'

Scully was inducted into the Baseball Hall of Fame as the Ford C. Frick Award winner in 1982 and received the Commissioner's Historic Achievement Award from Bud Selig in 2014. He also has a star on the Hollywood Walk of Fame and received the Presidential Medal of Freedom in 2016.'

"We have lost an icon," Dodgers president and CEO Stan Kasten said in a statement. "The Dodgers' Vin Scully was one of the greatest voices in all of sports. He was a giant of a man, not only as a broadcaster, but as a humanitarian. He loved people. He loved life. He loved baseball and the Dodgers. And he loved his family. His voice will always be heard and etched in all of our minds forever. I know he was looking forward to joining the love of his life, Sandi. Our thoughts and prayers go out to his family during this very difficult time. Vin will be truly missed."'