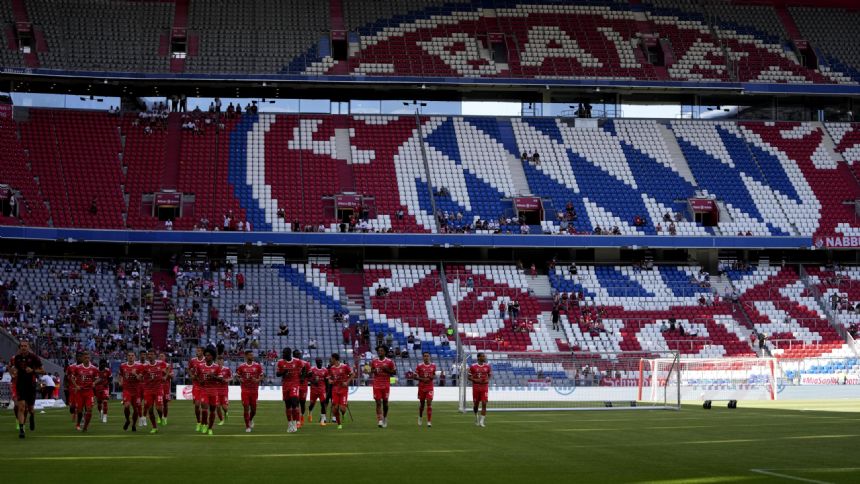 BERLIN (AP) - Even with Robert Lewandowski leaving, Bayern Munich is getting stronger.

The 10-time defending champions have not only signed two outstanding forwards to replace the Barcelona-bound Lewandowski, they have also embellished the squad with a host of other youngsters.

Senegal forward Sadio Mane has arrived from Liverpool to help make up for Lewandowski's 35 goals in 34 Bundesliga games last season, while Bayern also agreed to pay up to nearly $30 million to Rennes for French teenager Mathys Tel last week. The 17-year-old Tel didn't score a goal in nine appearances for Rennes, but such is his promise that Bayern moved to sign him before any other rivals pounced.

Bayern also signed Netherlands defender Matthijs de Ligt to shore up a back line that looked fallible on some occasions last season. Bayern missed the cool-headed authority of David Alaba, who left for Real Madrid last year, and signed the 22-year-old De Ligt for his organizational qualities.

De Ligt was Ajax captain, the Dutch team's youngest, before he joined Italian club Juventus in 2019. It hasn't taken him long to assume a leadership role at Bayern, where he has already been directing his teammates in preseason training.

Bayern also added 24-year-old Morocco right back Noussair Mazraoui and 20-year-old Netherlands midfielder Ryan Gravenberch - both from Ajax - to give coach Julian Nagelsmann even more options in an enviable squad.

Bayern has won the last 10 Bundesliga titles and has quickly snuffed out any rivals' hope that its dominance was waning after failing to convince Lewandowski to stay and add to his 344 goals in 375 competitive games for the club.

"Bayern Munich is the No. 1 top favorite," Borussia Dortmund chief executive Hans-Joachim Watzke said even before Bayern signed Tel. "They're losing an outstanding player in Lewandowski, but are getting two more outstanding players in Mane and de Ligt."

Speaking to news agency DPA, Watzke said there was little hope of a shift in power between the two rivals.

"What Bayern have done so far in transfers has to be earned," Watzke said. "But that's nothing new. It won't flip the financial might of the Bundesliga but consolidate it further."

But Haaland's replacement, Sebastien Haller, was diagnosed with a testicular tumor shortly after his signing from Ajax, and Dortmund said last week that the Ivory Coast forward will be out for at least two months.

Dortmund also signed Germany forward Karim Adeyemi from Salzburg - though he's not a natural replacement for Haaland - and Germany defenders Nico Schlotterbeck and Niklas Sule. Edin Terzic has returned as coach to take over from successor Marco Rose, and it remains to be seen if he can mold a sustained challenge to Bayern.

Leverkusen midfielder Robert Andrich knows who the title favorite is.

"We don't need to waste any big words on the title race," Andrich said. "Of course we always want to stand up to them, but we're definitely not going to stand up and say that we're going to be champions."