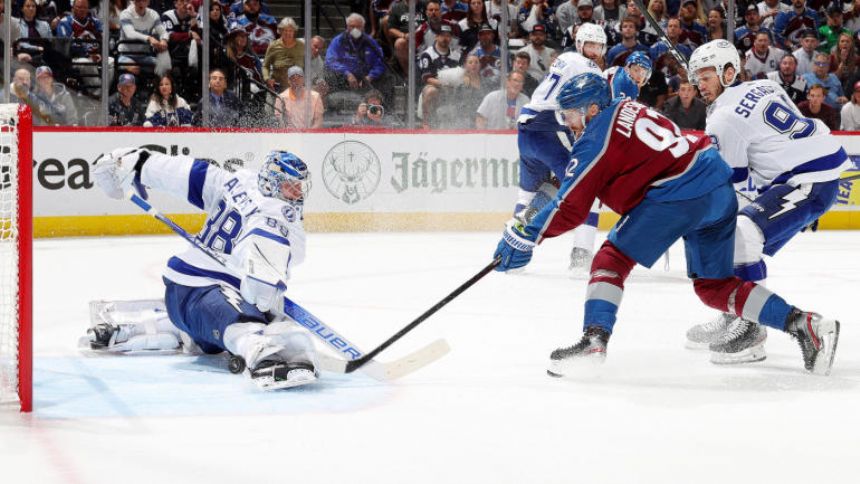 The Tampa Bay Lightning faced several challenges during the first three rounds of the postseason and overcame them, as you would expect from two-time defending champions. They now are presented with what arguably is their toughest obstacle yet, and they'll need to begin climbing it when they host the Colorado Avalanche on Monday in Game 3 of the 2022 Stanley Cup Final. Tampa Bay rallied from a 3-2 series deficit against Toronto in the first round and, after sweeping Presidents' Trophy-winning Florida, lost the first two games of the Eastern Conference final to the New York Rangers before posting four straight victories. The Lightning again are down 0-2 in this series after being outscored 11-3 over the first two games in Colorado.'

Opening face-off for Game 3 is set for 8 p.m. ET. Tampa Bay and Colorado both are listed at -110 in the latest Lightning vs. Avalanche odds from Caesars Sportsbook, while the over-under for total goals scored is six. Before making any Avalanche vs. Lightning picks or 2022 Stanley Cup Final predictions, you need to see what SportsLine expert Matt Severance has to say.

Severance is a well-connected writer and handicapper who has worked in the industry since 2005. He is SportsLine's top NHL handicapper, going 136-71-4 in his last 211'NHL picks and returning well over $2,900 for $100 players. Anyone who has followed him is way up.

Tampa Bay has won seven straight at home since losing 5-2 to Toronto in Game 3 of its first-round series. The Lightning have outscored their opponents 27-11 during the winning streak and yielded fewer than two goals in four of the last five contests in their own building. The return home will be a breath of fresh air for Andrei Vasilevskiy, who was torched for a playoff career-worst seven goals in Game 2.

The reigning Conn Smythe Trophy winner has been stellar on his own rink, posting a 1.69 goals=against average and .947 save percentage in eight games. Vasilevskiy has been especially superb in his last five home contests this postseason, turning aside 165 of the 170 shots he has faced. Offensively, Nikita Kucherov, who led the NHL in playoff scoring each of the last two years, is tied for third this postseason with 24 points.'

Colorado has been virtually unstoppable this postseason as it has produced a league-leading 76 goals over 16 games. The Avalanche have netted five or more goals in half of those contests and recorded at least seven on four occasions. They've scored 11 goals in the first two games of the 2022 Stanley Cup Final without much help from Nathan MacKinnon, who has notched just one assist in each contest.

The 26-year-old center is tied for second in the league with 11 playoff goals and has notched at least one point in 14 of his 16 contests. Cale Makar scored twice on Saturday, joining Boston's Glen Wesley (1988) as the only defensemen in history to have both a power-play and short-handed goal in the same Stanley Cup Final game.

Severance has analyzed Game 3 of Avalanche vs. Lightning from every angle and is leaning over on the total. He's also found a critical x-factor that has him jumping all over one side of the money line. You can only get the pick at SportsLine.

So who wins Lightning vs. Avalanche in Game 3 of the 2022 Stanley Cup Final? And which critical x-factor makes one side hit hard? Visit SportsLine now to see which side of the Avalanche vs. Lightning money line to jump on, all from the expert who has crushed his NHL picks, and find out.