Liverpool beats Villa 2-1, level on points with City in EPL 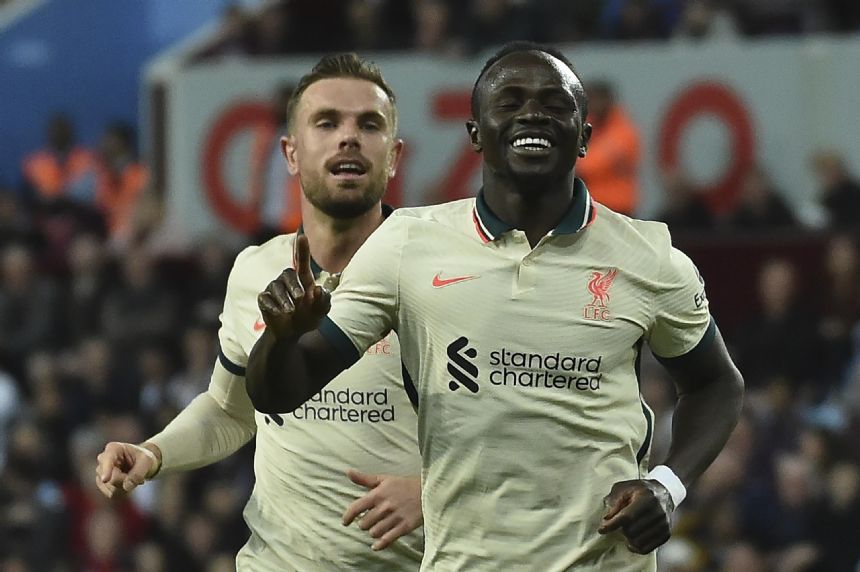 BIRMINGHAM, England (AP) - Liverpool recovered from conceding in the third minute to beat Aston Villa 2-1 and move level on points with Manchester City in the Premier League title race on Tuesday.

City, which leads thanks to its superior goal difference, plays its game in hand against Wolverhampton on Wednesday. The two title rivals will then only have two more league games to play.

Sadio Mane scored the winner for Liverpool at Villa Park, heading home a cross from Luis Diaz in the 65th minute.

Liverpool had fallen behind to Douglas Luiz' close-range strike, only to equalize three minutes later when Joel Matip converted into an unguarded empty net after fellow center back Virgil van Dijk had a shot saved.

The Reds, who drew 1-1 with Tottenham on Saturday, avoided having their title bid further derailed by a Villa team managed by one of their greatest players.

Steven Gerrard, a boyhood Liverpool fan and former star midfielder, insisted his focus was purely on winning the game for Villa. His team can still have a massive say in the title race, with Villa playing at City on the final day of the season.

Liverpool lost Fabinho in the 30th minute to a hamstring injury that could potentially rule the holding midfielder out of the FA Cup final against Chelsea on Saturday.

Ahead of that game at Wembley Stadium, Liverpool manager Jurgen Klopp chose to leave out left back Andrew Robertson from the squad entirely and begin with Mohamed Salah and Thiago Alcantara on the bench.

The win saw Liverpool reduce the gap on goal difference to City to 3.

Liverpool finishes the league campaign with games against Southampton and Wolverhampton next week.

City's final two games are against West Ham and Villa.