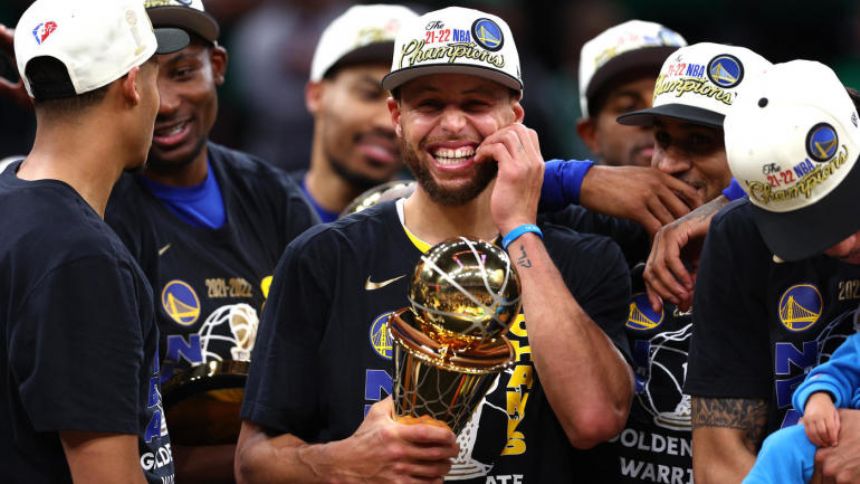 Steph Curry earned his fourth NBA title by leading his Golden State Warriors back from a 2-1 deficit to defeat the Boston Celtics in the NBA Finals. It turns out Curry had another comeback in him. During Thursday night's celebration, the two-time MVP held the Larry O'Brien Trophy in one hand and a specific green T-shirt in the other to send a message to a local Boston bar.

Earlier this week, Curry took part in a with a business called Game On! at Fenway Park. The establishment did a little trash talking with some handwritten signs on their sidewalk, one of which read, "Ayesha Curry can't cook."'

That's the same message on the T-shirt Curry held up in his Instagram photo.'

"Bye Boston!" he wrote, giving attention to detail by adding a pair of chef emojis.

The comeback was certainly predictable, as Curry himself wore a T-shirt referencing the bar's sign after Game 5. That one had a slightly different message: "Ayesha Curry CAN cook." Curry's wife, Ayesha Curry, is a chef and cookbook author.'

It's unclear if Curry himself knows his way around the kitchen, but he is definitely a chef on the basketball court. The 34-year-old lifted the Warriors to their seventh franchise title with a solid 34-point performance in Game 6, a contest in which he shot 54% from the field and made six 3-pointers.'

Curry's T-shirt wasn't the only shoutout to his doubters. During Thursday's postgame press conference, Curry brought up "some talking heads" who said the Warriors would win "zero" championships in the near future.

Steph hears and remembers everything pic.twitter.com/mb5dLn8qO1

Curry has seemingly embraced his petty side, even admitting earlier this week he is definitely not above engaging in some friendly banter.

"I'm the petty king. So I know all about everything and I use it as entertainment and have fun with it," he said.