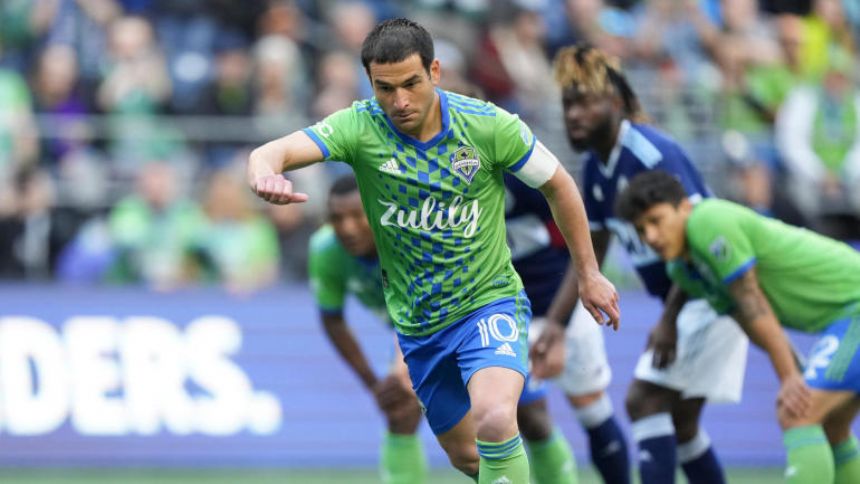 Two of the best teams in MLS face off Saturday in a Western Conference showdown between the Seattle Sounders and . LAFC (9-2-3) sits atop the West and has scored the most goals in MLS. Seattle (6-1-6) is seventh in the conference but won the Concacaf Champions League in May and is now set to focus on domestic success. Seattle was the first American team to win that Concacaf title. The Sounders were the preseason favorite to win the MLS title and are coming on strong after injuries and the distraction of the cup competition led to a slow start. They crushed the Vancouver Whitecaps 4-0 on Tuesday, while LAFC hasn't played since a 3-2 win against the on May 28.

Kickoff is set for 3 p.m. ET at Lumen Field in Seattle. Caesars Sportsbook lists Seattle as the +125 favorite (risk $100 to win $125) on the 90-minute money line in its latest Seattle Sounders vs. LAFC odds. LAFC is the +210 underdog, a draw is priced at +250 and the over-under for total goals scored is set at 2.5. Before making any LAFC vs. Seattle Sounders picks or MLS predictions, you need to see what SportsLine soccer insider Martin Green has to say.

After working in the sports betting industry for several years, Green became a professional sports writer and handicapper and has covered the game worldwide. Since then, his European soccer picks have been stunningly accurate. Green has generated more than $37,000 for $100 bettors since the 2017-18 season, and he is 10-7 in his last 17 soccer picks overall. He has his finger on the pulse of the game all over the globe.

Now, Green has broken down the LAFC vs. Seattle Sounders matchup from every angle and just revealed his MLS picks and predictions. You can head to SportsLine now to see his picks. Here are the betting lines and trends for Seattle Sounders vs. LAFC:

The Sounders will be focused and ready to make a statement in front of their home fans. Just two of their six losses have come at home, where they have scored 12 goals and conceded six. Nicolas Lodeiro (three goals, three assists) is fully fit and leading a surging attack. Lodeiro put the Sounders on the board with an early penalty in the win against Vancouver. USMNT players Jordan Morris (three goals) and Christian Roldan (two goals, two assists) also have returned from international duty to bolster the team.

The Sounders have been one of the league's top teams for a few years, winning the 2019 title, losing in the final in 2020 and bowing out early due to injuries last year. They have lost once in the past five home meetings between these teams, outscoring LAFC 9-3 in those games.'

Los Angeles has been the most prolific scoring team in the league, posting a plus-13 goal differential, compared to plus-3 for the Sounders. The Black and Gold have scored in all but one game so far, and 13 different players have at least one goal. The team hopes star striker (six goals) will be recovered from a thigh injury in time for the match. The team made some key additions in the offseason, including , and goalkeeper Maxime Crepeau.'

Crepeau has four clean sheets, and two of those have come away from home. , who came over from Colombian squad Milionarios midway through last season, scored his third goal of the season against San Jose. scored his second in that game, and got his fourth. Hollingshead has been a surprise contributor from the defense, with his four goals coming in 11 games (eight starts). LAFC leads the league with 78 shots on target, while Seattle has the sixth-fewest with 52.'

Green has scrutinized the LAFC vs. Seattle Sounders match from every angle, and he is leaning over on the goal total. He also provides two confident best bets and has a full breakdown of the match. He's only sharing those picks here.

So, who wins Seattle Sounders vs. LAFC? And where does all the betting value lie? Visit SportsLine now to see the best bets for the LAFC vs. Seattle Sounders match, all from the European soccer expert who has generated more than $37,000 for $100 bettors over the past four seasons, and find out.