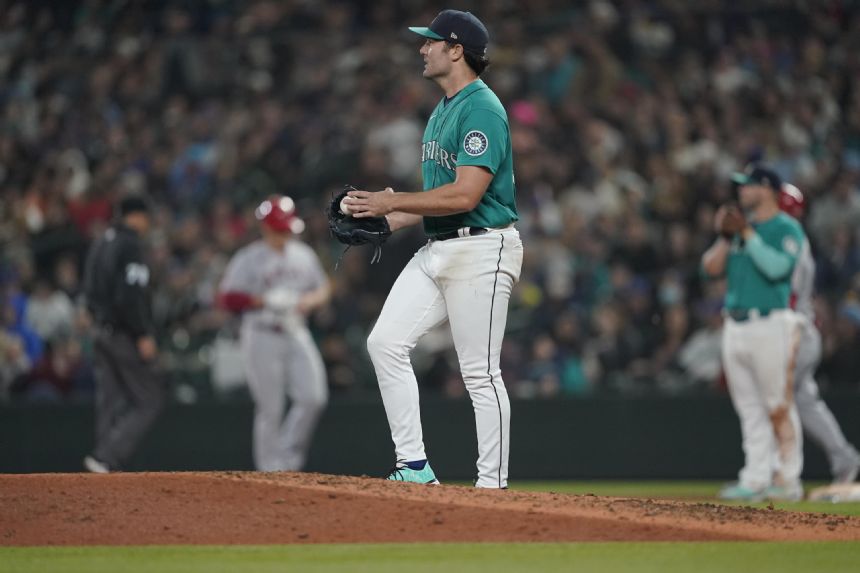 SEATTLE (AP) - Robbie Ray lost a no-hitter with two outs in the seventh inning on a grounder that bounced off his own glove in the Seattle Mariners' 8-1 victory over the Los Angeles Angels on Friday night.

Ray lost his bid when Max Stassi hit a high chopper toward the mound that went right over the pitcher's head. The reigning AL Cy Young Award winner didn't jump, and the ball skipped off the top of his glove, giving Stassi time to beat out an infield single.

The left-hander winced, then looked toward the outfield scoreboard to see the ruling from the official scorer. He smiled when Stassi was awarded a hit, ending a run of 18 consecutive batters retired.

Ray finished the seventh and came back out for the eighth, when Juan Lagares led off with a triple and scored on Andrew Velazquez's double. Ray was pulled after that, charged with a run three hits and a walk with 10 strikeouts. He got a big ovation when manager Scott Servais came for the ball.

The Angels were one out away from being no-hit by the Dodgers' Tyler Anderson on Wednesday, and the Yankees' Jameson Taillon had a perfect game against Los Angeles until the eighth inning on June 2. The Angels are the first team to break up no-hit bids after the sixth inning three times in the same month since the Houston Astros in 1984, per STATS.

Julio Rodriguez had three hits, Ty France drove in three and Cal Raleigh hit his eighth homer of the season for Seattle.

Raleigh connected in the second, a solo shot that gave Seattle a 2-0 lead. Rodriguez singled and scored in the first and added an RBI single in the third, and the Mariners blew it open in the fourth when Ty France cleared the bases with a double.

Raleigh doubled in the sixth and scored on a single from Taylor Trammell.

Roenis Elias finished the game for Seattle with a scoreless ninth inning. The Angels finished the night with four hits, two of them from Stassi.

Mariners slugger Justin Upton was hit in the head by a pitch in the fifth inning on the same day he was recalled from Triple-A Tacoma. Upton was down on the field for several minutes and was replaced by Dylan Moore.

Upton, a four-time All-Star released by the Angels in spring training, signed with the Mariners on May 21 and hit .200 with two homers and six RBIs in 12 games with the Rainiers. The 34-year-old ranks seventh among active players with 324 career home runs.

INF/OF Sam Haggerty was sent down to Triple-A after hitting .188 in 13 games this season for Seattle.

P/OF Shohei Ohtani was not in the starting lineup Friday in advance of Saturday's doubleheader. Ohtani had two hits at the plate in Thursday's game and also pitched six shutout innings. Interim manager Phil Nevin said Ohtani will play both games Saturday.

Angels: 3B Anthony Rendon will undergo season-ending surgery next week for a subluxing tendon in his right wrist, the Angels announced Friday. Rendon hit .228 this season with five homers and 24 RBI in 45 games.

Angels: The Angels will start Patrick Sandoval (3-2, 2.83) on Saturday in the first game of a day-night doubleheader against Seattle. The Angels have not announced their starter for Game Two.

Mariners: Seattle will start Chris Flexen (2-8, 4.30) in the first game of the doubleheader. The Mariners have not a starter for Game Two.