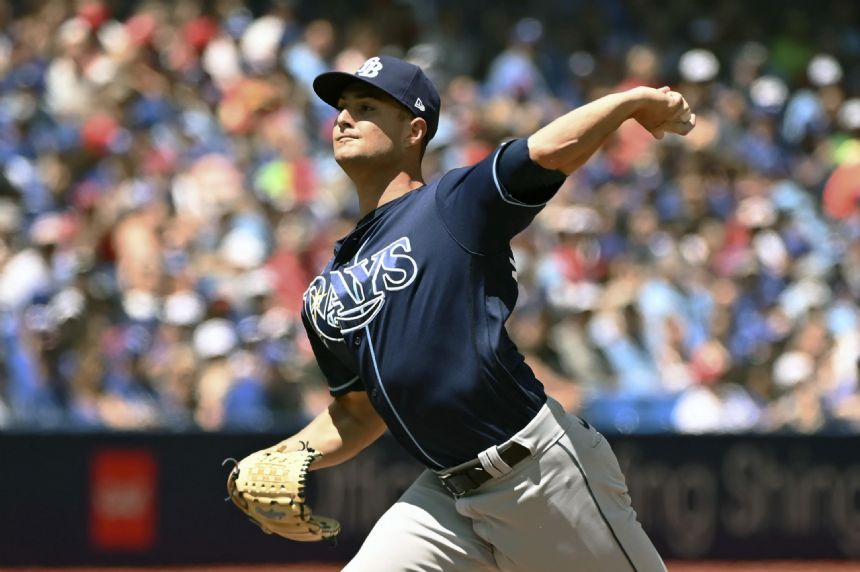 Blue Jays right-hander Kevin Gausman left after he was hit in the right ankle by Franco's 100 mph line drive in the second. X-rays were negative. The Blue Jays said Gausman had a right ankle contusion.

McClanahan (9-3) allowed three hits, walked one and struck out 10, including five of the final six batters he faced. The left-hander has not allowed more than one earned run in nine of his past 10 starts.

Javy Guerra got three outs and Phoenix Sanders finished as the Rays avoided their longest losing streak in a year, a five-game slump from June 27 to July 3, 2021.

The Blue Jays opened the scoring in the first when Bo Bichette doubled and came around on Vladimir Guerrero Jr.'s base hit.

The Rays loaded the bases in the second but didn't score. Batting with two outs, Franco laced a ball that drilled Gausman and ricocheted to catcher Gabriel Moreno, who retired Franco at first.

Gausman stumbled forward and fell face down in front of the mound after being struck. He received attention from the trainer before getting to his feet and slowly walking off the field.

Paredes homered in the third, his 12th, and Franco connected in the sixth, his fifth.

Yandy Diaz made it 6-1 with an RBI single in the eighth.

Blue Jays: RH Yimi Garcia (back) felt fine after throwing a bullpen session Saturday. Garcia has been out since June 21.

Tampa Bay optioned OF RH David McKay to Triple-A Durham and recalled RH Dusten Knight from the taxi squad. The Rays activated RH Drew Rasmussen (left hamstring) off the IL as the 27th man for the doubleheader, and added RH Cristofer Ogando to the taxi squad.

Hall of Famer Vladimir Guerrero Sr. threw out the ceremonial first pitch to Vlad Jr. on the day the Blue Jays handed out a dual bobblehead doll featuring the former Expos star and his slugging son.

McClanahan reached double digits in strikeouts for the fourth time. He also struck out 10 in his previous start, June 26 against Pittsburgh.